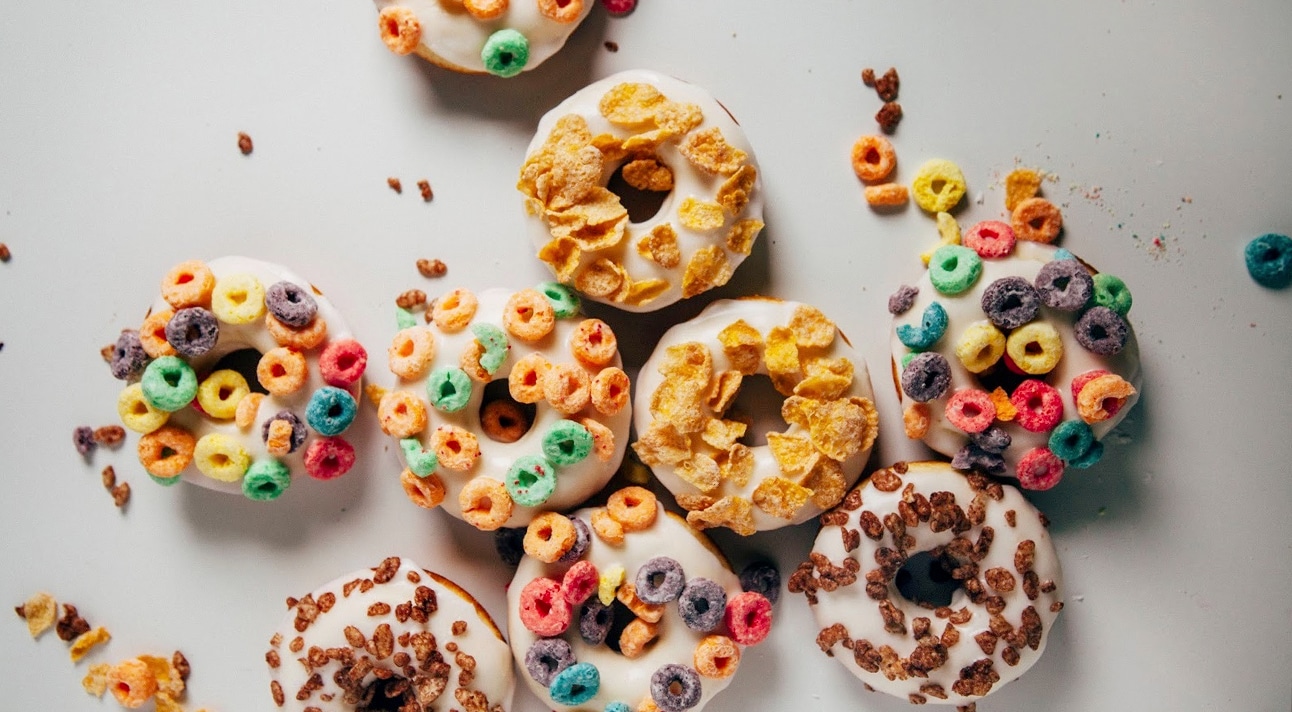 I look back on those years and feel compassion for the young woman I was.

I am sitting in the bathroom on the toilet seat at Jenny Craig eating a Dunkin’ Donuts maple glazed bear claw. There is a knock on the door. I lick the sticky sugar off my fingers.

“Just a minute,” I say flushing the toilet.

There is a poster on the wall of a before-and-after picture of a middle-aged red headed woman.

In the before picture she’s wearing an oversized polkadot tee shirt with loose culottes, her hair is frizzy, she is makeup-less and her skin looks ruddy.

In the after picture she’s smiling proudly with her hands on her hips, she’s wearing a form fitting red dress with white pumps. Her hair is straightened, her eyes shadowed a shimmery blue, lips painted a coral gloss. There’s a tape measure around her waist with a caption below:

‘I lost 25 pounds the Jenny Craig way just in time for my Wedding! Thank you Jenny Craig Team!’

I have been part of that “team” for three months.

I hide the remnants of the donut wrapper in the trash bin underneath toilet seat covers, wash my hands and open the door to the bathroom. My co-worker is standing there.

Her silky blonde hair is pulled back into a high ponytail. She wears a flowery summer dress with a thin red belt that accentuates her slender waist. Is she a ‘normal’ eater? Does she eat pasta for dinner and two cookies for dessert without eating the whole bag?

“Are you feeling okay?” she asks. “You were in there a while.”

“You’re client is waiting for you.”

As I walk back to my office I tell myself, “tomorrow, tomorrow, I’ll stop with the donuts.”

If only Dunkin’ Donuts wasn’t next door. Why couldn’t it be Pinky’s Nails or Wells Fargo?  Anything but a donut shop and the warm smell of sugar drifting towards me when I arrive for work every morning.

A stocky mother in khakis and a blue button-up is sitting with her daughter in front of my desk. Before I even sit down she starts talking.

“I keep telling my daughter she’ll lose the weight if she just sticks to the meal plan.”

The girl is a sophomore in high school. She is pretty, a round figure, one that I imagined guys would consider to be ‘yummy’. She seems shy and insecure the way her gaze rests on the floor, her chestnut colored hair falling over her almond-shaped eyes.

Looking at her I remembered my own mother telling me when I was the same age to eat nothing but watermelon for a week. My mother was beautiful. I wanted to be like her, look like her.

‘I’ll eat watermelon for two weeks,’ I told myself. And I did. Day fifteen I sat alone in a booth at IHOP. “I’ll have a stack of blueberry pancakes with extra butter please,” I told the waitress.

“Well, the meal plan is important,” I tell the mother and daughter. “There are so many delicious choices. And don’t forget, you can eat all the vegetables you want in between meals.”

What I really want to tell her is the meal plan is stupid and not worth the money and that if I didn’t desperately need a job I would quit tomorrow. And also for her mom to not pressure her daughter, that she’s beautiful as she is.

“How do you maintain your figure?” the mother asks me.  “Have you done the meal plan?”

I wasn’t lying. I had. It was part of the mandatory seven-day training.

Only I didn’t tell her I was starving on it and kept protein bars in my purse to eat in the bathroom during break times or that on the way home every day I stopped for a pint of frozen yogurt.

I also didn’t tell her that my regular method consisted of binging on meatball subs and chocolate malts for days followed by a week of an extensive exercise routine and either the maple syrup cayenne pepper fast or the cabbage soup diet.

Or that I’m sure I would have been a bulimic if I had been able to bring myself to stick my finger down my throat.

Now, a decade later, I look back on those years and feel compassion for the young woman I was. For the negative body image, insecurity and self-loathing I had. The way food ruled and shaped my days. I remembered thinking how desperately I wanted to be free of the obsession but couldn’t ever imagine that happening.

I can’t say when exactly something shifted but over the years I have changed. I don’t hide in bathrooms anymore shamefully eating or obsessively think about food and my body all day every day.

I still don’t consider myself a ‘normal’ eater or someone who can live with chocolate chip cookies and salted caramel ice cream in the house without being worried about staying away from it. And I’ve still been known to pour dish soap on leftover food for fear of coming back to it late in the night but comparatively speaking something over the years has lifted.

I am not consumed by thoughts of food. I don’t binge, do fad diets or exercise compulsively. Yes, I do mainly eat proteins, fruits, and vegetables, but I am able to go out with friends for dinner and share a decadent dessert, eat a cream puff or the icing off a cupcake, or two, and to do so without feeling guilty.

For a woman like me that is far more than I ever expected. Maybe in my fifties, I’ll even be able to live with thickly frosted cake in the fridge and go to bed peacefully without having poured dish-soap on it so I won’t be tempted.

This story was republished from Yourtango with full permission. You can read the original article here.