Do you believe in love at first sight? And are you an incurable romantic?

If you answered yes to either of these questions you’ll adore Disney’s Cinderella, a live-action new film inspired by the classic animated fairytale, which opens in cinemas Thursday, March 26. I was fortunate enough to see the film at a media preview and I loved it.

I found it an utterly charming and enjoyable movie experience, not the least of which because of its sumptuous costuming and visually spectacular cinematography. There’s not much not to love about costume designer Sandy Powell’s amazing work here and Cinderella’s puff-ball, butterfly-motif dream dress and accompanying magical glass slippers are awe-inspiring – the stuff of a billion little girls’ (and big girls’) fantasies. 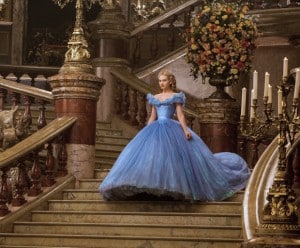 In addition, actor Lily James, who’s of period drama Downton Abbey fame, is the perfect modern embodiment of Cinderella; a new style muse to love who’s thrilled at every red carpet Cinderella premiere since it first opened in the US, smashing the box office with a $70 million opening weekend last week.

However, I must confess I wasn’t expecting to enjoy actor and director Kenneth Branagh’s re-imagining of Disney’s 1950 masterpiece quite so much – I’m no fan of the “princess myth” and abhor it when women describe themselves thus.

For, life ain’t no fairytale, as we all know, and all good love affairs require endless love, patience, forgiveness and understanding. In addition, let’s raise our daughters to be smart and skilful warriors in the driver’s seat of their lives, not merely pathetic, passive princesses expecting to be swept off their feet.

But if you can quieten your inner-cynic, lady, while watching the film, as I did – it’s a fairytale after all – you may well love it too. What’s more, actor Lily James’s spirited Cinderella possesses a quiet strength, and admirable feistiness, kindness and tenacity, which makes her a highly watchable heroine. 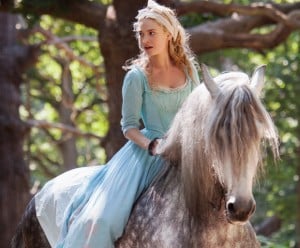 She’s all blonde bombshell – she ain’t no fragile, hapless princess in a tower – it’s surprisingly moving and sad to watch this Cinderella summon all her courage to pick up the pieces after her beloved mother and father both die.

This soulful, loving and brave Cinderella must find joy in great darkness – such as when her wickedly cruel stepmother, played with great panache by “Queen” Cate Blanchett (pictured), and wile, evil and vacuous step-sisters treat her like little more than a servant – as the classic tale goes. Yet, despite the brutality and spitefulness inflicted upon her, Cinderella is determined to honour her mother’s dying words and to “have courage and be kind,” which brings us to the movie’s central theme. 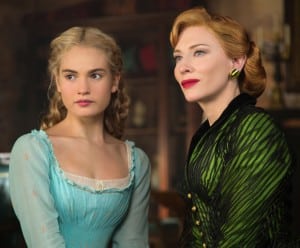 And as the mother of two toddler daughters, I see the power and appeal in these words and think it’s a highly commendable message for all – it’s still poignant and important today and so the ancient fairytale never loses its lustre. I’m certainly striving to teach my girls this and set them a good example by behaving the same. And, speaking of kindness, it was heartening to see all the cute daddy and daughters enjoying themselves at the movie preview.

But back to the film – the best actor in it is by far, in my opinion, the incomparable, Bafta-winning Helena Bonham Carter (pictured) who lends her own special brand of magic and kookiness to the role of Fairy Godmother. Bonham Carter’s performance is worth the admission price alone – she even managed to outshine our queen Cate. 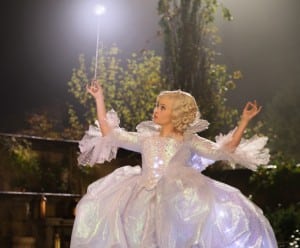 And, interestingly, the scene in which her Fairy Godmother transforms Cinderella’s torn dress into her stunning ball gown is said to have been the late Walt Disney’s favourite sequence of animation. In addition, Cinderella is also believed to have been his favourite Disney film of all time. Yay, Walt – I’m inclined to agree with you on both points.

This scene was, by far, my favourite of the film too; you can’t help but be swept away by the romance of it all, thanks to the fabulous and clever special effects. Actor Richard Madden, of Game of Thrones infamy, does his best to play a dashing Prince Kit, who’s immediately impressed by the spirited and smart Cinderella. 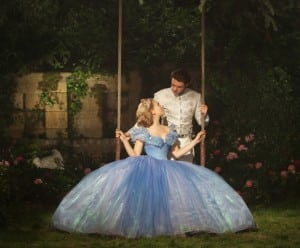 Ah, who can resist a little sprinkling of Disney magic? Enjoy.