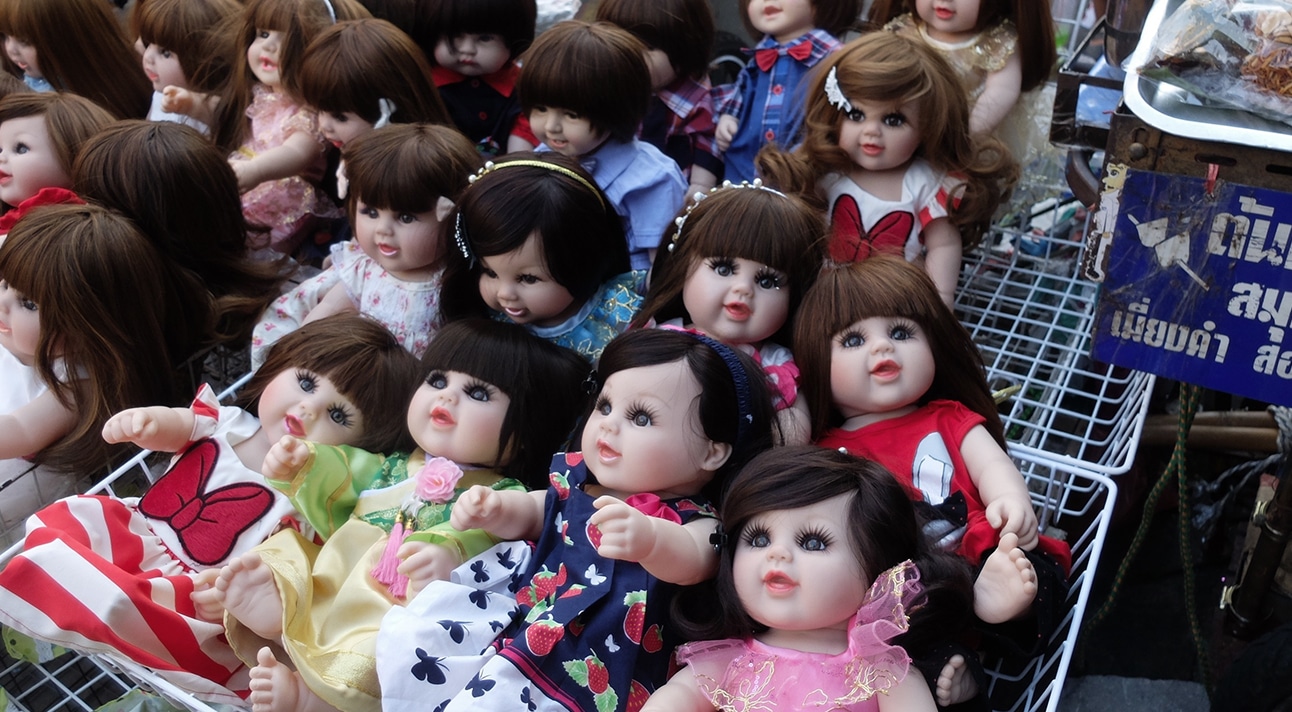 I Stopped Trying To Sexually One-Up His Ex, And I’m So Much Happier

When I was little, I was really into dolls. I mean, really into them. When our family went out to dinner, I’d take my Cabbage Patch Kid with us, along with her paraphernalia. I’d clip her into her little booster seat and tie a bib around her neck before pretend-feeding her with her little spoon. Her name was Sara, and I felt true and deep love for that doll.

My older siblings gave me no end of crap about Sara, and even my parents were a little weirded out by my level of devotion. I kept this up until I was ten years old, maybe a little longer, and then finally gave in, grew up, and tucked Sara into the back of my bookcase, behind my collection of Sassy magazines. But maybe I didn’t have to.

Two years ago, Thai Smile Airways made headlines when they started allowing travelers to buy seats for their dolls. This wasn’t an attempt to cater to children, but to adult women who take their creepily life-like dolls, known as luk thep dolls, with them everywhere. These women treat the dolls like real human children, caring for them as if they were actually alive. In fact, it’s not just women buying plane tickets for dolls: Celebrated Thai actor and comedian DJ Bookko brings his luk thep doll (named Wan Sai) with him to public appearances, and posts pictures with him on social media.

Luk thep means child angel, and the woman behind the phemonomon, Mama Ning, says she matches her custom-made dolls with “adoptive parents” through a spiritual process of discernment. Ning has a devoted group of women who follow her teachings, which grow out of ancient folklore that says the dolls can bring good luck to their owners. Long ago, kuman thong figurines were made from the bodies of stillborn babies, and families kept them close, as talismans against evil. The dolls are said to protect against alcoholism and other addictions, as well as family troubles; they’re seen as some combination of therapeutic and magical.

“There’s a lot of overlap with animism, Taoism and Hinduism, which is where the luk thep come in,” explains Bangkok-based photojournalist Amanda Mustard, who follows and documents the popularity of the dolls. She says people who own (or rather, adopt) the dolls believe that taking care of them will bring them luck. While some people simply keep the dolls in their home or business, others go above and beyond to be good “mothers” to the dolls, setting up play dates, changing their clothes, and even hiring babysitters to take care of them. Some restaurants in Thailand even offer special menus for the dolls – something no one ever offered to my beloved Sara.

If all this sounds bizarre, think again. Do you have an item of clothing or jewelry that you always wear for luck? Perhaps some small bauble that you keep in a pocket or purse “Many people wear amulets for various purposes of bringing good fortune and merit, and I think the luk thep dolls are just an extension of that,” Mustard told Time. I gave Sara away years ago, but lately I’ve been keeping a piece of rose quartz in my pocket, where I rub it with my thumb whenever I feel anxious. (Rose quartz is supposed to open your heart and promote love, peace, and healing – something I certainly need.)

For his part, DJ Bookko says his luk thep doll is his friend, and brings him happiness. “People have different beliefs. Some may have faith in it, some may not. That’s all fine. I don’t care how people look at me, I’m happy when I’m with Wan Sai.”

There has definitely been some backlash to the popularity of the luk thep dolls, however. While they can get seats on airplanes, and some restaurants offer them food, other businesses have banned them, citing fears of “black magic.” And the Thai Civil Aviation Authority ruled that even if a “parent” has bought a seat for their doll on their flight, they must still put it through security scanners first, like any other piece of luggage.

In the United States, there’s a subculture of women who care for lifelike dolls that look quite similar to the luk thep dolls. You can see them on YouTube, where some of the more disturbing videos show women changing diapers and cleaning up after their dolls when they’ve gotten “sick.” Somehow, though, the absence of an ancient tradition of good luck and spirituality makes these women seem more deranged and sad than the people who care for luk thep dolls, who more easily come off as charming and quirky.

The reality is, many of the people (mainly women) who take care of these dolls may have lost children, or were unable to have them. The dolls give them an outlet and a way to heal. Who are any of us to judge? Photojournalist Mustard met a family in Thailand who said that although they had a son, they’d long wanted a daughter and couldn’t have one. Adopting luk thep doll “Natalie” was helping them through their grief over that lost dream.

Something to believe in

It’s easy to laugh at these women, and easy to be creeped out by big-eyed silicone dolls. But whether the dolls are therapeutic or good luck charms, if you find the whole thing weird, it’s worth thinking about what gives you comfort, and what you believe in.

Me? Besides rubbing my rose quartz stone, I go to church every Sunday and eat a piece of bread that’s supposed to be the body of Jesus. I dip it in wine that represents his blood. How weird is that? My religion is both a belief system and a source of comfort for me. It gives me a sense of security, and a framework to help me make sense of my life.

There’s a point of view prevalent among people who consider themselves intelligent and worldy that belief systems are for the weak-minded, or the intellectually soft. It’s not very cool to be a person of faith, whether that faith is in luk thep dolls, Jesus, or something else. But bestselling author and spiritual teacher Marianne Williamson argues that believing in a higher power isn’t only “for those of us not smart enough to understand the facts of the real world.” On the contrary, writes Williamson, “Spirituality reflects the most sophisticated mindset, and the most powerful force available for the transformation of human suffering.”

So, what is it that you believe in? Before you dismiss someone else’s beliefs as weird or creepy, you might want to give it some thought.

Comment: What do you think of the luk thep doll phenomenon?