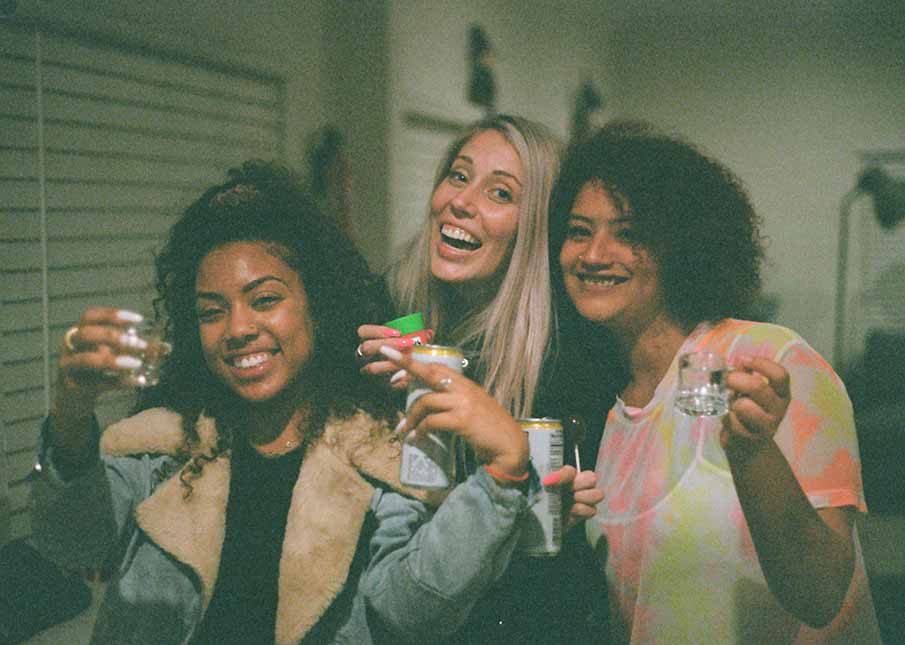 You might want to make super alcoholic cocktails to inject some liquid confidence into your system, or you might be content just drinking your fave beverage all night. Whatever the reason for your alcoholic craving, playing a cheeky drinking game is definitely the most entertaining way to get intoxicated if you’re an adult lady who loves to drink.

Try one (or five) of these super fun girls night drinking games at your next gathering to really get the party started. And obviously proceed with caution like any good grown-ass woman would…

This is a classic girls night drinking game guaranteed to get you very drunk. Go around the circle and have each player tell two stories about themselves – one which is true, and one which is a lie. The next player then has to guess which is the true story. If they get it wrong, they drink, and if they guess correctly, the storyteller has to drink. The game then continues around the circle until everyone is bored, or really buzzed. 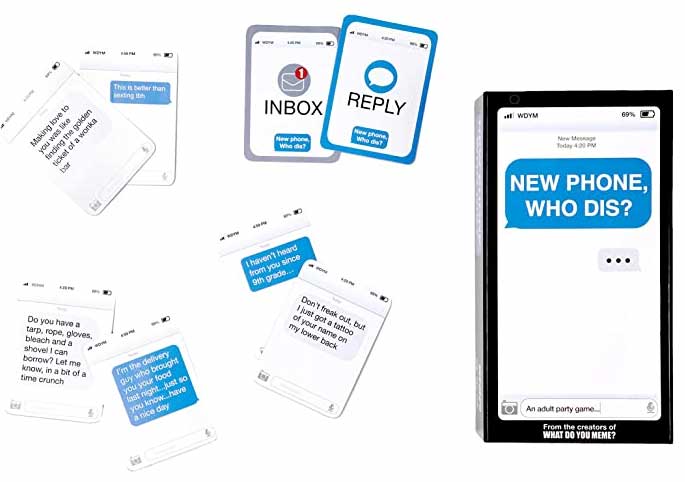 Think, Cards of Humanity meets the funniest text message conversation you’ve ever had. From the creators of What Do You Meme (another hilarious drinking game), in this game, players rotate drawing a sent message card while the rest of the group competes to play the funniest reply card. Once everyone in the group has played their chosen reply card, the judge decides which combo is the funniest. That person gets a point. The person with the most cards at the end wins.

Have everyone sit in a circle around a large jug or a cup. Pass a coin around the circle and take turns flipping it. Before flipping the coin, the person whose turn it is must pour a portion of their drink into the jug – the amount should be determined based on how confident they’re feeling. They then flip the coin, calling it in the air. If they guess wrong, they chug what is in the jug before passing the coin. If they guess correctly, the coin is passed on to the next person who adds their drink to the jug concoction, who then tests their confidence. 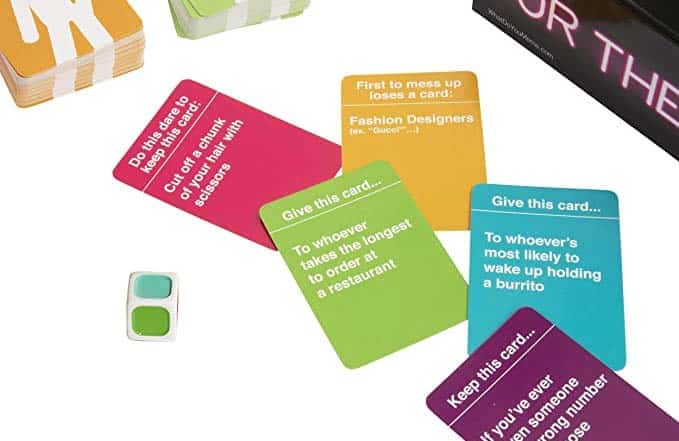 Shop: For The Girls

This is the perfect drinking game for bachelorette parties. Whoever has most Instagram followers goes first, rolling the die. Whichever side of the die lands face-up, take the top card from the corresponding color deck. Read it aloud to the group & perform whatever action is on the card. Some cards involve just that player, some require the whole group. The player to their left then rolls the die & the game continues like this. Every winning card gets you a point. 1 Card = 1 Point. The player with the most cards at the end wins!

Players all sit in a circle and someone asks a ‘most likely’ question; something like “Who is most likely to pass out in the bathroom at a club?” or, “Who is most likely to get arrested for stalking Channing Tatum?”. On the count of three, everyone points at who they think would be the most likely to do whatever was mentioned. You take a drink for however many people are pointing at you, so if five people think you’ll be passing out in the bathroom of the nightclub later, you take five drinks. It’s almost like a self-fulfilling prophecy… 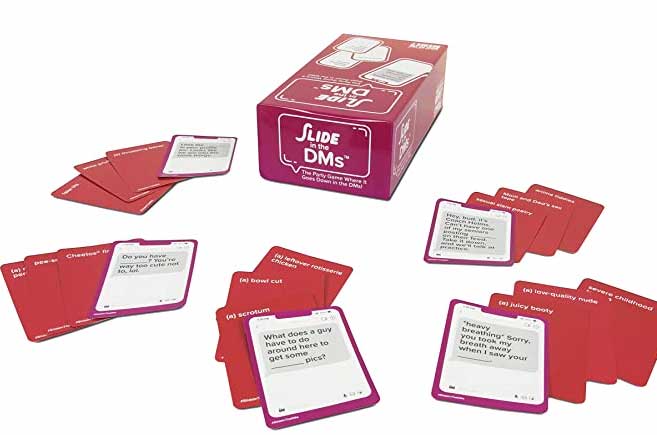 Shop: Slide in the DMs

Another awesome girls drinking game from the people at What Do You Meme. In this game, players take turns at being the judge, while everyone else slides into the judge’s DMs with a response card. Players rotate drawing a DM card while the rest of the group competes to play the funniest Play card. Once everyone has played their chosen Play card to submit face down, the rotating judge awards a point to the funniest one.

Before your guests arrive, brainstorm a phrase for each one that they will then need to slip into casual conversation throughout the night – without anyone noticing. The phrases can be anything, like “I just started at a new gym”, “I hate chocolate, or “It’s going to be a big night”.

If you use your phrase and five minutes go past without anyone noticing, everyone has to drink. But if you get called out for using your phrase, you have to drink.

Everyone sits in a circle and one person whispers a “who” question based on someone in the group, into the ear of the person to their right. This question might be something like “Who here do you think has had the most sex?”. The person then has to answer the question out loud. The catch: no one else knows what the original question was. If the person whose name was said wants to find out what the question about them was, they have to take a drink. If they chose not to drink, then everyone else in the circle gets to hear the question (via whispering), and that person never gets to know. Fair warning: even if you think you aren’t paranoid, this game will make you feel it. 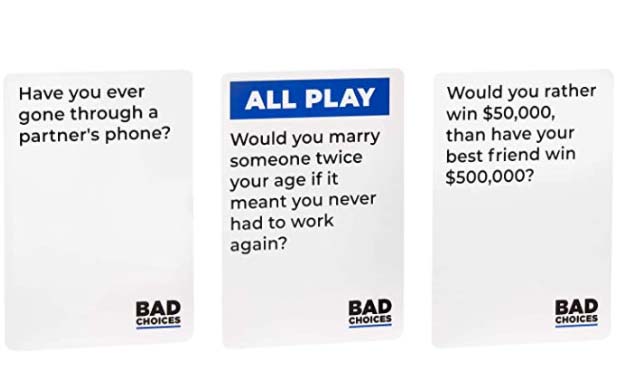 This hilarious drinking game is a combination of Uno and Never Have I Ever. Each player is dealt 6 cards. When it’s your turn, choose one of your question cards, then ask it to the player you think is most likely to answer ‘YES’ to it. If they say ‘YES’, you get to discard your card (and they have to drink). If they say ‘NO’ you have to keep the card (and you have to drink). Answers can ONLY be ‘YES’ or ‘NO’ and each player must answer honestly. The player to discard all of their cards first is the winner.

Players sit around a circular table covered in filled shot glasses – or jello shots –  and everyone puts their head down on the table. On the count of three, everyone looks up at stares at another player. If you find yourself staring at someone who isn’t looking back at you, you’re safe! But if you look up and are staring directly into someone’s eyes, you shout “Medusa!” and take a shot. The game continues until the tabletop of shots is gone. 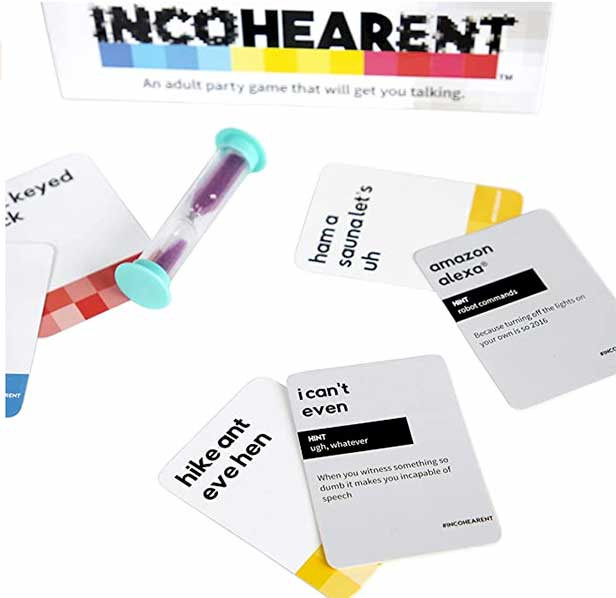 The more you drink, the harder this drinking game gets! A rotating judge flips the timer and holds a card up so that only they can see the answer, but everyone else sees the Incohearent phrase. Everyone else reads the front of the card aloud. Whoever decodes the phrase first wins the card (and the judge must drink!). When the card has been decoded or the translators have elected to pass, the judge pulls the next card. Once the timer runs out or 3 cards have been decoded, the round is over, and the next person becomes the judge.

Each player has two cups – one that is full of alcohol and one which is completely empty – and a spoon. They then have one minute to transfer as much of their drink from one cup to the other using only the spoon, and when the minute is up, they have to drink whatever is left in the original cup. This game is much harder than it sounds, and the drunker you get, the harder it gets.

Straight face is all about ridiculous and inappropriate sentences – basically, any sentence that would be impossible to say or hear without cracking a smile. Everyone writes these sentences on small pieces of paper, and one at a time, players chose a slip of paper and attempt to read it aloud while keeping a straight face. If they lose their cool, they must drink.

Remember playing Duck, Duck, Goose as a kid? Well, this is that exact game, except with alcohol and shots. Everyone sits in a circle and one person goes around bopping people on the head while instructing them to “sip”. The people who are bopped have to sip their drink. The bopper then chooses someone to say “shot” to, who then has to leap up, chase the bopper around the circle and try to tag them. If they succeed, they become the bopper. If they don’t, they have to do a shot. See, exactly like the playground version… 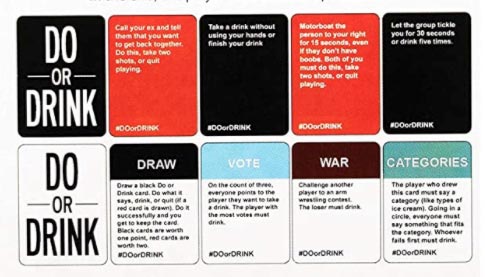 Shop: Do or Drink

This is the “Dare” part of “Truth or Dare” in a handy card drinking game. There are no “free skip” cards in this game – and with dares like “Text a random phone number ‘u up?‘”, doing these dares will completely take your party to a new level, you’ll be talking about it for weeks after it ends.

Everyone puts themselves into equal teams and sits one in front of each other in a line. Once everyone is ready, someone yells “Drink!”, and the race begins. The front person must then start chugging their drink. Once it is completely finished, the second player can then start to drink. The race continues until everyone on the team has finished their drinks, and the first team to finish all their drinks wins.

This girls drinking game is for people who can commit. Players take a sip or shot of beer every minute, for 100 minutes. It is best to have someone keeping an eye on the clock, and even then, you’re bound to miss a couple of shots here and there. People who go the entire 100 minutes are now members of The Century Club. And likely members of the Terrible Hangover club as well (unless they try one of these tips for avoiding hugging the toilet bowl the next day).

20. These Cards Will Get You Drunk 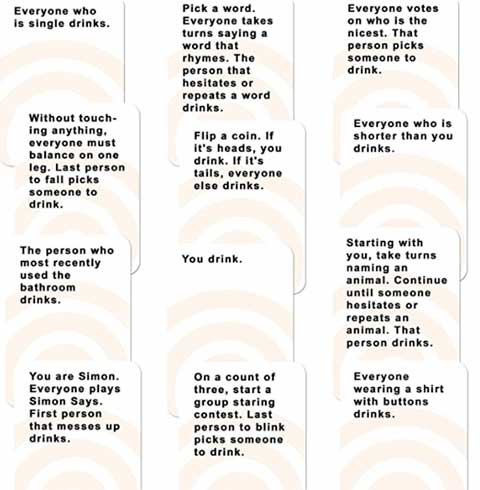 Shop: These Cards Will Get You Drunk

The name says it all: This girls night drinking game will get you drunk. Compete, vote and screw your friends over with 100 dynamic cards – no two games are the same.

This game is so simple, which is exactly how drinking games should be. Someone thinks of a word that is absolutely prohibited to be said, and if anyone utters that word throughout the night, they have to drink. You can make people get exponentially drunk by designating a common word like “the” or “and”, or a not-so-common word like “extraordinary” if you want to take it easy.

Comment: What is your fave drinking game for girls night?