The whole world is anticipating the birth of a new royal as the Duchess of Cambridge is now only days away from the speculated due date of April 25. The son or daughter of William and Kate will be fourth in line to become king or queen, after Prince Charles, Prince William, and of course little Prince George.

After going through some tough first few weeks of her pregnancy due to severe morning sickness, Kate has been glowing and looking stunning as ever. We love to see her at public appearances and for some reason, are fascinated by her style. Clothes that Kate has worn in the past have been sell-outs within hours, that’s how much of a style inspiration the Duchess has become to women everywhere. So, let’s take a look at Kate’s maternity style over the past 9 months: 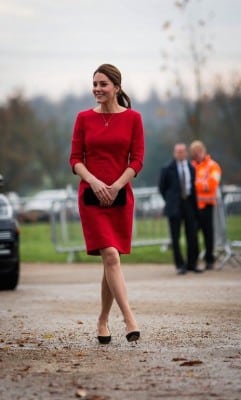 Even though there was no baby bump in sight in this outfit, Kate was glowing in this red dress – like only a pregnant woman can – during an appearance in late November last year. The fine jewellery and casual up-do give this outfit a modern twist. 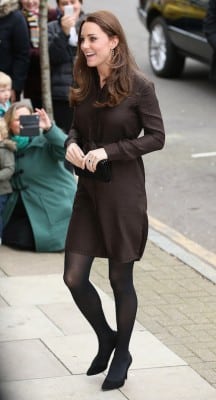 In January, Kate proved that she can rock head-to-toe brown while visiting the Fostering Network in London. 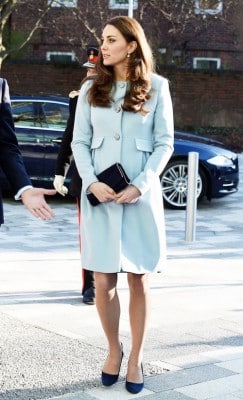 This baby-blue coat Kate wore a few days later sent journalists into a frenzy, who saw it as a sign that she is pregnant with a boy – even though Kate and William had said that they chose not to know the sex of the baby. 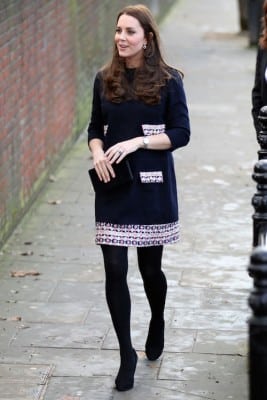 At 7 months pregnant, Kate still managed not to show too much of a bump in this short navy dress. The length probably would have been inappropriate without the black tights, but with those legs, we can’t blame the Duchess! 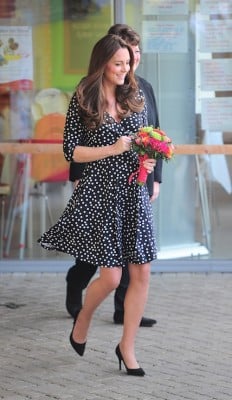 Looking oh-so-pretty in a black and white dress in March, Kate reminded us of the timelessness of polka dot dresses. The Duchess also opted for the same print when she stepped out of St. Mary’s hospital after giving birth to Prince George. 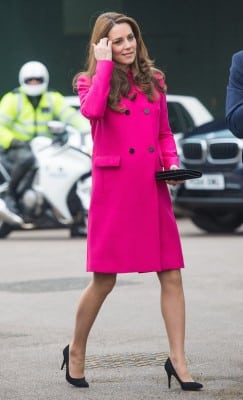 Pretty in Pink! For her last public appearance before going on maternity leave, Kate chose this bold, hot pink coat by Mulberry. A sign that it might be a girl after all?!

Images via Zimbio, Popsugar, In Style