When Elle Australia recently debuted their June cover on Instagram featuring model Nicole Trunfio breastfeeding her son, the reaction was “overwhelmingly positive.” However, the magazine has since come under fire after choosing to only include the cover in a subscribers email and run with a safer version for newsstands.

Hitting the streets this morning, the new magazine cover sees the 29-year-old mother fully clothed and holding her sleeping son, Zion. Initially, what was a powerful message that according to the magazine’s editor “enabled us to contribute to a necessary conversation around normalising breastfeeding,” is now being overshadowed by a creative decision or as the publication argues a “beautiful bonus.” 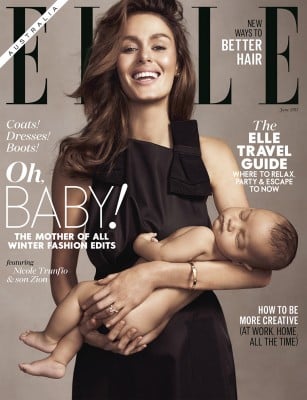 In an article published on Elle.com.au, editor Justine Cullen wrote: “Yes, it was a commercial decision to run it on subscriber issues only. Magazines are a fantastic platform for being able to bring issues to light and take a stand, but ultimately, this is still a business. It’s still my job to sell magazines.

“A cover is how we do that, and for that reason, as the editor, every month you try to put forward a cover you think will appeal to the widest possible audience.”

Social media has since turned into a soapbox, with many arguing that Elle has in fact sent a negative message about breastfeeding in public by making it only available to a select few, those who are predominantly women. Cullen defends her decision, however, and pointed out in the post that it could spell disaster for the magazine if too many people complained.

“In an ideal world no one would have an issue with seeing breastfeeding on the cover of a magazine. But it’s not an ideal world,” she said. “Supermarkets are where we make a large proportion of our sales. Not everyone walking through a supermarket is our target demographic, nor are they all going to be understanding of the message behind this cover.

“If enough of those people complained about this cover and it was pulled from the shelves – or worse, if we were made to put a sticker over the part of the cover deemed offensive – it would spell disaster.”

Even if the issue was to be pulled from newsstands, one has to ask: would that have actually been so bad considering the amount of backlash the magazine is now getting?

On Thursday Trunfio took to Facebook to clarify her intentions with the breastfeeding cover image and asked that people “take this for what it is” and “let us normalise breastfeeding.” She then went on to say: “I’m so proud of this cover and what it’s stands for… Thank you to ELLE for being so bold and making such an encouraging, positive and healthy statement.”

So, in another bold move, has Elle Australia in fact made an unhealthy and discouraging statement by refusing to run the image on public stands? Cullen disagrees: “The idea of getting lambasted for doing something good but not doing it enough makes no sense to me…

“If we’re not willing to throw our entire business behind a message, does that mean we shouldn’t make the statement at all? That seems extreme and redundant.”

What do you think? Tell us in the comments below.