An emerging Brisbane artist who’s set the art world abuzz is now hoping to convince controversial businessman-turned-politician Clive Palmer to sit for him for the prestigious Archibald Prize 2015.

Kristian Williams, 29, received widespread acclaim following his debut solo exhibition Bold & Unbridled at Brisbane’s Mercure Hotel last March. There, his art captured the eye of the gallery director of Fortitude Valley’s celebrated REDSEA Gallery Brisbane which represents artists and sculptors from across Australia, New Zealand and South-East Asia. Now, REDSEA is hanging some of Kristian’s works and will proudly host his second exhibition, featuring 12 pieces, from July 22 until August 9.

And Kristian is definitely going places, says REDSEA Gallery Director, Lee Steer. “I think Kristian Williams’ work embodies an energy that is synonymous with all our artists at REDSEA Gallery,” Mr Steer says. “His unbridled use of colours and textures exhibit a strong neo-impressionist vibe, almost as if it belongs in an Avant-Guard New York art-house.

“Kristian is incredibly motivated towards devolving his artistic career, and that motivation, coupled with his unique talent, will prove to continue to propel his artwork into the psyche of the Australian art market.”

As for the Brisbane-born-and-bred artist, he says he was pleasantly surprised – and hugely relieved by the sell-out success of his debut exhibition. An impressive 30 works in his signature, strongly-coloured, neo-expressionistic style were snapped up quickly on the night and soon afterwards by both local and interstate art collectors.

“The fact that my first exhibition was a sell-out was great,” Kristian says. “It was really, really exciting. It was also really nerve-wracking! I was nearly sh**ing myself; I couldn’t hide in the corner that night because there was such hype leading up to it and then we had 170 people turn up on opening night and in that space, it was just a moshpit!

“I felt a bit like a celebrity; the Mercure did a beautiful job. There was heaps of social media that night and a lot of people were hashtagging my name. One guy put up one photo of my artworks, one of his followers in Sydney then found my Instagram and then contacted me directly and I ended up selling three pieces of art to this guy who wasn’t even at the exhibition!” 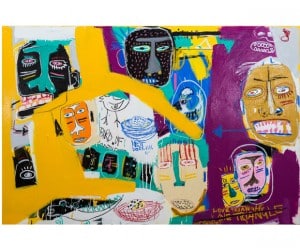 However, Kristian’s talent is no accident; painting is in his blood, with his artist and landscape designer parents and artist grandfather fostering his natural abilities before he could reach an easel. Following his Queensland Government Minister’s Award for Excellence in Art (2003), Kristian completed an undergraduate degree in creative industries majoring in visual art in 2009 and then pursued his Masters of Creative Advertising. After success in both creative industries and high-end fashion, last year he took that leap of faith, deciding to concentrate full time on his true passion: painting.

So, how did he get his big break? “I’ve always painted, but it was always on my days off,” Kristian says. “It’s strange how it all started: I managed Ralph Lauren for eight years [in Brisbane city]; left there, got into advertising, where I hated my job and basically what happened was that I had a commission I was doing for a friend of mine and I put it up on Facebook and an old client from Ralph, who is the director of sales and marketing at the Mercure Hotel, phoned me and said: ‘We’ve got this huge gallery space, would you be interested in putting some of your art up there?’

“It’s gone gangbusters, which is really great, but of course there are quiet moments when you think, like in any business, ‘When is the phone going to ring?’”

Kristian regularly references mythological, cultural and surrealist themes – often waking up from a dream and painting what his mind just experienced. And while at one end of the spectrum, his use of bold colours and violent, emotive lines create stand-out statement pieces, he also creates gentler works which explore the quirkiness of the human soul.

“A lot of my inspiration for art comes from dreams; I’m at my happiest when I’m painting and creating, for sure,” Kristian says. “I’m also very inspired by the neo-expressionism movement, so that’s a huge thing for me. That particular style has always got me going; there are a lot of crazy, bold colours and thick slabs of colour, which certainly makes my work stand out.

“One of the biggest things about my art is that sometimes people think I’m a bit angry! I’ve had comments from people before where they go: ‘Oh geez, what’s going on in his head?’ And I’m not at all and that’s one of the most common misconceptions. I mean, it doesn’t happen all the time, most people really love my art – the colourful aspect of my art makes the viewer know that all is not lost; the colour is indicative of happiness and a good feel.” 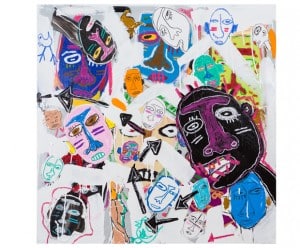 The artist’s ultimate dream is to stage up to three exhibitions annually and showcase his art on an international scale – possibly with a little help from none other than Mr Clive Palmer, the divisive leader of the Palmer United Party, whose media team is yet to answer the artist’s request to paint him for the Archibald Prize 2015. But with time running out – Archibald entries must be completed by June 26 – the artist is hopeful of locking it down soon.

“I like the fact that Clive is a very controversial figure and when you’re painting someone for such an amazing show as the Archibald, you really have to choose someone who has a strong character attached to them. He’s very outlandish and easily recognisable and I think if I was to paint him, I could execute it quite well,” he says.

“The Archibald is quite true-to-life, but obviously I would like to incorporate into the portrait something essentially true to my style as well, so you know, if I put an Indian headdress on him – something with a bit of flair that’s quite out there.

“Clive’s wife [Anna] used to be one of my top clients as Ralph Lauren so we’ll see how it goes. It’s kind of exciting. I’m really, really hopeful of getting Clive Palmer for the Archibald.”

As well as a return to portraiture, which he hasn’t done for some time, Kristian is also dabbling in textiles at the moment – painting shirts, jeans and a jacket for Brisbane fashion and PR identities. “I’ve had a lot of great feedback on the garments I’ve painted, so I’d like to do some designs on fabric and have them sent overseas and have them all printed on silk and embellished with jewels,” he enthuses.

“Ralph Lauren is a huge fashion inspiration – I love the lifestyle attached to the brand – but in terms of outlandish design, the head designer for Burberry, Christopher Bailey has done amazing things for the brand. But when it comes to a muse, I’d have to say the late African-American artist, musician and producer Jean-Michel Basquiat; his painterly ability and his sense of colour coding and aesthetic are a true inspiration to me. Closer to home, my mum is an inspiration and has always been there to guide me on my creative journey.”

So, what are his ideal creative conditions to work in, at home? “I paint four to five days a week in my open-air studio courtyard, night-time is my switch-off time. I just get out there in the sunshine, put on some great jazz music, get my coffee out and just go for it,” he says.

“I just know I have to do it. And you can have off days, but you have to just keep on pushing through. And I think that’s what makes a good artist, someone who keeps going and going; you can’t leave until it’s done and you come up with a solution.”