Now people do differ. Some may have a fetish about where they prefer to be touched, stroked, caressed,  kissed, licked, bitten or sucked (have I left anything out?). Plus there are some places which are a turn off. Knowing your lover is important, however there are areas of each body, both male and female, which are a good place to start.

Now there two types of erogenous zones and they depend largely on skin type. Non-specific zones have been identified in areas such as the sides and back of the neck, the armpit and along the sides of the chest. Sensation in these areas can often feel like a tickle but it can be quite enjoyable.

Specific zones on the other hand have skin with nerve endings closer to the surface. They can be found in regions of the body around orifices. This includes the nostrils, lips, mouth, eyelids, ears, genital area and anus. The nipples are also associated. These areas are connected to our brains inner reward system. This is why they are exceptionally sensitive when touched and often provide a sexual response.

Many people love having fingers run through their hair or their scalp massaged. As the nerve endings are so close to the brain it provides a sense of relaxation and enjoyment. Whether or not it is a sexual response depends highly on the individual and the circumstances.

Many things can stimulate the ears. This includes whispering, breathing,  licking, biting, caressing or kissing. The area behind the earlobe is said to be the most effective. However personal preference always comes into play.

Some people like the feeling of having their eye-ball licked or eyelid kissed. Remember the skin around an orifice is more sensitive? The thought puts many people off. For those who have tried it, a number report it’s sensational.

The neck and throat regions are also popular hot spots for men and women. The collar bone, back and sides of the neck are all popular places to lick, kiss, bite and caress. Sometimes heavy breathing will do the trick!

The areola and nipple are popular regions for both sexes. They can be stroked, caressed, rubbed, licked, kissed or bitten. Both sexes respond well to either firm or light touch of the breast region, including the sides of the breast. The type of touch can often change the sensation and the response.

Now this area is really interesting. Madonna told reporters back in 1985 that when a finger entered her navel (belly button) she distinctly felt a nerve sweep through her entire body. Others have had a similar experience and some have reported a direct link to their genitals. Who would have though a  belly button could be such a hot spot?

Located directly above the anus lies another erogenous zone. People claim they really enjoy the sensation of being touched, licked or kissed.

The bottom and anus

Women too experience sexual sensation in the rectum. Once again however this region is highly dependent upon personal preference. 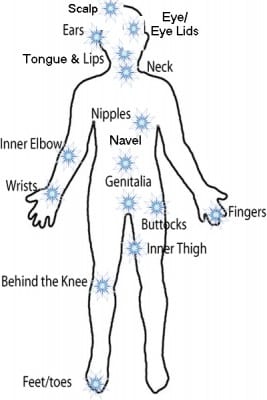 The prostate gland can be stimulated from the outside, rather than via the rectum, by applying pressure to the base of the perineum near the anus.

When very lightly touched, caressed, licked or kissed the fingers and hands may provide a sexual response. Very firm holding of hands can do it too. The sensation depends greatly on the type of touch experienced and the specific area.

Fingertips are considered the second-most sensitive parts of the body. This is possibly why finger sucking is popular.

The inner thigh is the most sensitive part of this region as well as light touch on the back of the legs and knees for some people. Once again light or firm sensations work best.

This part of the body is greatly dependent on the individual. Some people are very ticklish or don’t like the visual and thought of feet. They certainly wouldn’t consider this region a turn on at all.

It’s worth noting that the amount of nerve ends in the feet have a strong connection with the brain.  For those who don’t mind feet and toes, they enjoy the sensation of a nice firm foot rub or their toes being sucked and licked. For some the sensation is similar to genital stimulation.