I was a willing vacay guinea pig. Here’s what I discovered…

Flying over mountainous terrain, it was easy to mistake the lush destination hovering below me for Italy or Ireland. Brightly hued rooftops of a community of shacks and lush greenery emitted European vibes.

But I wasn’t about to land in any of the aforementioned destinations. I was edging in ever so closely to the main island of South Pacific archipelago Fiji, where I’d be test-driving the best the island has to offer.

On closer inspection, on the drive from the airport to the resort, I got the feeling Fiji might not be as luxe as I’d envisioned when I snapped up the chance to fly here, but what I actually learnt is that it’s a stunningly untouched destination where the locals live simply – a way of life we’d all do good to adopt. 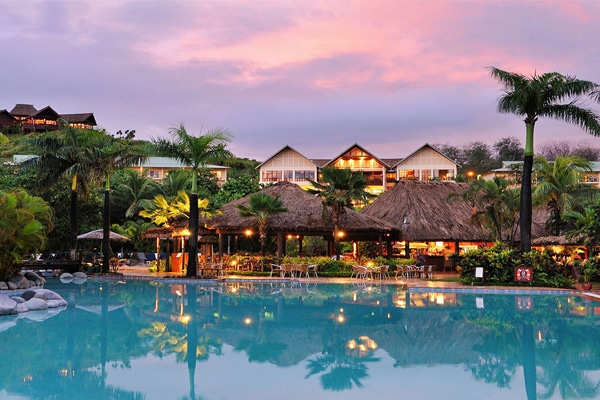 One of Fiji’s most popular cities for tourists is Suva – but I wasn’t in the mood for that party-heavy kind of trip. Instead, I wanted to clear my head of all of life’s stresses, so the Coral Coast was the place that won me over.

I’d heard great things about Outrigger Beach Resort Fiji – not just because of the friendly staff who greet everybody with “Bula” (meaning ‘life’), but also due to their incredible contributions to nearby villages (rebuilding a local school’s assembly hall and kindergarten; delivering a new maternity ward at Sigatoka District Hospital). And if that wasn’t soul-fulfilling enough, guests are also given the opportunity to physically work on whatever charitable project is on the agenda for a few hours of their stay.

Another bonus was booking a beachfront bure and being spoilt by a personal butler (included in the fare) for the duration of my stay.

When it comes to Fiji, resort life is the best life – but allowing yourself to be taken in by the community spirit that radiates so beautifully through the country will leave you with memories to last a lifetime. 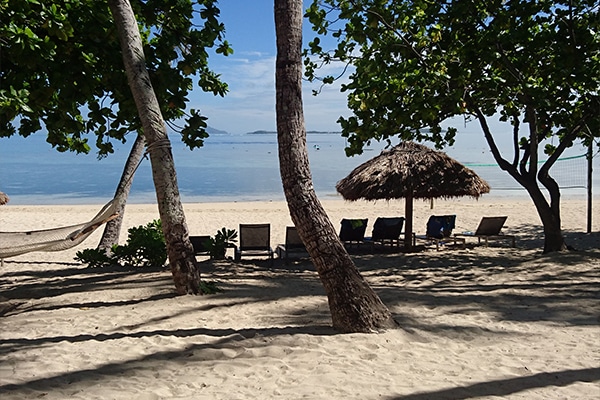 Fijians are refreshingly content, grateful people, who relish simple pleasures like praying, even if it’s in a makeshift chapel. I actually sat in on a service ­– an activity Outrigger offers its guests – in one of the island’s rustic religious structures. When Cyclone Evan destroyed their place of worship in 2012, the people of Malevu village got together to create the temporary space until they could pull enough money together to build a new one.

There I was, huge DSLR in hand, a Kardashian Kollection shoulder bag I was cursing earlier that morning for not being big enough to fit my brush, lipstick, iPad and phone…and all around me were locals from the village, sitting inside five bits of poorly constructed corrugated iron, singing Fijian hymns to their heart’s content. It really made me reconsider the way I’ve been approaching day-to-day life.

I know, for many of us, going to church while we’re holidaying isn’t at the top of the list, but this was different. I couldn’t understand what was being said, but that allowed me to feel the love, respect and gratitude that was being projected into the room. It was a truly heartwarming experience. 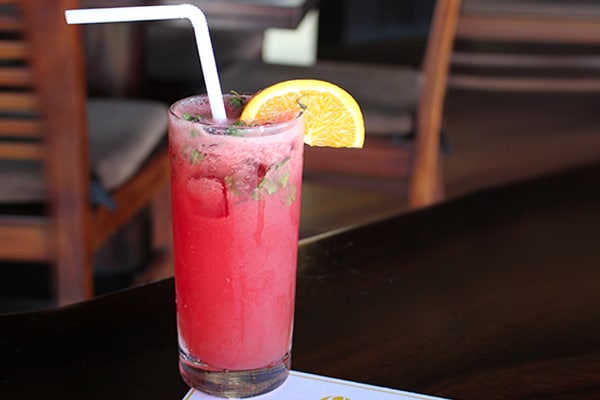 As I was laying in the hammock outside my spacious bure, reading up on all the activities on offer, as well as where I could go for a drink, it hit me: Vahavu – the resort’s famed adults-only pool area, complete with a swim-up bar, was the perfect place to get my island vacay vibes on. I made a beeline there and admired the magical decorations being hung for a wedding later that night while I guzzled three strawberry daiquiris (always my first choice).

It was dawning on 4pm and my sunscreen was starting to be tested, so I rounded up my towel, Havaianas and book (ha – that was wishful!) to leave, but my gorgeous bartender wasn’t going to let me head off without letting me know the Outrigger has two happy hours – Every. Single. Day. One from 4-5pm at poolside Baravi Restaurant, and another at 9-10pm at nightclub-style Vakavanua Lounge. #winning

I’d already made plans for that night, though: to watch the sunset from hilltop Kalokalo Bar, and enjoy a tapas-style dinner while doing so. While I was waiting for my golf buggy to take me there, I booked in for a treatment at Bebe Spa. Actually, I booked two for the next morning. How could I resist? 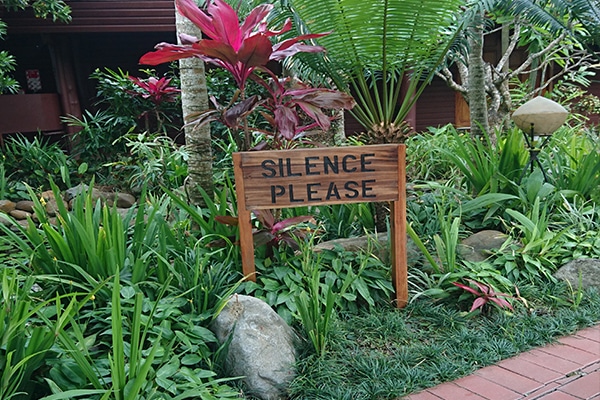 Bebe Spa – where freedom-signifying butterflies adorn ornate wooden doors – is quite simply, heaven on earth. As instructed, I changed into a fresh robe, donned slippers and sat down for a herbal tea. What a beautiful way to start the day.

I spent two hours being pampered inside the Mai-Nawa room, which, coincidentally, means ‘to float’ – and that’s exactly what I did for hours after a Tropical Escape body wrap and Drua Massage, which involves not one but two massage therapists giving a glorious rub-down. 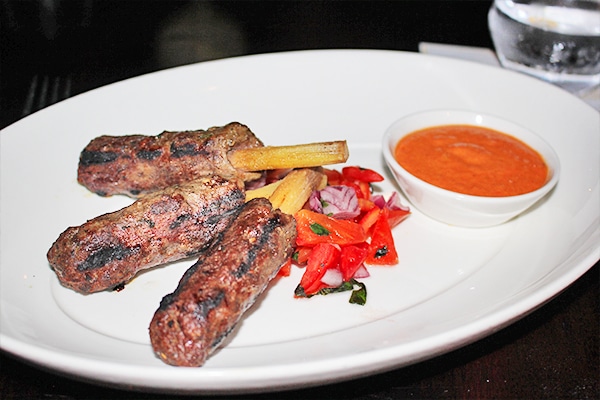 Sundowner Bar & Grill, located right on the beach, will remain in my heart as one of the best restaurants on the island. Breakfast is a serene adults-only affair, which is just what some of us need after a big night; sipping a freshly squeezed watermelon and mint juice while listening to the tide ebbing and flowing is the best hangover medicine. The dinner menu became a tad problematic, as it was tough to choose just one dish (yep, they’re all that good), but it was a blessing for my celiac eyes to see so many clearly indicated gluten-free dishes.

For special occasions – or, if you’re like me, just treating yourself to a romantic night out – the atmosphere at Ivi Restaurant is simply divine. The waiters here are put through two weeks of training at the Australian Butler school, learning skills such as flambéing an orange for chocolate crepe suzette, which is demonstrated right before guests’ eyes. Talk about dinner and a show! 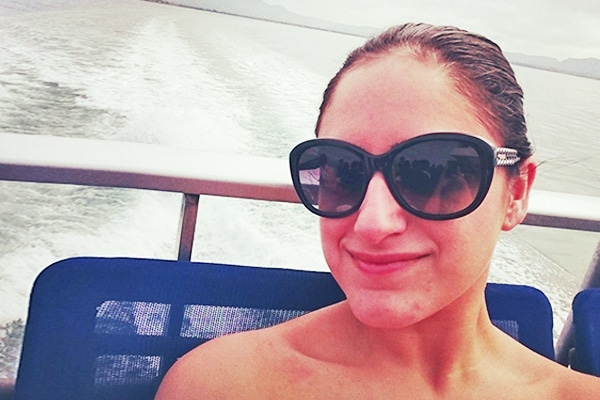 You haven’t seen stunning until you’ve been to one of the smaller island groups in the archipelago. The Yasawas are often spoken about, but way too expensive, in my opinion. The Mamanucas often come in second – but now that I’ve experienced them, I’ve got to assume that’s not by much.

I was almost not going to do it – I’ve been seasick on every boat trip I’ve ever been on, and the only affordable way to do an island daytrip is by water – but after mustering up the courage, I popped some Dramamine, hopped aboard the South Sea Cruises catamaran and cruised to Castaway Island.

A couple of super cute Fijian gents helped me off the boat and into the shallow water, and after the short trek across the beach to the bar, I was pleased to find a chilled champagne cocktail already waiting for me.

I felt a bit bad asking instead for a bottle of water – I didn’t want the alcohol and Dramamine to mess with my stomach, especially since I was about to hop on a speedboat to Modriki Island, where Castaway was filmed. En route, I spotted a pod of about 25 dolphins flipping about in the deep blue, and also saw the island where the upcoming Survivor: Millennials vs. Gen X was recently filmed. Then, once I stumbled onto the sand à la Tom Hanks, I stripped down almost immediately and went for a snorkel off the coast. Bright fish and coral smiled up at me from below, and I smiled back.

Some people visit Castaway Island for the day – only 20 daytrippers are allowed their each day, so as not to clutter the island – but I booked another beachfront bure, and boy, was I glad I did.

Once I returned from Modriki, I showered and headed straight for Sundowner Bar, where I toasted myself to a great trip over crisp pizza in front of yet another gorgeous Fijian sunset.

Comment: Have you visited Fiji? What was your fave thing to eat, do or see there?