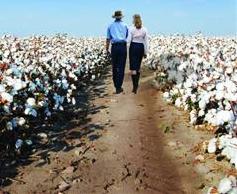 “Love in the Age of Drought” by Fiona Higgins

When Fiona Collins meets Stuart Higgins at a conference in Melbourne, she isn’t looking for a relationship, let alone the upheaval of falling for an eco-aware cotton farmer from South-East Queensland. But then life never goes quite according to plan.

When Stuart sends Fiona a pair of crusty old boots and a declaration of his feelings just sixteen days into their relationship, it’s the start of a love story that endures – in spite of distance, the strain of Stuart’s farm entering its fourth year of drought, and Fiona’s own issues with commitment.

Something’s got to give and eventually Fiona puts everything on the line – her career, her Sydney life, her future – and moves to Stuart’s farm. Nearest township? Jandowae, population 750.

Here, Fiona encounters an Australia she’s never really known, replete with snakes on the doorstep, frogs in the toilet, and the perils of the bush telegraph. Gradually she begins to fall in love with rural life, but as Stuart struggles to balance commercial and environmental realities, she realises that farming isn’t quite as simple as she’d imagined. Ultimately, Fiona has to learn how to cope with the devastating impact of the drought that grips the countryside, and what it means for Stuart, the farm, and their future together.

Fiona Higgins has a background in Indonesian translation, corporate communications and non-profit management. She currently works as a philanthropy executive, advising individuals and agencies on social investment opportunities in Australia and Asia. Fiona is married to Stuart, and they have a two-year-old son, Oliver. Love in the Age of Drought is Fiona’s first book.

Shesaid Says: This is a well written first novel with some thought-provoking points of view. Would you really give up your career, friends and generally cushy life in the big city to become a cotton farmer’s wife in South-East Queensland? Fiona articulates the culture shock very well without patronising the rural community of Queensland. She learns to love the country and it is easy to see why she and Stuart have such a strong bond as they navigate their way through long distance dating, living together then married life and parents. A lovely romantic story from real life Australia.

Tell us, have you ever done anything like this for love?