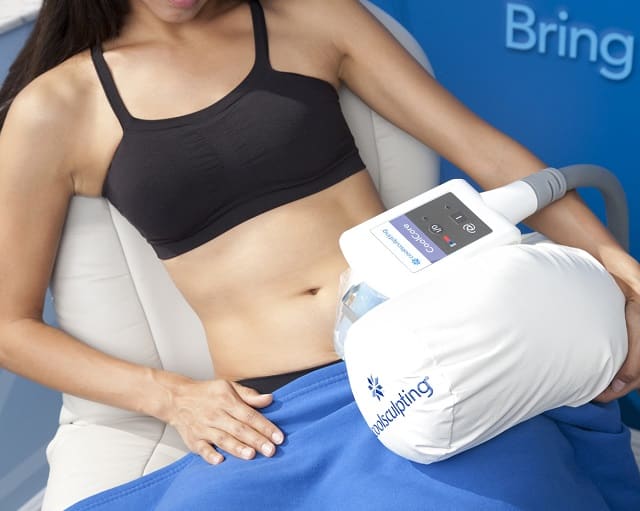 Why We Need To Say The Words “I Love You”

If I were to ask women about one thing that they would like to change about their bodies, getting rid of some stubborn fat bulges would undoubtedly be among the top three answers. Technically this is achievable through the right diet and exercise, but there are certain areas of our bodies that will never be as flat as we want them to be, mostly due to genetics.

Liposuction is an option to reduce fat, but many people don’t want to go to the extreme of having surgery. As impossible as it sounds, there is a new way to permanently eliminate fat without having to go through surgery and it is still relatively unknown in Australia. It’s called CoolSculpting and it could be the answer to your fitting-into-those-skinny-jeans prayers. CoolSculpting simply freezes fat cells in your body without the use of needles or any other skin penetrating device. But more on that later.

I talked to skin aesthetician Emma Stewardson from world-renowned plastic surgery clinic Silkwood Medical to get all my questions about the seemingly magic machine answered.

So Emma, how does CoolSculpting work?

The CoolSculpting machine cools fat cells down to a temperature which basically causes them to die. However, the temperature is not cold enough to damage any surrounding tissue or nerves, that way only the fat cells are destroyed and gradually removed from our bodies.

What happens when you book a CoolSculpting treatment at Silkwood Medical?

You first come in for a consultation where we explain how CoolSculpting works and then we see if you are a suitable candidate for it. We try to find fat pockets that are easy to pinch and then we do a so-called ‘full transformation plan’ which shows you all areas on your body that would be possible to treat. You can then decide which areas you want to focus on.

On the day of the treatment I advise patients to wear comfortable clothes and the first thing we then do is take 360 degree photos of them, followed by marking up the area that we are going to treat. After that, gel pads are applied and the vacuum is turned on, which sucks the fat in. Depending on the area, we choose different applicators that vary in size and shape.

Lastly, we turn on the cooling and make sure our patient feels comfortable and has everything they need for the duration of the treatment, such as refreshments and entertainment. After the cycle is finished, we remove the vacuum and do a 2-minute massage, which enhances the effectiveness of the fat freezing.

Most patients don’t feel any pain, but rather a feeling of pressure, pulling, and mild pinching. This is completely normal as the applicator sucks in the tissue in the targeted area. You will also feel intense cold, but that feeling usually subsides after a few minutes. Overall, it is a comfortable treatment during which you can just lean back and relax. At Silkwood Medical, we will provide you with lots of entertainment such as movies and magazines, or you can work on your laptop or even take a nap if you like.

Does it work on everybody?

In order for CoolSculpting to work on your body, you need to have pinch-able fat pockets. If there is not enough fat, it can’t be sucked into the applicator, but most people have those nasty fat pockets anyway.

When do you see results?

It takes a bit of time for the body to eliminate the dead fat cells. Some people see results after 3 weeks, but the biggest change usually occurs between 8-12 weeks after the treatment.

Are there any side effects or risks?

Prior to the treatment we make sure you are the right candidate and don’t have any health conditions that CoolSculpting could affect. Other than that, your skin might look a bit bruised and swollen at first in the area that was treated and it might feel itchy for a few days, but that’s all. There is no downtime.

Is the fat gone for good?

Yes. Basically, your fat cells can either expand or shrink. With CoolSculpting, you are killing fat cells which are then eliminated. Of course you can still put on weight, but it will be much more evenly instead of just in that one area. So you can maintain a balanced body shape more easily.

CoolSculpting was developed by Harvard University scientists who noticed that some children who were eating popsicles all of a sudden had dimples on their cheeks, which lead them to the revelation that cold temperatures affect fat cells. But don’t just jump into a bath full of ice water, it doesn’t work like that.

Here are some stats: 92 per cent of patients who had just one CoolSculpting treatment noticed a reduction of fat in the treated area and 8 out of 10 patients plan to refer friends or family members. Not bad, not bad.

I have to say, it sounds pretty amazing and the results speak for themselves as you can see in the before and after pictures below. As any cosmetic treatment, it doesn’t come cheap (prices start from $990 for one cycle – still much cheaper than liposuction or a pair of Manolo Blahniks) and is no substitute for a healthy lifestyle, but it is fantastic to have an alternative to surgery.

My Boyfriend Dumped Me Because Of My Breast Implants

14 Itty Bitty Tattoos That Are Too Cute For Words