Period-shaming at its very worst.

A high-end gym has ended up in hot water after banning women on their period from entering their swimming pool.

In a move that has outraged both men and women, Vake Swimming Pool and Fitness Club in Tbilisi, Georgia, posted the following sign in the women’s change rooms: 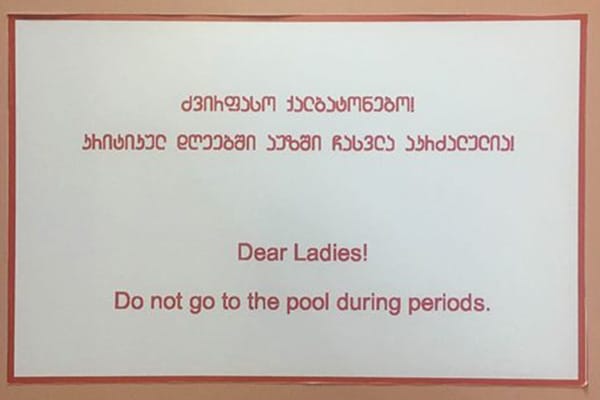 One member took to Facebook to express her anger at the discriminatory sign. “Do you even realize how offensive that is? And, by the way, since according to your rules we are not allowed to use a swimming a pool 5-6 days each month, do we [get] a preferential price compared with men?” she wrote.

The health club was quick to defend their actions, but didn’t answer the pricing query. “Our statement is not sexist and has a preventive objective. We had a case, when the water was contaminated due to which we had suffered damage. We try to follow norms of hygiene and we ask our members to do the same.”

The “norms of hygiene”? Perhaps the club’s decision-makers should have done their research. A simple Google search would have revealed the fact that since menstrual blood is caught in a tampon or menstrual cup before it even leaves the body, it’s not actually unhygienic to anyone if a woman swims while on her period.

Backing this up is tampon brand Tampax, which states the following on its website: “It’s safe to hit the water on your period, as long as you wear a tampon while you’re swimming. Tampons will collect the menstrual fluid before it leaves your body — so you don’t have to worry about signs of your period showing in the water.”

Taking all of this into account – including research that has proven communal swimming pools host a wide variety of bacteria, such as sweat and urine – it seems, by this club’s standards, there are others who should be banned from swimming as well (kids who aren’t toilet-trained, those who don’t feel the need to shower before entering the water…).

Comment: Do you think this decision is justified, or should it be overturned?