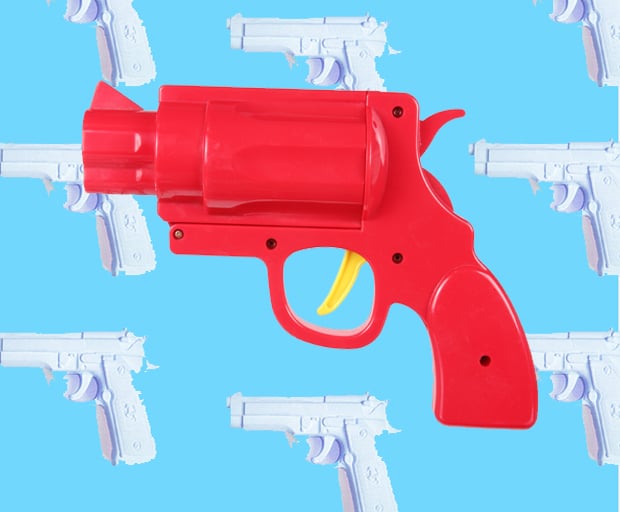 Toys ‘R’ Us have decided to remove 23 play guns from their shelves.

Two weeks ago 130 innocent people lost their lives in Paris. They were killed by terrorists using bombs and guns. As a direct result of this, global retailer Toys ‘R’ Us have decided to remove 23 of their toys resembling guns in their French stores.

What sounds like great news about people finally understanding that toy guns are one of the most unnecesary and unethical ways to entertain children, is actually rooted in a way more practical reason. The company explained that, “this decision was taken in light of the Paris attacks. It was taken because these toys could be misinterpreted as real weapons and could be a source of confusion for police forces.”

Toy guns have been the cause of many police shootings in the past. Earlier this year, a 15 year-old teenager was shot in the back by a police officer in Los Angeles who misinterpreted the boy’s replica toy for a real gun. Last year, a 12 year-old boy was killed by police for the same reason.

Toys ‘R’ Us are clearly trying to prevent incidents like this from happening in France, but hang on a second, does this mean that their decision has nothing to do with a new way of thinking about what toys we should give our children, but is simply a way to make it easier for police to assess a potentially dangerous situation? It is disappointing that Toys ‘R’ Us didn’t take the opportunity to look at the bigger picture and grasp the stupidity and inappropriateness of selling toy guns in a world where people are killed every single day by real weapons.

Isn’t it time to ban toy guns altogether? I find it highly disturbing when a five year-old points a toy gun at you making a ‘pow!’ sound. Why do we teach them what guns do? By giving them the seemingly harmless toy, we are telling them that shooting is a game and it is fun to pretend to kill someone. They may not understand the concept of death yet and their intentions are most likely innocent, but it is much more important to teach our children to be kind to one another than how to shoot.

There simply is no need for children to play Cowboys and Indians, or even worse, play war. It is bad enough that our children grow up in a world full of war and terror and they will soon enough understand all the bad things that are happening, so why are we taking away another piece of their innocence by giving them toy guns?

Here’s an idea, instead of a toy gun, buy your child a toy stethoscope and teach them to play help instead of war. I know I’ll be a proud mother if I can keep my child away from any type of gun for as long as possible.

Comment: Do you think toy guns should be banned altogether?