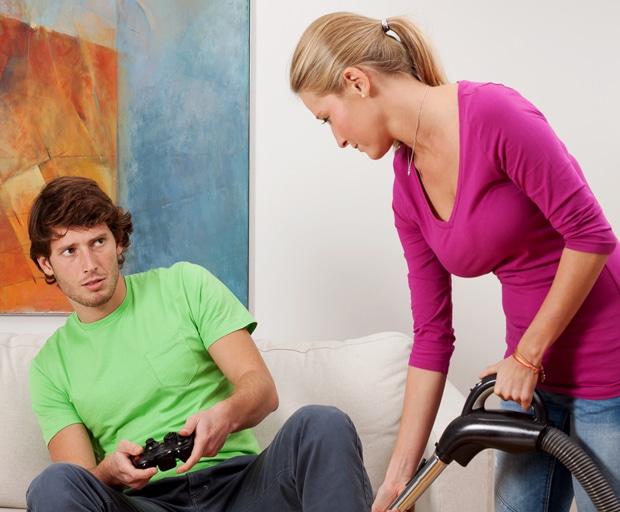 Are you an over-functioning person? The type who can leap tall buildings in a single bound? Do you have a to-do list the size of your arm and appear to effortlessly complete the lot? And finally, are you tired of nagging to get things done only to end up doing it all yourself?

RELATED Why Women In Their 40s Are Choosing To Be Single

If any of this sounds familiar then you need to be aware that you aren’t in an equal partnership. Essentially, you’ve become the ‘parent’ or ‘caretaker’ and your significant other has become the ‘child’. It’s not exactly a turn on and it’s probably not what you want, either. Somewhere along your journey together, however, these are the roles you’ve created.

Unfortunately, many over-functioning individuals try tirelessly to even out this irritating equation. They have conversation after conversation about getting more help around the house and getting their slacker off their butt and into action – and I’d bet good money that things generally pick up for a while but soon slide back to a regular routine. The over-functioning partner will continue their behvaiour and as a result the slacker will ultimately continue theirs. It’s a vicious cycle.

What’s happening is that the over-functioning partner wants the other persons behaviour to change. That’s understandable, but what they don’t realise is that their partner’s behaviour is a response to their own. Regardless of the endless nagging, yelling, screaming, arguing or even threatening to leave, no-one can change what another person does, or in this case doesn’t do.

There is, however, one way things can change to even the equation and it’s easier than many over-functioning people think. There’s no nagging involved, no fighting, no nothing. In fact, all that needs to happen is the over-functioning partner needs to look objectively at what they have done to create their scenario.

For example, were they happy doing everything for their partner when the relationship began? Did they slide into this role as a response to some event? Did they get tired of waiting for their partner to do things and just decided it was easier to do it themselves? Or perhaps they like to have things done their own way and this is why the other person let them take over.

Whatever the situation, at some point these roles became established. Therefore, understanding how things developed into a routine is essential in changing the scenario. Now, this can work with any type of situation where changes need to occur. It’s incredible how people want change but they don’t change their behaviour. They just keep plodding along day after day and the change never happens. It’s often spoken of and argued about, but nothing can occur until there’s some type of behaviour shift.

So in this case where you have one partner over-functioning and the other under-functioning, someone needs to make it happen. If the over-functioning partner seriously wants more equality, they need to change their own actions and behaviours in a way that is more conducive to what they want. This may mean leaving jobs unfinished for the other to do, or creating a roster and only doing what’s on their own list.

In actual fact, this will be more difficult for the over-functioning person. While they have been busy doing everything, they’ve also had total control. They just might discover that control will be revoked and this is where the problem has been all along. However, if they want to get the equal partnership that many desire, then it really is the only way it can happen.