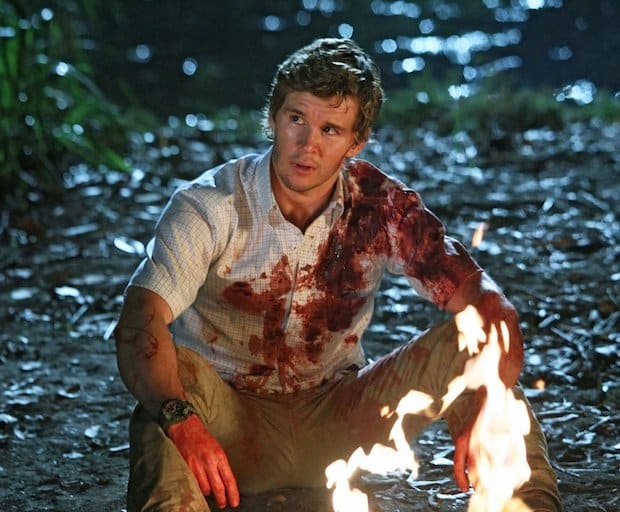 When you’re riding the crimson wave, you have a lot of mixed emotions that are like a washing machine inside you. You’re cranky, feeling fat, feeling yucky, but also feeling like you might want to get down and dirty (really dirty) with your sweetheart, even though, you’re suffering from cramps and a chocolate food baby.

During our periods, we’ve got heaps of hormones rushing through us and our levels of progesterone (the pregnancy hormone) are at their lowest. Progesterone is often said to put a wet cloth on your libido candle, so when it’s low, you’re all fired up, putting you in the position to have some mind blowing sex. Having orgasms during your period can also relieve cramps, back pain and other physical discomfort that may affect you during that time of the month.

Having an orgasm during sex can also make your period shorter. Your period slowly starts to evacuate itself from your body through involuntary contractions of your uterus. When you have an orgasm, your uterus contracts, pushing blood out; so while after you have sex it may seem that your period is heavier, it may be shorter in the long-term and thus give you more time for non-bloody sex.

There’s a stigma around having sex on your period; that it’s gross and unsanitary and that lots of blood is going to run everywhere. While blood pouring out of your vajayjay is unlikely, if you’re worried about getting messy, laying down a towel over those Egyptian cotton sheets or moving to the shower to do the deed are a few great options. One thing you shouldn’t be worried about though is the lubrication – things will be pretty slippery down there, so there will be no lube required. 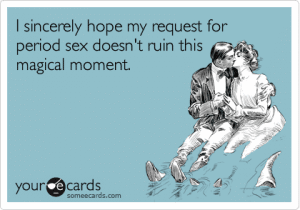 As for the gross part, it’s really time to get over it. Having your period is a natural function of a woman and contrary to popular male opinion, blood does not gush out of our vaginas during menstruation. We’re not sitting on a red river here. On average, a woman loses 30-40 mL during the 3-7 days she has her period. This is less than a quarter of a cup over that whole time. You’re not going to be covered head to toe True Blood style by the time you’re done.

To minimise the mess, a soft menstrual cup or male or female condom can be used. You can still get pregnant on your period, so precautions should always be taken. Another option is to wear a pad and pull your panties to the side so that you can easily slide them back over your lady parts when you’re done. Having sex in the missionary position is also the best option to stop anything from dripping too much, thanks to gravity of course.

While you should never do anything that you feel uncomfortable with, why not take advantage of the sexual enthusiasm that you’re having on your period? You’ll feel great and will satisfy your cravings – and let’s be honest, it’s unlikely that he’ll complain about getting to have sex for the whole month instead of adding in a blowjob/hand-job/no-job week.