“They brought a sharp object that has a lot of teeth and held me…I screamed from pain.”

The town of Raqqa was once a small, civil community in Syria. Since its infiltration by ISIS in 2014, it has become a city of horrors.

Whippings, public beheadings, crucifixions, and the recruitment of child soldiers are all commonplace in the Islamic State’s quest for dominance. However, those who are suffering the most under the brutal grip of the militants are women.

ISIS has instigated the strictest and most misogynistic regime for women in the world. The principles behind it are outlined in a manifesto describing the ‘realities of life and the hallowed existence of women in the Islamic State’. It states girls can be married from the age of nine, and women should only leave the house in outstanding circumstances. They must also remain ‘hidden and veiled’.

Being veiled is no longer a matter of simply wearing a hijab (which reveals the face) and dressing modestly. Women and girls are now forced to wear a niqab, which leaves a slit for the eyes, and then required to drape two veils over the top to hide those as well. They must also wear a loose robe to disguise any kind of body outline. Gloves are compulsory, and every item of clothing, right down to the shoes, must be black.

Twenty-seven year-old medical school graduate Raheb escaped Raqqa, and is now living in Europe. She says the whole city turned to black when the Islamic State took over. Black paint was smeared across doors, the group’s black flag was erected on top of buildings where the fighters live, and of course, the spectral figures of women shrouded head to toe in black now stalked the streets.

“We started to see women in the street wearing black cloaks and covering their faces… Women were whipped because what they were wearing was not right,” says Raheb. 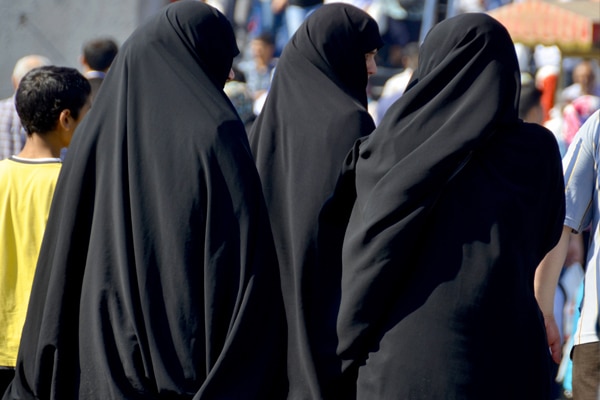 Women are often stoned to death in the streets for the simple crime of not wearing the correct garb. Their dead bodies, along with the corpses of men who are executed for other crimes, are left for days to inspire terror, and keep the people from retaliating.

“That is the policy of the Islamic State; to silence all the people,” says Raheb.

Women are also subject to the total control of male figures within their families. Twenty year-old Sama Maher who still lives in Raqqa revealed, “It is prohibited for a woman in Raqqa or Deir el-Zour to move anywhere outside without a ‘mahram’, a male guardian. It is a big problem as I do not have any, we are only five sisters.”

Enforcing the stringent laws for both men and women are ISIS’s religious police; the Hisbah. They patrol Raqqa, and other cities under the Islamic State regime, to ensure citizens are abiding by Islamic rules. If a member of the Hisbah catches a woman in the street not wearing a veil or gloves, they often detain her in Hisbah headquarters until her mahram arrives. Before she is allowed to leave, her male guardian may be fined, or even whipped.

Possibly most insidious is the all-female branch of the Hisbah; the al-Khansa Brigade. The majority of these women come from Britain and Europe, and only speak a few words of Arabic. However, they have developed such a reputation of notoriety and brutality, they are very much feared by both women and men.

Al-Khansa is charged primarily with policing women, using any, and all means. Last year, a report emerged detailing the torture of a woman in Raqqa who was caught breastfeeding in public. The woman, known only as Batol, told this harrowing tale:

“I was in the market buying a few items when Khansa battalion came and arrested me. They took me to the ‘Hesba’ headquarters in the city, and escorted me to the torture chamber, then they asked me to choose between a whip or a ‘biter’.”

“I did not know what a biter was and I thought it was a reduced sentence. I was afraid of whipping, so I chose the biter. Then they brought a sharp object that has a lot of teeth and held me, placing it on my chest and pressing it strongly. I screamed from pain and was badly injured. They later took me to the hospital. I felt then that my femininity has been destroyed completely…I was not the only one who was tortured with this instrument.”

The al-Khansa Brigade use social media to flaunt their methods. These include savage beatings, lashings, ordering executions, and managing brothels imprisoning the thousands of kidnapped Yazidi women and girls who have been sold into sexual slavery. They are beaten and raped multiple times a day. Some are as young as nine.

The conditions faced by women in Raqqa, Mosul, Deir el-Zour, and other territories controlled by ISIS are beyond horrifying. It is no longer good enough to throw up our hands and say a clear solution is not apparent. For the sake of the women and girls who are suffering terribly, we need to find one, and we need to find it fast.

Comment: Do you think the rest of the world has a responsibility to help the women of Raqqa?