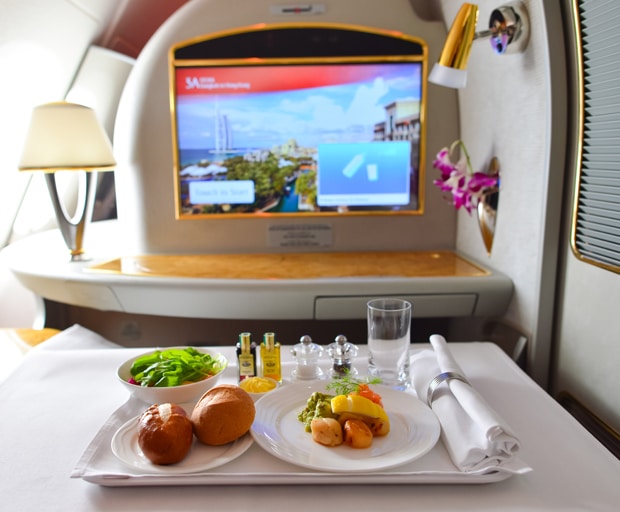 Come take a look behind the velvet curtain…

Traveling is often the highlight of our lives. Jetting all over the globe to new, exciting, exotic and far away places is something everyone wants to experience, hell, some people even make a job out of it.

Unfortunately, surviving long-haul flights can be difficult at the best of times, especially for those of us who have to fly economy and bear witness to the very worst aspects of humanity (which inevitably rear their ugly heads around hour six or seven of a flight), saving the extra cash to spend once we land. The uncomfortable seats, close proximity to strangers, and weird airplane food comedians love to make jokes about are all necessary annoyances we have to deal with.

…Unless you’re one of the elite few who can afford the $21k to splurge on first class ticks, that is. During a recent flight with Emirates from Dubai to New York City, Youtuber Casey Neistat was given a free upgrade from his already swish business class seats to first class. Naturally, Neistat filmed his entire journey to capture all the weird and wonderful perks of flying like an A-lister. Here’s what he discovered… 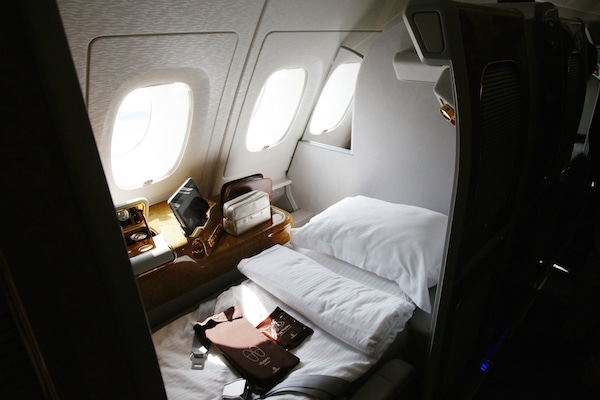 We’re all familiar with the seats in economy – they recline a little bit (read: not at all), and trying to get comfortable enough to have a rested sleep is next to impossible. But if you’re in the first class compartment on an Emirates flight, you can expect your seat to recline aaall of the way, turning into a proper bed with an actual mattress at the touch of a button. And don’t worry, you needn’t tire your posh hands making the bed ready for your slumber, a flight attendant is at the ready to deck it out for you with enough pillows and plush blankets to actually make you forget you’re flying at all. 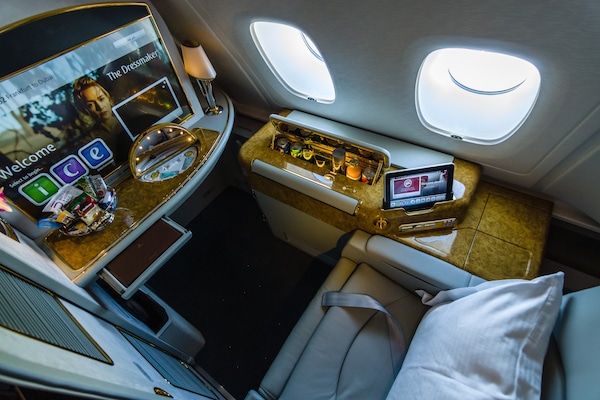 One of the worst things about flying is being so close to so many other people, but in Emirates first class, you have your own sliding privacy doors, turning your seat into your own personal bedroom. No bumping knees or accidentally falling asleep on a strangers shoulder. Sigh… 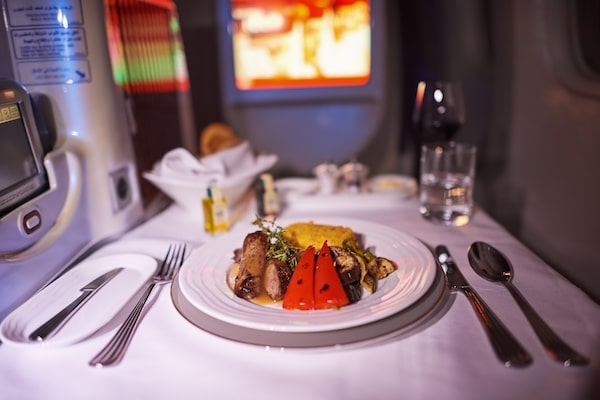 The first class menu on most flights reads like our gourmet bucket lists: expect plenty of decadent options, like caviar, beef consommé and a selection of canapes, which you can access at literally any time you feel a bit peckish. It definitely beats the cold sandwiches and sad snack boxes of economy. 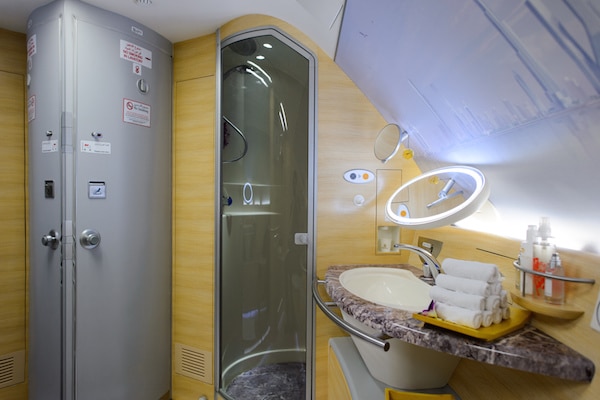 We all know how good the first shower after a long flight is. Washing off the stuffiness of the plane is a fantastic feeling. And if you fly first class, you can avoid the sticky plane feeling altogether – by showering in a huge bathroom complete with a fully functioning ‘shower spa’ that flight attendants book out for your personal, private use. Using the tiny bathroom of economy class has never looked so pleb-like. 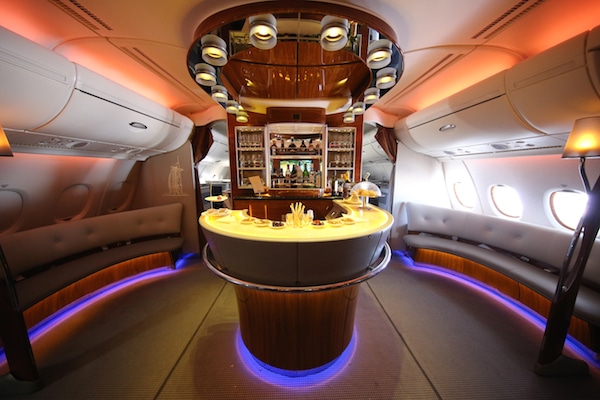 Each mini-suite in first class on Emirates has access to a stand-up cocktail bar exclusively for the use of first class guests – you know, so you can mingle with celebs while flipping your perfectly coiffed hair and tipping back fresh mojitos during your trip… The drinks menu includes an extensive list of decadent whiskeys and wines as well as top-knotch cocktails. 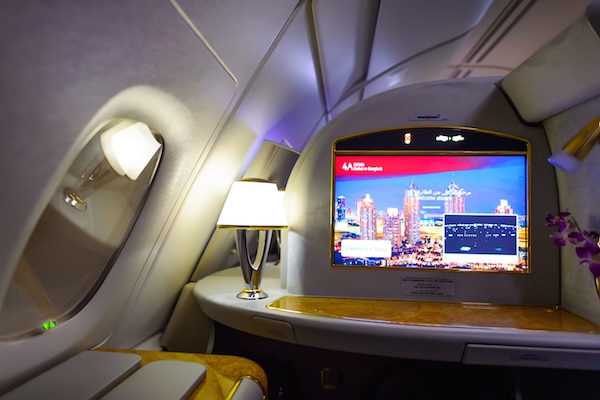 As well as having your own personal cinema screen, with access to literally thousands of movies, TV shows, songs and video games, your first class seat comes with wifi, which means you can tweet, Facebook and blog your luxurious flight away (which, let’s face it, is practically a prerequisite if you’re flying in this much style). There’s also a nifty feature called the ‘onboard camera’, which lets you see the view the pilots are looking at, or – if you’re particularly daring – the ‘downward camera’, which lets you look directly below and through the clouds. It’s just like binge-watching Netflix in bed at home! 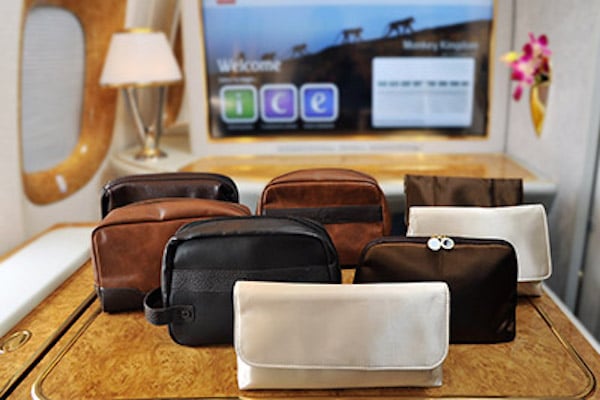 To top off the entire experience, first class flyers get designer amenity kits, which include lotions, creams, pajamas (yes, pajamas), slippers, and everything else you could ever possibly dream of having to pamper yourself into oblivion during your flight. Yep, no need to come prepped with your own travel beauty essentials like all us slobs flying economy.

Just in case we haven’t already completely ruined economy class for you forever, take a look at how Neistat’s first class flight went down, in the video above.

“It really does change your whole relationship with travel,” Neistat says at the end of his video.

“When you take what was the most painful part of traveling, and instead of that being a terrible experience, it makes the whole experience of traveling so much more pleasurable.”

We’d absolutely give this a go – if we didn’t have to pay six months salary to do it!

Images via shuttershock.com and Emirates.com.

Comment: Would you pay $21,000 to fly in the luxury of Emirates first class?