Here’s What Happened When I Got Keratin Hair Straightening

Does it actually last the test of time?

If there’s one thing I inherited from my mother, it’s her frizzy, unruly hair.

You could describe it as a cross between wavy and curly, with a few random straight strands at the back; in other words, a hot mess.

Air-drying my hair after a wash is impossible as I end up looking like I’ve been electrocuted, so I spend 20 minutes blow-drying it, followed by five minutes of straightening the most stubborn parts. I repeat this painfully tedious routine at least four times a week, which adds up to almost two hours weekly (ugh) to get my hair to look somewhat tamed.

Of course, this effort becomes completely useless when there is even the slightest bit of humidity in the air, or even worse, when it rains. Within minutes, my hair looks like a mess, no matter how many clever hair spray tricks I’ve employed.

Hair smoothing shampoos, conditioners, and masks have been largely disappointing. While some didn’t make a difference whatsoever, others simply seemed to make my hair heavy and greasy. So, while I was skeptical of its touted benefits, I decided to bite the bullet and try an in-salon Keratin treatment.

Keratin straightening treatments have been around for decades, but what used to be a smelly, chemical-packed seven-hour ordeal at the salon, has evolved into a more natural, gentle, formaldehyde-free one-hour visit. Who has time for more than that anyway?

I opted for a keratin infused bhave treatment, which was created by “two long-suffering females of the defective hair brigade”, Sheryl and Michelle. In contrast to a lot of other keratin treatments, this one works on all hair types and won’t strip the color off (a slight discoloration is possible, however, in my case, it didn’t affect my blonde balayage at at all).

Here’s how the treatment went down… 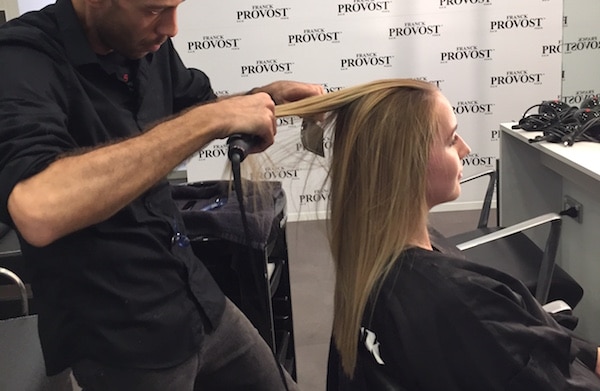 My hair was washed before the bhave solution was carefully combed through to ensure every strand was covered. The smell was strong, though not entirely bad, it was actually quite sweet. Then the solution was left on for about 20 minutes, during which I felt a slight tingling sensation on my scalp that subsided quickly.

Rather than being washed out – as is the case with regular treatments – the keratin solution was then blow-dried in, before my locks were sealed with a straightening iron to infuse the active ingredients.

Then I was sent home with strict instructions not to wash my hair for at least 48 hours. Though I left expecting to walk around with greasy hair for two days, thankfully the blow-drying and straightening left my hair looking sleek and shiny, and straighter than I had ever imagined it.

The next day I woke up to a Jennifer Anniston-worthy mane, (as it turns out, the actress uses the same smoothing treatment to create her signature look – and I could see why). This was exactly the kind of hair I had always wanted; pin straight, but still somehow light and bouncy.

Not washing it for 48 hours was a bit weird, as the smell of the bhave treatment is stronger than your usual shampoo and lingers for quite a while, so wearing my hair in a ponytail (and away from my nose) was the most comfortable way to make it through.

Keratin treatments aren’t designed to leave your hair dead straight for days on end, but what they will do, is reduce frizz and make your strands way easier to style. Now, one month later, I can say that that’s exactly what the treatment delivered, and I couldn’t be happier with the result.

My frizz is literally gone – even when I put it to the ultimate test and went to the very humid Philippines for a two-week holiday, it was surprisingly well behaved. I still blow-dry it to get it super straight, but it only takes me five minutes now, as I don’t have to use a round brush and style it extensively. Straightening has become optional and I only do it if I want to achieve that pin straight look I had right after my salon visit.

Keratin treatments can last for up to five months and cost around $300, depending on your hair length. It’s a lot of money, but considering the time and effort I now save every day, it’s worth it.

Moreover, the treatment hasn’t damaged my hair at all, and was much easier and quicker than I expected to have performed. It’s fair to say I’m hooked. I don’t want to return to my frizzy, unruly hair ever again, and it’s good to know that now I don’t have to.

Comment: Have you tried keratin hair smoothing? How did it work for you?