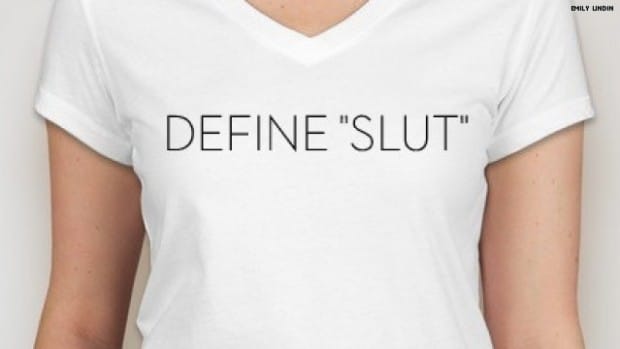 I don’t like the term “slut”. I first encountered it in my early days at an all-girls high school. None of us knew what it meant, so we threw it around as the most casual of insults. That is, until the older girls got wind of it and told us never ever to call a girl that because it was the WORST POSSIBLE THING you could say. “Why? What does it mean?” we asked. The hurried reply was, “It means a girl who has sex with heaps of guys and that’s something you really shouldn’t do, okay?”

There it was – the first time we experienced the phobia of female sexuality. Suddenly, every interaction with a member of the opposite sex was scrutinised. Giggling with a boy on the train? Slut. Kissed more than one guy at the school dance? Whore. Lost your virginity? Skank. The reverse was true as well; if you didn’t talk to boys, wouldn’t kiss anyone, and weren’t sexually active, then you were a frigid prude. You couldn’t win, and you couldn’t say anything about it.

This paranoia was reinforced by mufti day dress codes; no spaghetti straps, no skirts above the knee, no hipster jeans, etc. It was these laws of appropriate dress that got me wondering. Why were we being forced to cover up? Being a precocious girl, I asked one of the teachers, and expected her to talk about wearing comfortable clothes for learning. Instead, her response (I kid you not) was, “Because we have male teachers at this school, and we need to be considerate of them.”

What the actual what?! How was that fair? And why did she have so little faith in male teachers?! Besides, the local boys schools didn’t have those dress rules. They also didn’t scold each other if one of them went to second base with a girl at so-and-so’s 16th birthday. On the contrary… they CONGRATULATED each other. So why was being a girl so different?

Right from the outset, women are conditioned to be ashamed of their sexuality. We come up against this every day, and not just because of our sex lives. This phobia inhibits our behaviour and the way we interact.

Here’s an example. When I am in a social situation with both men and women, one of the less inhibited men will make a few witty comments loaded with sexual innuendo. The whole group will laugh, happily joke with him, and move onto the next topic. HOWEVER…being fairly uninhibited myself, I will usually make a similar comment a few minutes later. Same context, same tone, same situation (and usually funnier). The reaction is always terrifyingly different. The group will stop, look around nervously, and inevitably say three things:

There it is again! We now have a triple standard. Not only are women unable to have sex without being shamed, we also can’t even talk about it. It’s not normalised; you’re either terrible, unbelievable, or (my least favourite) sexually frustrated for bringing it up. And sadly, it’s women who do most of the shaming. Who can blame us? Being embarrassed by our own desires has become second nature.