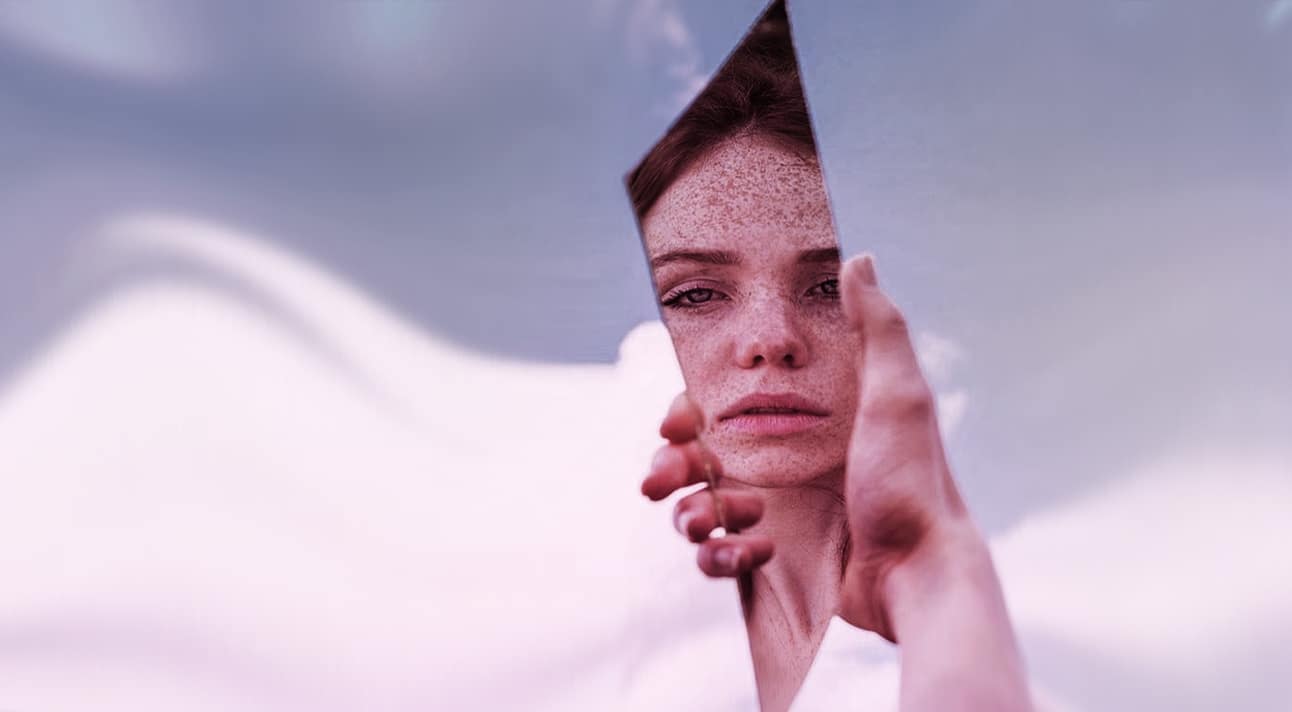 Looking in the mirror, I dabbed lotion around my eyes and wondered if I could skip flossing. I knew bedtime wasn’t the best time to talk to John, but my sick grandfather was on my mind.

“I’ve been thinking about Granddad,” I said.

Maybe I should have picked up on the signs and kept quiet. Maybe he should have said what I needed to hear, that he knew losing my grandfather would be hard. Instead, voices rose and we rolled out the sharpest words. Words like: Divorce and “f*** you.”

Somewhere in the fog, I crossed a line for my husband. He sprang out of bed, and started toward me. I darted out of the bedroom and down the hallway of our country rambler, toward the kitchen.

The most frightening thing was not being shoved against the kitchen table and feeling his hands round my neck. It was his face. A mask of red anger. While he’d been violent before, this time, I didn’t recognize him at all.

Struggling free from his grip, I ran and locked myself in the master bathroom. I cowered between the shower stall and the toilet while the door shuddered and splintered as he kicked it in.

“You don’t run away from me!” he screamed.

Some instinct in me saw an opportunity as his fist pushed through a hole in the door and fumbled with the lock. I opened the door hard outward and pinned him against the adjoining bedroom wall. His arm stuck in the door giving me enough time to get out.

Seeing that I grabbed my cell phone, John fell to the floor sobbing, rocking like a desolate child.

But this time something was different. I didn’t get down on the floor with him and comfort him. While I did want to make-up and move along, he crossed a line for me.

I called John’s sister, Amy, while he still was hunched on the floor. I moved to the U.S. from the U.K. to be with John three years earlier. Amy was the only person I knew who might understand. It was after 10pm when she agreed to come and get me.

The next day, I got home to find the bathroom door removed from its hinges and leaning against a wall in the garage. The splintered wood vacuumed up. John sat at the kitchen table.

He put the form he was working on to one side and put his pen on the table. “I didn’t do anything wrong,” he said. “You pushed my buttons.”

The words entered my head for the first time: Domestic violence.

One in four women and one in six men will experience abuse, including violence, with a partner in their lifetime. On average, more than three women, and one man, are murdered by their partner every day in the U.S.

John’s verbal abuse started while we were dating, but his physical violence was always directed at something inanimate. A pair of sunglasses would fly through the air and smash on the ground, a car would get a solid kick.

I made so many excuses. He was struggling to get his career as a stock broker on track. As long as he knew I loved him, as long as I had sex with him, he would treat me kindly, I told myself. Nothing worked. He got the job he wanted and hated it. I would tell him I loved him, I’d give in when he bullied me to sleep with him. Sometimes he’d say that he knew I’d slept with him to make him treat me better, and that in doing so, I made him resent me.

I didn’t stay because I was afraid he would hurt me if I left. I stayed because I thought if I could find the right combination of behaviors, then I would be able to make him happy. He would tell me sometimes that he wanted to change and I clung to those words, they were like a salve to me when his actions didn’t match them.

We’d been married for four years when this worst incident of violence happened. Then, for four more years, we attended counseling, anger management, and tried to make our marriage work. The counseling was a disaster. John was unable to accept anything the counselor or I said in the sessions and accused us of ganging up on him. Our counselor, he told me, was a “man-hating bitch.”

My grandfather passed away in 2008, followed by my dad in 2010, both after long battles with cancer. When I got back to the U.S. after Dad’s funeral, having lost two of the kindest men in my life, my world shifted. Perhaps that’s why, when a co-worker, a kind and gentle man, asked me for coffee, I went, despite knowing what he would say. He told me he wanted to drive me away in his big white SUV, to love and take care of me. Dear God, I wanted him to.

Instead, I went home to John and confessed to having feelings for someone else.

“You shouldn’t have told me,” he said. “I wouldn’t tell you if I cheated on you.”

John’s words, designed to hurt, to regain control, had the opposite effect.

I started seeing a therapist, Christian, who suggested I talk to LifeWire, a domestic violence agency in Bellevue, Wash. I resisted at first. After all, I’d spent so long normalizing my relationship, that to accept that it was wrong, even though I always knew it deep down, meant dismantling the foundation on which the last eight years of my life had been based.

“My daughter, getting a divorce and another man involved…and it’s not as though John ever gave you a black eye,” said my mom as we were talking long distance about my decision to file for divorce.

This was not the last time that someone close to me wanted to believe a more normal reason, an affair, had ended my relationship.

These responses played into my own doubts and shame. For the last eight years, I heard constantly from John “you’re oversensitive,” “this is how all men are.”

Mom’s response made me feel the same way that John did: that I hadn’t tried hard enough, that it was my fault.

But it wasn’t. I didn’t completely believe that then, but I knew it.

Now I know exactly when my marriage ended. It wasn’t when I had feelings for someone else. It was at the kitchen table in our Carnation rambler. Not when John had his hands round my neck, but the next day, when his initial apologies vanished, as they always did, and he denied all accountability. At last, I see the line clearly.