How Looking At Screens All Day Makes You Sick

This is more serious than we thought.

I spent about 50 hours this week looking at a screen, and, chances are, so did you.

As a writer, the bulk of my screen time happens at work, where I’m in front of my laptop for at least six hours bashing out my stories, and continues when I sit on the train home and stare at my phone, followed by dinner in front of the TV.

I’m so distracted by all the action on my screens throughout the day and into the evening, I’m often guilty of forgetting to actually get my body moving. A quick walk to the corner sushi bar to grab a tuna roll in my lunch break is about as much exercise as I typically muster up during the work week; and I know I’m not alone.

A 2009 study by the University of Sydney found today’s generation are exercising less and becoming overweight earlier than the previous generation was at the same age, with women in their twenties the worst culprits – spending a mere 15 minutes per day in physical activity. The fact our modern lives revolve around digital devices isn’t helping.

Besides the obvious consequences trading being active for scrolling our Facebook feeds has on our bodies (increased risk of heart disease, diabetes, obesity, high blood pressure) there’s another lesser known side effect of looking at screens all day: blue light burnout. The invisible light emitted from our devices can strain our eyes and mess with our body’s internal clock, leading to poor sleeping patterns.

During the day, blue light can be beneficial, as it increases alertness and boosts memory, but it becomes a problem at nighttime when our bodies miss the critical cue of the sun setting, signaling it’s time for our melatonin (sleep hormone) to ramp up, and our body to wind down. Constant exposure to bright lights via our TVs, tablets, computers, and smartphones in the evening tricks our brain into thinking it’s still daytime, causing our body to remain in an extended state of high alert.

The effects of blue light

According to research by The Vision Council, “blue light penetrates deeper into the eye compared to ultraviolet light, so the exposure may damage the retina by exposing the eye to hidden spikes in intensity.”

This can result in a loss of contrast, eye fatigue, blurred vision, neck and back pain, and headaches. This so-called digital eye strain may be temporary, but can turn into a chronic issue if left unaddressed.

As a consequence of looking at screens all day, and especially looking at them right before going to sleep – as 75 percent of Americans do (according to a 2015 study) – many people experience sleep-related disorders and impaired mental wellbeing.

Moreover, it’s not just the actual light that’s the problem, but also the close proximity of the screens to our eyes. The ideal distance of a screen to our eyes is about an arm’s length, but with laptop, tablet, and smartphone screens being quite small, the distance is usually shorter, making it hard for our eyes to focus.

How to avoid blue light

Let’s face it, unless you pack up and move to a commune in the woods, chances are you’re not going to be able to drastically reduce your screen time anytime soon. But you do need to start cutting down on your blue light exposure if you want to get back on top of your sleep.

While it’s true most of us actually need to be on our phones and computers during the day for work, experts agree we should be avoiding them directly before bed, which is the most harmful time to get blue light exposure. Instead of scrolling your news feed in bed, turn off your phone and read a book or have a warm bath for an hour before you plan on going to sleep.

If you absolutely can’t put your phone down (which, FYI, might signal you have nomophobia), you should invest in a pair of light-filtering specs, which are specially designed to protect your peepers from blue light rays. As you can get both prescription and non-prescription light-filtering glasses, they’re recommended even for people with 20/20 vision (and don’t worry – there are actually some really stylish ones available). 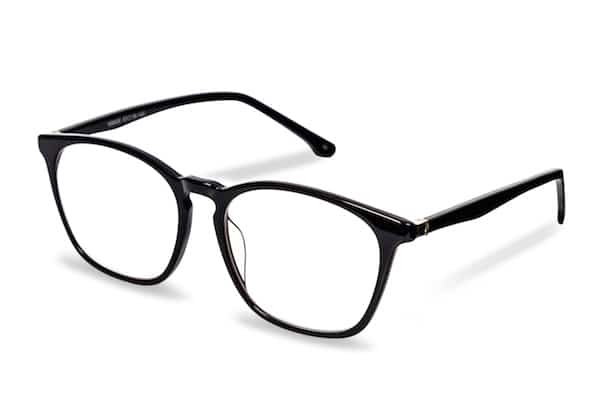 If you don’t want to wear glasses, consider getting a blue light screen protector, which is a stick-on guard that cuts out blue light transmittance.

Realistically, and especially because there haven’t been any long-term studies on the effect of constant screen exposure yet, the safest thing to do would be to combine all of the above. After all, we only have one set of eyes.

Comment: How much time do you spend in front of a screen each week?