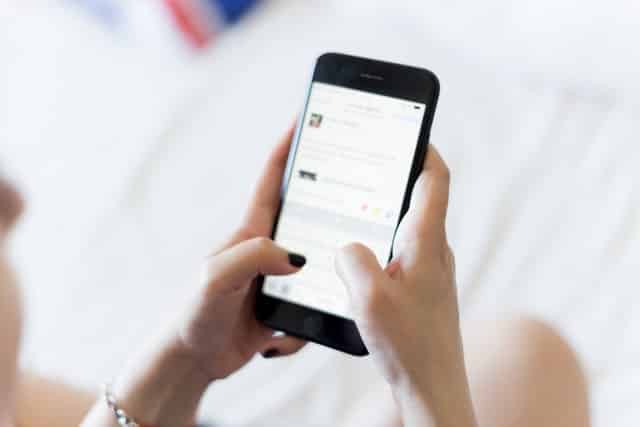 If you thought ghosting was bad, let me introduce you to its crazier cousin–breadcrumbing. You might not even realise someone is doing it to you. Here’s how to tell if you’re being breadcrumbed in dating, and how to respond to breadcrumbing.

It used to be that if a guy wasn’t interested in you and he was too much of a wuss to be straightforward about it, he just didn’t call you – or pick up the phone when you called.

Then texting came along and people stopped calling at all, making dropping someone as easy as ignoring a text message.

But nowadays, there’s not just texting – there’s Snapchat, Instagram, Facebook, WhatsApp…sooo many new and different ways to be rejected. So many hours spent waiting for your phone to light up with a notification, or emit a little buzz to make you feel worthy of attention and affection.

Maybe the increased ease of ignoring someone, and the myriad of ways in which to do it, gave rise to the phenomenon of ‘ghosting’ – the practice of seemingly dropping off the face of the earth when you can’t be bothered to tell someone you’re not into them anymore. But while the term may be relatively new, the action itself isn’t. People have always ditched each other in shitty, cowardly ways; it’s just human nature. We just come up with fresh variations on it, and coin new terms to describe it. (Yeah, people suck.)

What is breadcrumbing in dating?

Breadcrumbing is essentially a much more savage version of ghosting; instead of disappearing altogether, the dude in question waits until you think he’s ghosted you and started to actually recover some semblance of your life and self-esteem, then slides into your DMs, likes your latest Insta post, or sends you a random, inscrutable text message, like the classic-but-infuriating ‘Heyyy’.

Basically, as soon as you’ve written him off and vowed to move on, you’re sent into a tailspin, wondering what’s going on, and what it all means. But alas – these digital crumbs, like the breadcrumbs poor Hansel and Gretel scattered behind them when they ventured deep into the forest, will never lead you home.

Why do people breadcrumb you?

Breadcrumbing is usually a game in which a guy will never actually set a date or follow through on making plans with you, but will pretend the possibility exists. Or, if you want to take a more altruistic view of it, it could be that the dude genuinely can’t make up his mind about what he wants, and doesn’t want to close any doors for good. Whatever the motivation, breadcrumbing lets men feel like they’re keeping you on hold, just in case they decide they want you later.

What does breadcrumbing do to you?

Breadcrumbing, similar to ghosting, keeps you on edge and can make you feel crazy, unloveable, insecure, and totally desperate. If you actually liked the guy and had fun with him at some point, you’re probably hoping you’ll keep seeing each other. Breadcrumbing keeps that hope alive, although only marginally and painfully. It’s as if the relationship you once hoped would thrive is now being kept alive by machines, hooked up to a respirator, with no brain activity.

Every time your phone buzzes, you wonder if it’s him – if maybe he’ll get serious about actually getting together this time, if he likes you, if he hates you, if you’ll ever understand his motivations, and just in general, what the FUCK is going on, and, what’s wrong with men, anyway??!!

What to do if you’re being breadcrumbed

How to respond to breadcrumbing? Move on, sister. A guy who pulls this move is irredeemable. If the random texts and social media likes are upsetting or annoying, block him on all channels and delete him from your contacts. If he left anything at your apartment, burn it (or, you know, sell it if it’s worth anything). While you’re burning things, burn some sage and do a cleansing ritual for your space. (Here’s a good one, if you’ve never tried it.) Remember that you deserve so much better, and don’t let a breadcrumber do a number on your self-esteem.

Ghosting, breadcrumbing – there’s always going to be some new and ridiculous name for dick moves fuckboys have been pulling forever, because they’re cowards at heart and often just terrible people. But above all, you shouldn’t let them make you give up hope: not all guys act like this, and one day, you may even find yourself in a truly healthy relationship.

Comment: Have you ever been breadcrumbed in dating? How did you respond to breadcrumbing?