It’s time to wake up to the smell of Trump’s garbage.

As news journals around the word reported Trump’s video-taped brag-fest about his history of sexual assaults with healthy amounts of disgusted shock, it was amazing to me how quickly his supporters ran to jump ship. Notably Senator John McCain, the GOP nominee in 2008, made a public statement about how reprehensible Trump’s “boasts about sexual assault” were, making it “impossible to continue to offer even conditional support for his candidacy.” Trump’s own running mate, Mike Pence, spoke out against the video, noting his own offense.

As for me? I wish I’d been offended. I wish I’d been shocked, hurt. Because the world is right: Trump’s statement is all of these things. We should be absolutely horrified that the Presidential nominee from one of America’s two major parties – a man who has more than a decent shot at leading our country for the next four years – thinks it’s alright to force himself on women whenever he likes. We should even be horrified at his odd pick for a defense strategy: stating repeatedly that he genuinely believes this is an absolutely normal way for men to talk.

But since I’ve been watching Trump coverage for over a year now, and since I’ve been familiar with the man for long before that, I’m more shocked that people are surprised by any of this.

We remember that this is the same man who claimed that all Mexicans were rapists, right? We remember that he groped his own daughter’s rear on stage on live TV? What about the fact that he’s currently under investigation for raping a child? Remember when he openly mocked a disabled journalist or any of a number of impressively offensive things the GOP representative has said?

Anyone who’s surprised by this video falls into one of three categories: the first is a category of people who haven’t been paying attention to the news lately. They’re exhausted by politics, they just want the whole thing to be over, so they’ve been plugging their ears whenever possible to avoid the whole fiasco. The extent to which this incident has been covered may make it impossible for even the most diligent of politically apathetic citizens to avoid the coverage, leading to their complete and utter horror upon finally learning what an actual garbage heap Donald Trump actually is. 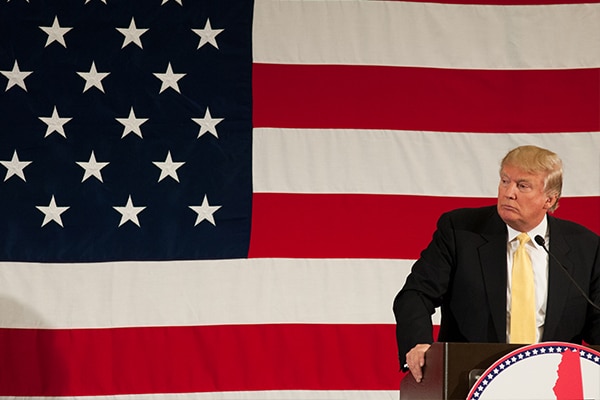 The second is the category of people I think most of the politicians jumping ship fall into. These are the folks who aren’t particularly happy with Trump, but were willing to tow the party line. They’ve been registered Republicans for years, maybe representatives of the party in various locations, and honestly were waiting for one big screw-up that they could point to and say “Here. This thing. This thing is the thing that he said that means I can’t support him anymore.”

Then there’s the third group of people. These are the people who have, frankly, known all along exactly how much of a terrible human being Trump is. They supported him because of it, in fact; because he “says what’s on his mind,” which, for a lot of these people, boils down to “he says all the racist, sexist, small-minded and bigoted things I think but am afraid to say out loud.” These are the people who whine about how “politically correct” our world has become, by which of course they mean “there are all these people who tell me I can’t say racist crap anymore and that violates my false sense of entitlement.”

And now that Trump’s getting real media attention because of something indisputably said on video, now that he’s getting called out by category number two mentioned above, they have no choice but to step back before people learn that they supported everything else he’s said and done. Because, I mean, calling Mexicans rapists and making fun of disabled people is all in good fun, but actual media attention given to a video where he brags about assaulting women? That’s taking things too far for these folks.

Honestly, though, the delusional folks out there who genuinely think he’s the best pick for our country aren’t going to be swayed at all by this. The sexist idiots who think that Hillary’s a liar and Trump is like, way more trustworthy, while ignoring the fact that George W. Bush did the exact same things they’re accusing Hillary of (but he was a dude, so that’s fine. Women as presidents? What if they have their period and start wars?) are going to vote for him no matter what he says or does. Because he represents what they want America to represent: bigotry against anyone who isn’t a white guy, so “Making America great again” by enacting Hitler-esque policies that require Muslims to register themselves and wear identifying markers is okay.

It shouldn’t surprise anyone to find out the majority of Trump’s supporters aren’t highly educated, tend to be between 45 and 64 years old, and are at least 90 per cent white. What’s really depressing though, is the large number of them who make under $50,000 a year. These people are counting on Trump to make their lives better – they think his business acumen means they’ll start succeeding in this country. It’s going to be a sad day for them if Trump enters the White House and tanks the economy in the same way he’s tanked just about all of his supposedly successful business ventures; if he wastes money the way he’s wasted his inheritance. It’s incredibly sad that these people have chosen to vote against themselves because they have no idea what they actually are.

So I suppose these people fall into a fourth category of folks who may be surprised by recent headlines: folks who have been fooled into believing his false promises. I hope more of them wake up. They’ll be the ones carrying a large chunk of the burden of his failures if he wins.

Comment: Do you agree with this viewpoint on Trump?