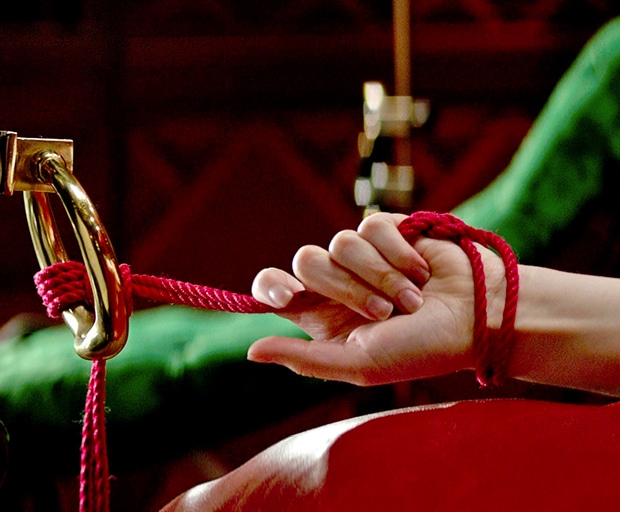 19 Random Acts Of Kindness You Can Start Doing Today

Introducing something new into the bedroom can be tricky, as it requires complete trust in both your partner and yourself.

Confidence plays a key role in this as well; whoever brings up the idea, has to be okay with the fact the other person involved might say no. Also, they need to be willing to deal with some potentially uncomfortable moments, and able to laugh through any awkwardness.

Luckily, my FWB (Friend With Benefits) and I have a pretty solid line of communication when it comes to sex, and we’re both open to new experiences. We’re always down to try new restaurants, new yoga classes, and, yes, new sex toys. So when I heard a 50 Shades Darker themed sex toy line was being launched, and the opportunity presented itself to give it a go, I knew we had to put it to the test.

We got into the 50 Shades theme by having him restraint me to the bedhead with the aptly named Promise To Obey Arm Restraint Set, which immediately took things to the next level, making us both feel super racy and excited.

Once I was secured to the bed, my FWB went down on me and teased me with the vibe before slowly putting it inside of me. We struggled a bit with how to turn it on, but once it was on…we were good to go. The feeling of having him go down on me while the G-Spot vibe was doing what it was designed to do felt incredible. When I finished, we found a way to simultaneously use it to stimulate my clit and his penis at the same time…aka…killer foreplay.

Once we finished, we decided to go for round two and give the 50 Shades Darker Clitoral Clamp a go. I’d never heard of anything like it, and the thought of putting a clamp on something so sensitive freaked me the hell out.

What if it snaps on me? What if it gets stuck? What if I permanently injure my clit? I internally panicked.

But we tried it…and it was surprisingly non-threatening once in play. We used it while he was going down on me and it was so gentle it actually kept sliding off, so we eventually got frustrated and kept going the old fashioned way (sans toys). I wasn’t really sold on the Clitoral Clamp until I decided to try and use it later on when I was home alone, for some solo play. In short, it was WOWWW.

When it came time to actually remove the clamp, again, I was a bit nervous. But I proceeded to take it off, with caution, and it was fine. I survived. (Though for first-time users, I would definitely recommend both attaching and detaching this in front of a mirror.) Now I’m a bit more familiar (and comfortable) with how to put it on and take it off, I’m comfortable using it with my FWB.

My final verdict? With or without a partner, these toys rock. The manufacturers knew what they were doing when designing them. Though I wasn’t game to give the full line a go (I’m not yet ready to go down the butt plug route), for couples that have a bit more experience with sex toys, these toys would undoubtedly be especially fun. I still definitely prefer the old fashioned way of doing things in the sack, but it’s always fun to think outside the box… Pun intended.

Comment: Have you tried introducing any kinky sex toys into your relationship?