Once you’ve tasted the dark side, you don’t go back.

When I first met Tom, I was extremely underwhelmed.

I’d decided to see him on a last-minute whim after we’d exchanged small talk on a dating app while bored one Sunday afternoon. According to his profile, he was a beachy 29 year-old plumber with ash-blond hair, a tall athletic frame, and cloudy hazel eyes; more or less the opposite of my type.

Nevertheless, I resolved to give myself a chance to get to know him, and headed for the bar he’d suggested we meet at.

It became painfully obvious in the first few minutes of conversation that Tom and I had little in common. The entire date felt like an awkward job interview as he nervously shot off banal questions and vainly attempted to fill every silence by shooting me an expectant look, punctuated by a goofy “Soooo….”. His own conversational responses were rarely longer than a few words, and delivered so dryly I found myself discreetly checking the time on my phone on several occasions to see if it was acceptable to leave yet. The date ended without so much as a kiss, and I mentally checked it off as a fail.

But a day later when my phone lit up with a sweetly worded text from him asking to see me again, I couldn’t help but wonder if perhaps nerves had gotten the better of him and he deserved a second shot. Before I had time to process it, my thumb had already typed as much, and I found myself staring back at the details of our next date. He’d planned for us to go surfing, something I’d never normally agree to do, given my aversion to sand, salt water and outdoorsy activities, but I was so impressed by the effort he’d gone to, making our second meeting unique and adventurous, I couldn’t bring myself to back out.

Thankfully the waves on our surf date crashed as spectacularly in the sea as they did in the chemistry brewing between us. In his element on the beach, Tom seemed somehow emboldened – a more outgoing, hedonistic version of the meek, dull guy I’d met at the bar. 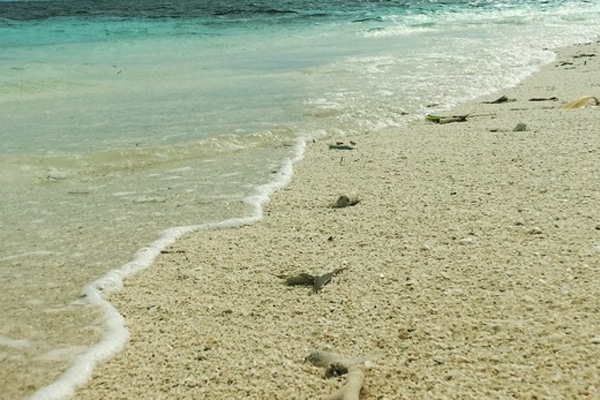 He grabbed me roughly in both arms as we fell onto the sand, still wet from our surf lesson, and catching our breath, cradled my face in his hands and kissed me deeply and passionately, as if he’d known my lips for years. His mouth was soft and tasted like salt water. His hands had the reassuring roughness of someone who wasn’t afraid to get dirty.

Suddenly I found myself feeling attracted to him.

Then, mid-kiss, he took my bottom lip between his teeth and bit down forcefully until I winced out loud in pain.

“Hey! Not so rough!” I laughed, pulling back and nursing my swollen lip between my index finger and thumb.

“You didn’t like that?” he asked, a devilish smile spreading across his face.

Tom pulled me in again and buried his face into the nape of my neck, this time using his tongue to caress the little groove of skin just above my shoulder blade. My skin prickled with delight, sending an unexpected shiver chasing over me.

“Ah, you like that, huh?” he smirked self-assuredly, sensing he’d discovered my sexual kryptonite.

“Perhaps…” I teased, struggling to conceal the contented smile pushing my cheeks high.

From then on, Tom continued to surprise and impress me.

On our third date, he invited me to his apartment to win me over with his culinary skills, appearing unexpectedly sexy tossing a stir-fry in a tight white tank embossed with the outlines of his muscular body, and a pair of old jeans that hung low enough to reveal the band of his Calvin Klein underwear.

Noticing me appreciating him from the other side of the kitchen, he balanced the wooden spoon against the edge of the pot and turned his attention to me, sliding his arms around my waist and kissing me deeply – once again using his teeth as a vice around my bottom lip before scooping me up onto the bench and wrapping my legs around his torso so I was straddled around him.

I involuntarily moaned in pleasure as I felt the heat course up through my body.

He reciprocated, clamping his teeth down harder into my lip until I tasted blood.

I winced, but didn’t pull away.

There was a darkness to Tom I couldn’t quite put my finger on; a rough forcefulness in the way he touched me. It was as if he wanted me to know he could overpower me – that I would be completely helpless if he wanted me to be. Perhaps it was the fact I was a control freak in a high pressure job where the onus was perpetually on me to tell other people what to do; but I found myself strangely drawn to it. 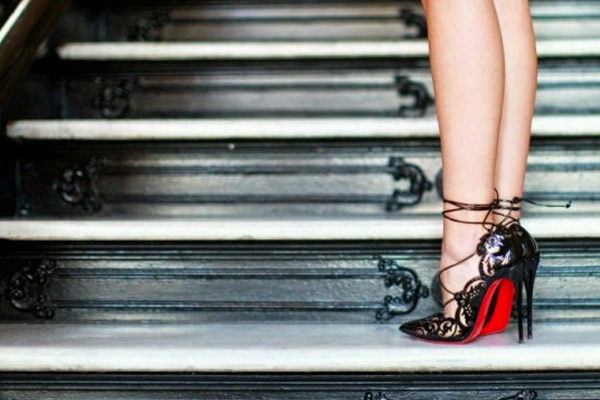 It was a week before I heard from him again after that. He’d had to leave town to visit family for an annual get-together and had texted me once while away to ask what I was up to. During our time apart, I found my thoughts regularly circling back to the idea of uncorking the bottle with his dark energy brewing inside. I wanted to know what he was capable of, and if his unexpected flashes of dominance in our physical interactions had hinted at something more.

I buzzed his doorbell just hours after his flight home had landed, feeling an almost insatiable yearning rising within me. Tom opened the door and didn’t speak.

I waited a beat, then awkwardly cut the silence.

“I missed you,” I found myself revealing bashfully, willing the silence to end – his hazel eyes piercing into me now with an intensity I hadn’t seen in them before.

He didn’t respond, instead hooking a muscular arm around my waist and using it to seize my body tightly into his; his other free hand smoothing underneath my sheer black tank whilst kissing me intensely.

My legs went to warm liquid, buckling as he turned me around and pushed me against the wall forcefully, so my lipstick smudged against the white wallpaper, leaving an iridescent pink arc emblazoned across it. He crouched down behind me, chasing his hands underneath my faux leather pencil skirt until they found the top band of my black lace thong and tugged it down to settle around my stiletto heels.

I closed my eyes and pressed the palms of my hands against the wall to drink it in as he slid his coarse hands back up my legs once more until his face was buried beneath my skirt and his fingers were deep inside me.

My breath was shallow and labored now. My legs quivered, threatening to collapse beneath me as he ran his tongue up and over the curve of my buttocks and settled it in between my cheeks, hungrily dipping it down as deep as it would go into unexplored, euphoric territory. Finally my knees gave out and I dropped to the floor on all fours, my body weak with desire for him.

“Stay still,” he commanded; a sudden sternness to his voice.

“Why? What are you going to do to me?” I asked; simultaneously exhilarated and terrified.

“Just stay still, and touch yourself; here” he dictated, taking my right hand in his and placing it deep within the wet folds of flesh between my legs. I moaned involuntarily again and obliged, tracing my index finger back and forth over my clit like a student eager to please her teacher.

Tom grasped my hips tightly and slowly entered me from behind; an oddly painful pleasure surging through me as he pushed each inch further.

“Wait. I haven’t done this before…” I protested, my voice trailing off into a breathy whisper as I felt him disappear deeper inside me; the strange euphoria keeping me from reaching back and stopping him.

“Do you want to be good for me?” he responded, in a tone reminiscent of an exasperated parent chastising a child.

I did. More than ever.

“Just keep touching yourself like I told you,” he added; an unmistakable note of authority in his voice.

I obliged and felt him engulf me from behind, heightening every sensation so the fine hairs on my arms danced like flags in the wind, my face twitched, and the warm folds between my fingers ached a sharp, intense ache.

“Good girl. You know where I have my cock right now? You like that, don’t you?” he asked, a smugness in his voice as he slid one hand from my hips and into the wet ache pulsating between my legs.

My body convulsed in response; climaxing so intensely my hand slid out from under me, sending my face crashing into the floor.

Tom gently grabbed a chunk of hair on the back of my head and pulled me back up by it.

I willed myself to stay up on all fours, but my limbs felt like precarious card towers, threatening collapse at any second. I turned my head back to look at him. His face was intense, his eyes still and fixed on the smudged wallpaper in front of us as he methodically thrusted into me; one hand still clasping at my hair.

I was eager to play along now.

“Is that what you want?” I asked, my voice raising up several octaves to a schoolgirlish pitch.

Tom’s eyes met mine, his pupils suddenly bursting open like black umbrellas in the rain, a smile spreading across his face.

“I’ll show you what I want. Turn over,” he demanded. 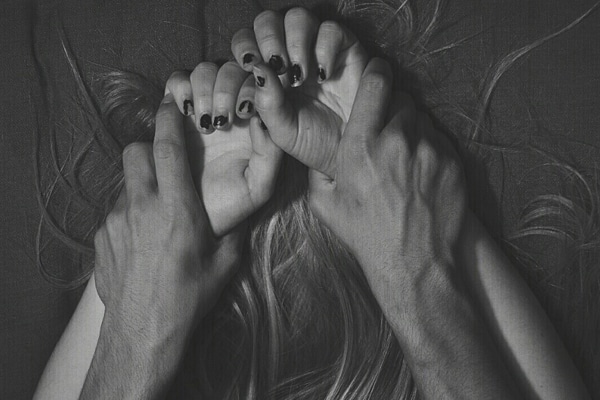 I flipped onto my back obediently and twisted my legs around his muscular buttocks as he plunged himself inside me; his strong body suddenly going limp as he groaned in release before rolling off of me and gently pulling me in to his muscular chest.

We laid there in silence, neither one of us feeling the need to fill it, before drifting off to sleep.

The next morning we strolled lazily along the beachfront stores by his house until we found a cafe and settled there, eating hash browns and fried tomatoes between sporadic exchanges of pleasantries. Somehow the table between us felt like a chasm again, taking me back to that fumbled first date encounter.

Our physical exchanges were so charged, but it was as if, in the moments between them, we couldn’t connect at all.

And so, as the waves crashed on the beach behind us, we finished our coffees silently, and bid each other farewell.

Tom and I saw each other a few more times after that; eventually reserving our catch-ups exclusively for the bedroom, where I let him unleash his darkest fantasies, and found myself being taken to new heights of pleasure I hadn’t known existed as I let him do things to me I’d expected myself to abhor. Then, just like that, our dalliances would end and we’d return to moments of awkward silence that grew louder each time they occurred, until they turned into time and space, and we gradually drifted apart.

It’s been a long time since I’ve seen Tom now, but I still think of him every so often. Usually when I’m alone in bed at night, and my hands find their way under my pyjamas. And every time I do, I bite down on my lip until it pierces the soft flesh inside my mouth so that it bleeds, ever so slightly.

It hurts. But I like the way it tastes.

Comment: What’s the hottest sexual encounter you’ve ever had?