Why One Woman Lived Like A Refugee For A Week

The refugee crisis is not going away, but Samantha Bartlett says we can help tip the scale back towards justice.

It can be so easy to separate ourselves from problems that don’t, and probably will never, affect us.

I’d be lying if I said I wasn’t guilty of this.

I tend to place a virtual dome around myself, with my own problems flooding inside and the rest of the world’s problems blindly passing around the exterior.

Immigration and asylum seekers are on everyone’s minds right now, as photographs and videos of children locked in cages, begging to be reunited with their parents at the US border, continue to emerge. It’s near impossible to ignore such a foul breach of basic human rights.

And while most of us will never understand the trauma these refugees have been through, there are still ways to both empathize and raise awareness for them. Twenty-six year-old Samantha Bartlett undertook the Act for Peace Ration Challenge, a challenge that requires participants to eat the same rations as a Syrian refugee in Jordan, to prove just that.

“I was scrolling through my Facebook feed and I was thinking about all of the first-world problems that we think are so important on a daily basis,” Bartlett says.

“And then when I saw the challenge it put things in perspective for me. And I realized how lucky we actually are to have some of these first-world problems and I wanted to do something to raise awareness for refugees.”

Bartlett has a history of working with not-for-profit organizations, particularly local women’s refuges, and considered the challenge to be a concrete way to express her passion for social justice.

The challenge, which took place in late June, runs over seven days, with each participant receiving a food pack with the exact same food and quantities, as would be distributed to a refugee. 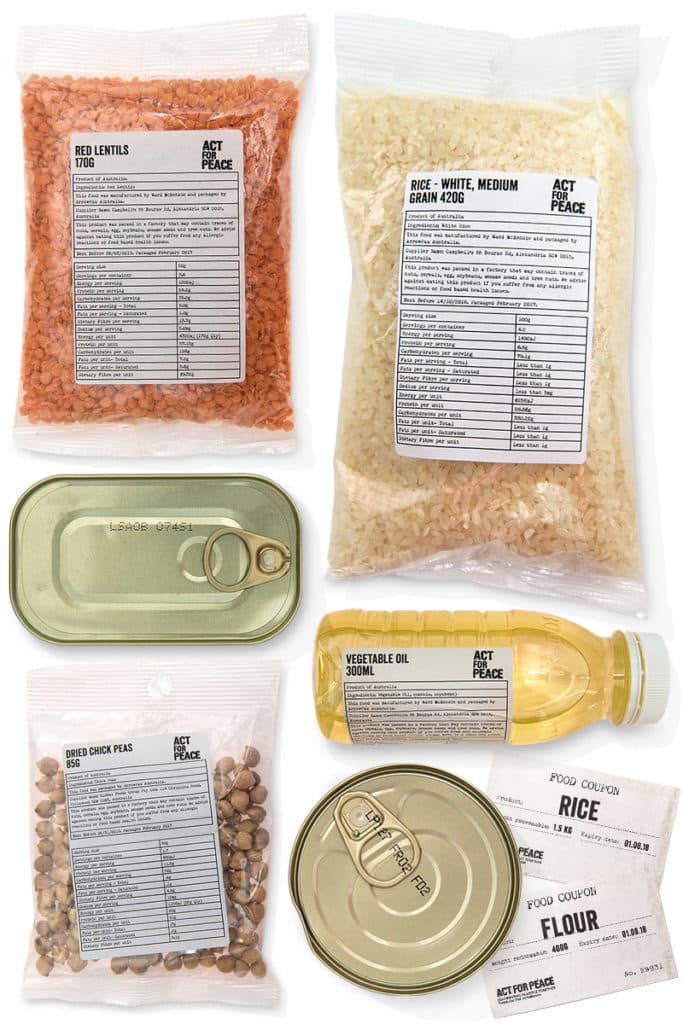 You heard correctly. That pack has to last ONE. WHOLE. WEEK. For breakfast, lunch and dinner. And there’s no trips to the supermarket allowed to add flavor to this bland combination of ingredients. This is everything participants eat.

“You can also make things like flatbreads and falafels. I accidentally burnt my falafels to the crisp, but I still ate them because I was really hungry. They just tasted really bad.”

Personally, I can already envision myself becoming frustrated and deflated within a day or two, but Bartlett didn’t really reach a breaking point until half-way through the week.

“I was traveling for work that week as well. I had a six a.m. flight, so I was waking up at four a.m.. Once I got there I was just so extremely tired, because I had spent the night before making the flatbreads to take with me so I could eat those during the week as well.

“Not having coffee and not having anything sugary all week, I just felt so flat I was almost about to give up.”

Just like overeating, under-eating can have an extreme impact on our health with symptoms like low energy levels, mood swings, dizziness, constipation, hair loss and pale complexion, all common.

And while Bartlett may not have realized how obvious her symptoms were to others, her friends, and colleagues sure picked up on it.

“My friends and my colleagues said that I was very spaced out and seemed very demure. Almost like I wasn’t really contributing to the conversation, because I was super quiet. It made me withdraw, especially throughout the middle of the week, which was probably the toughest part.

“I felt so drained. And then the other part of it was that I started having headaches and dizziness so I was just sitting down and trying to get through work but finding it super hard at times. So I definitely saw the change in myself as well.”

“I could still do my job but it just took a lot longer to complete tasks, meaning I had to stay back longer and modify the way I did it.”

A week off work was obviously not an option while undertaking the challenge, but it was Bartlett’s social life that really saw the strain.

“I had to just put my social life on hold because I felt like it was so much easier,” she said.

“When I hang out with my friends, it literally revolves around eating and drinking. I didn’t want to be a massive burden on people so I just withdrew. My friends invited me out one night and I just said that I couldn’t do it. I didn’t want to have to go out and sit at a bar and not drink anything and feel so out of it.”

To me, it almost sounds like refugees are stuck in a constant haze, unable to physically or mentally fight to protect their own rights.

“One of the mornings I went downstairs to make breakfast, it was the last morning of the challenge and I was just going to make some rice and kidney beans and I walked downstairs, which is less than a minute walk in my house, and by the time I got downstairs I was so tired I literally had to sit on the kitchen floor for 10 minutes before I could stand up and continue making food.”

Beyond the obvious symptoms, under-eating can also dramatically affect women’s fertility. Skipping meals or not eating enough can result in ovulation being skipped, resulting in an anovulatory cycle.

While Bartlett only ate this way for a week, many refugee women and young girls are silently damaging their bodies without realizing, because of their scarce food portions. This can make it extremely different to conceive down the track.

And even when the challenge was complete, Bartlett was still struggling.

“I’m eating a lot more food and I have this desire to just eat everything in sight,” she admits.

“The quality of foods that I’m eating are lower as well because I have this craving to constantly eat sugar. I think it’s because my body has gone through a starvation mode almost. It’s like making up for that time, eating anything and everything.”

Despite how hard it has been both during and after the challenge, what Bartlett learned was well worth the hardship.

“I found it hard for just one week to live on the rations. And so I don’t know how people do it for years at a time. I was watching a video where men, women, and children, were holding up signs for how long they’ve been in the camps for, and it was 3000 to 4000 days.

“I came into the challenge in awe of refugees and how determined they are to rebuild their lives, and do whatever they can to support themselves and their families, but this challenge has grown that appreciation so much.

“Having said that, this is such a small portion of what they’ve gone through. They have run from homes and left everything behind, and the food that they receive is only a small amount of what they’re missing out on too.

“So while I can say it’s probably brought me a little closer, I don’t think I’m even close to understanding fully what they’ve been through or go through.”

Since Bartlett is both an American and Australian citizen, where refugees remain a controversial topic, she says this challenge hits extremely close to home.

“It’s really hard to see children being detained, and locked in cages, and taken away from their parents at the US border. And all that’s happening under the Trump administration, this has been a really good way of not feeling so helpless.”

Comment: What’s your stance on the current refugee crisis?