People have always asked me if I dyed it black and I’d say, nope. Of course, I have dyed it other colors in pursuit of a fun change and various projects: reds, lighter browns, unnatural hues such as pink and blue. But the most elusive shade of them all was blonde. Not dirty blonde, not highlights, but blonde as in a head full of platinum hair with glorious dark roots growing in. I’m talking 1987 Jenny Wright in Near Dark, 90s-era Courtney Love and totally-in-the-now Cara Delevingne.

But… (cue tiny violin)… it just didn’t seem like it was going to happen for me. When you put bleach on an ultra-brunette like myself, first it turns orange. Like bright copper penny orange. Then it turns yellow. Like banana yellow, egg yolk yellow, cute little Easter chick yellow. And then, that’s pretty much the end of the line. Because if you try to keep bleaching it, which you have to do if you want to get past the yellow phase, it will most likely break apart and fall off or just burst into frazzled frizzies that can only be banished by shaving your head.

In my twenties, I laid down cash bucks at an NYC salon and said “Make me blonde!” (okay, I actually was more like “Um, could you like, um, bleach my hair….? Do you take payment in quarters and dimes?”) The process took a long time and whooo-eee it hurt. Plastic bag over my head, I stumbled outside onto the steps of the salon, trying to take deep breaths, ignoring the stares of people passing by, hoping the cool air would ease the burning of my scalp (it didn’t). The end result: Banana Egg-Yolk Easter Chick hair. Sooo… there was that. 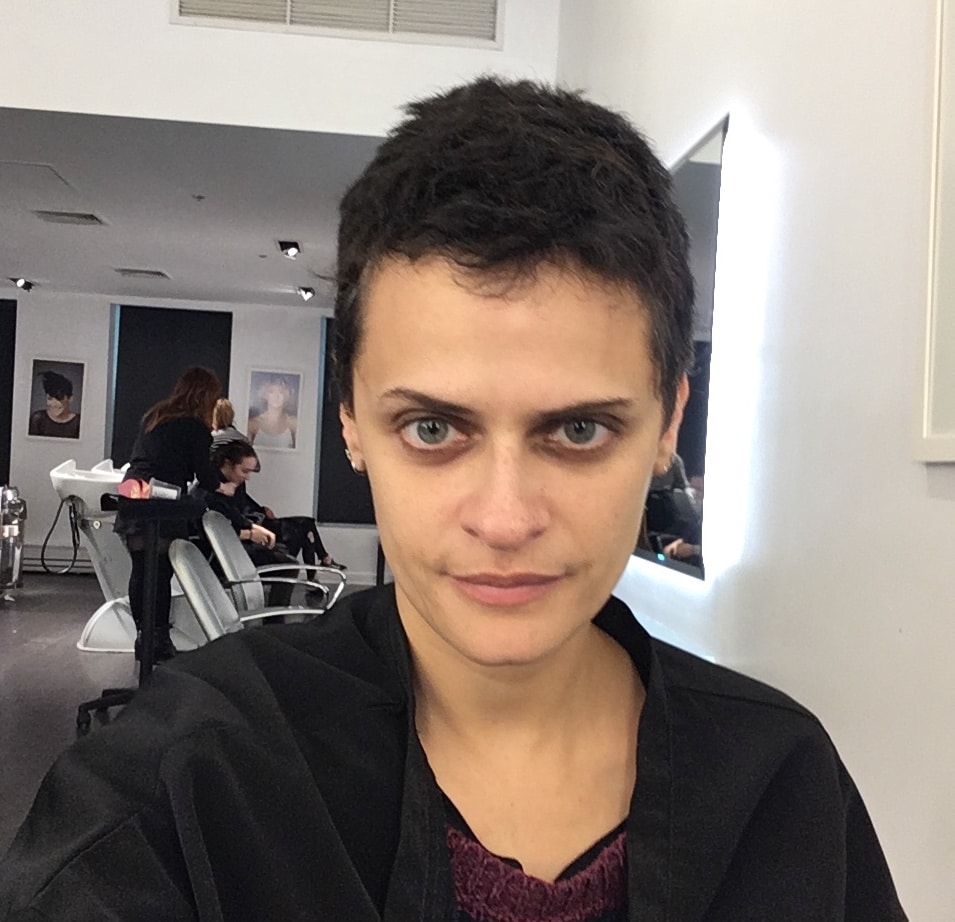 But I’ve been hearing about this new process that’s miraculous AF called Olaplex. Now, I’m a writer, not a scientist (dammit!) but I understand that hair has bonds or something…? And these bonds get all messed up and broken when you screw around with harsh processes and chemicals such as bleach. 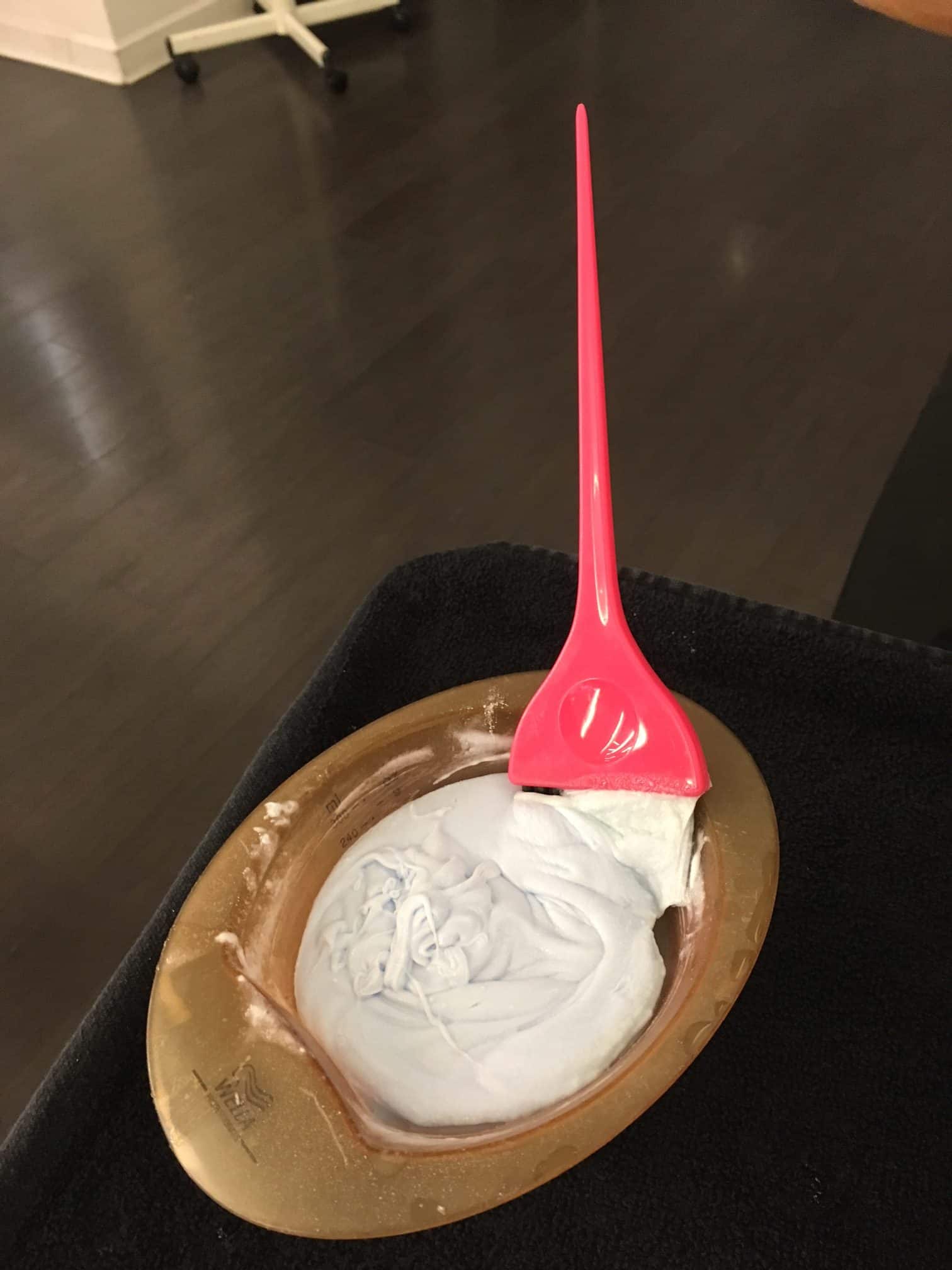 “Basically, chemical services (color, bleaching etc) can be very damaging to hair,” explains the wonderful (pretty much magical, actually!) Elena Tavarez (you need to follow her @elenatavarezhair!) at Cutler Salon in the fab lower Manhattan neighborhood famously known as SoHo. “Olaplex helps keep those bonds, that are typically broken during the chemical service, intact. This helps keep the hair healthier” — not as healthy as virgin hair, notes Elena — “and allows colorists to push the hair further then they would without using Olaplex.”

“I have been using Olaplex for a few years now and have seen a big difference in how I am able to color hair,” she continues. “Olpalex can be added to any chemical service, and can be used for every application. When adding Olaplex to color, the results that I am able to give my clients has greatly improved. My clients hair is healthy, we can push it further (go blonder then before), make drastic changes, and do major color corrections.” 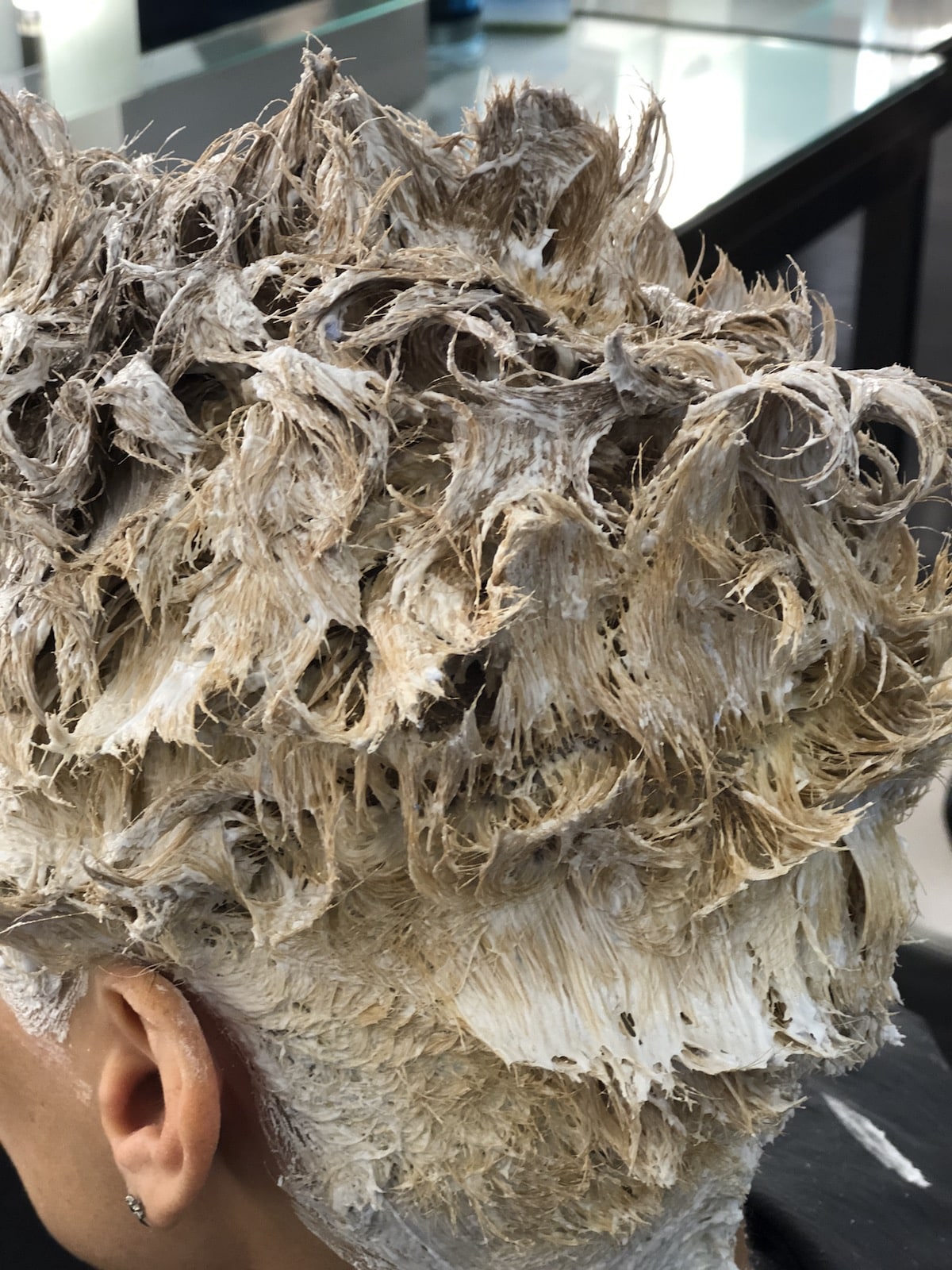 When I went to see Elena, my hair was cut into a short pixie cut and as black as usual, except for some gray strands. Sure enough, Elena had to push it so that we could get to that desired (and seemingly impossible) platinum blonde shade. I was worried about what “Olaplex” would actually entail. I kind of imagined it as being a cross between witchcraft and sawing off a pinky. I’m sure a lot of us would gain a curse and lose a pinky in order to really go blonde. But no, Elena just mixed the solution into the bleach and applied it to my hair (at Cutler, adding Olaplex to your process is $40). Here she is putting on the first application. 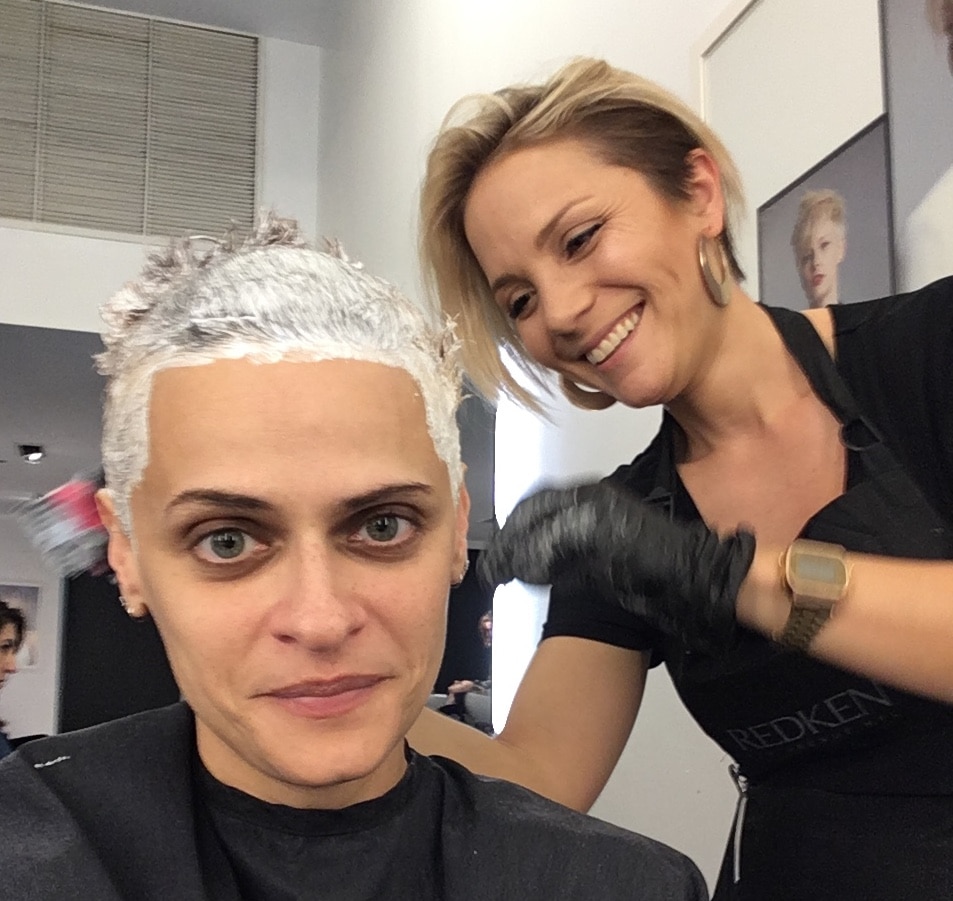 After the first time, my the bleach and Olaplex were washed out and… I had Banana Egg-Yolk Easter Chick hair again. I looked a little like the Joker. I will definitely not share the picture from that stage. Oh all right, here it is. That’s me with Elena’s assistant Ona, who assisted with the hours-long (almost six hours!) process. 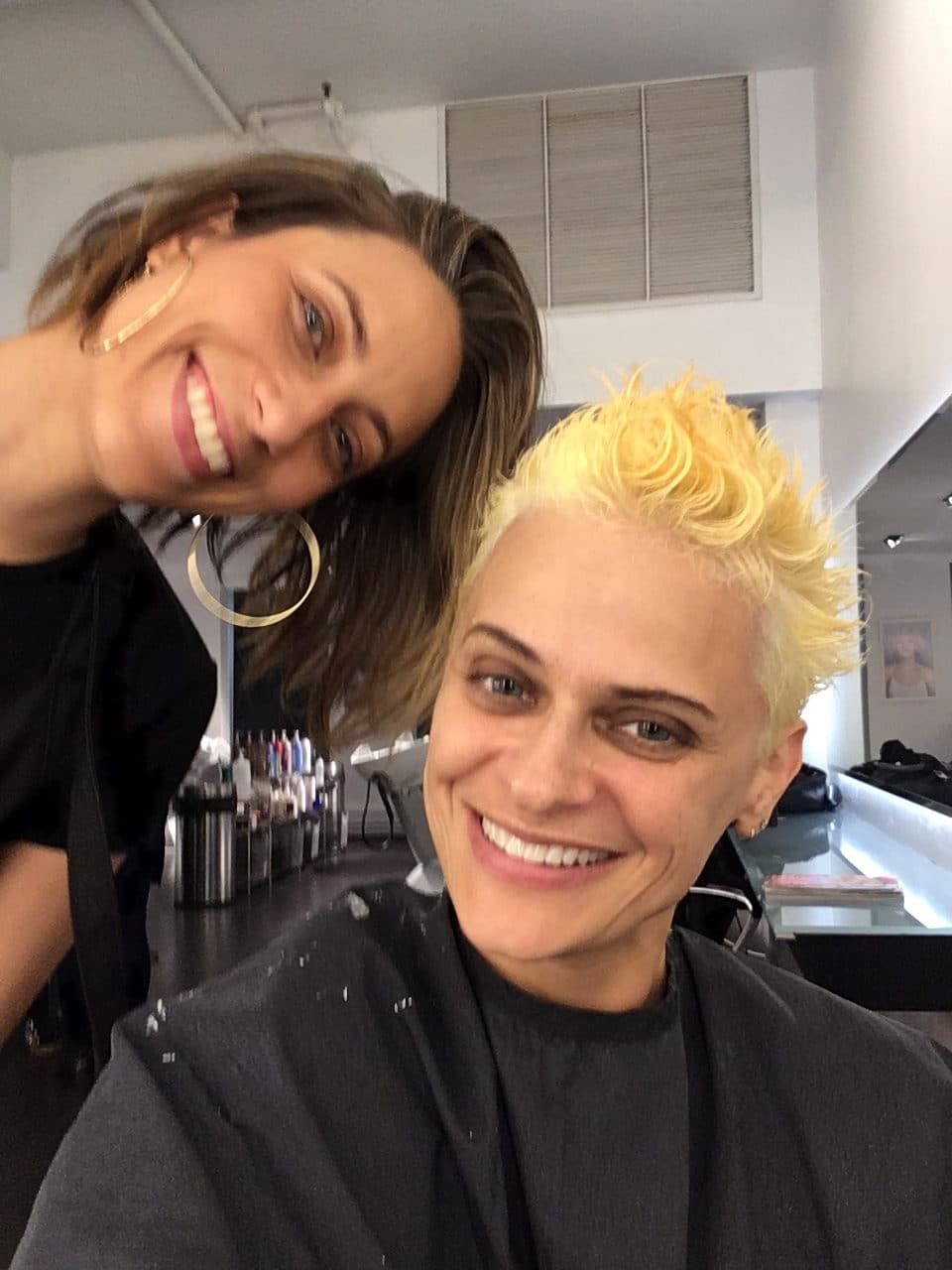 On went the bleach and Olaplex again. After the second time, with my hair slicked back, I TOTALLY looked like the Joker, and no, I will absolutely not share a picture from that stage, no way! Okay, fine. 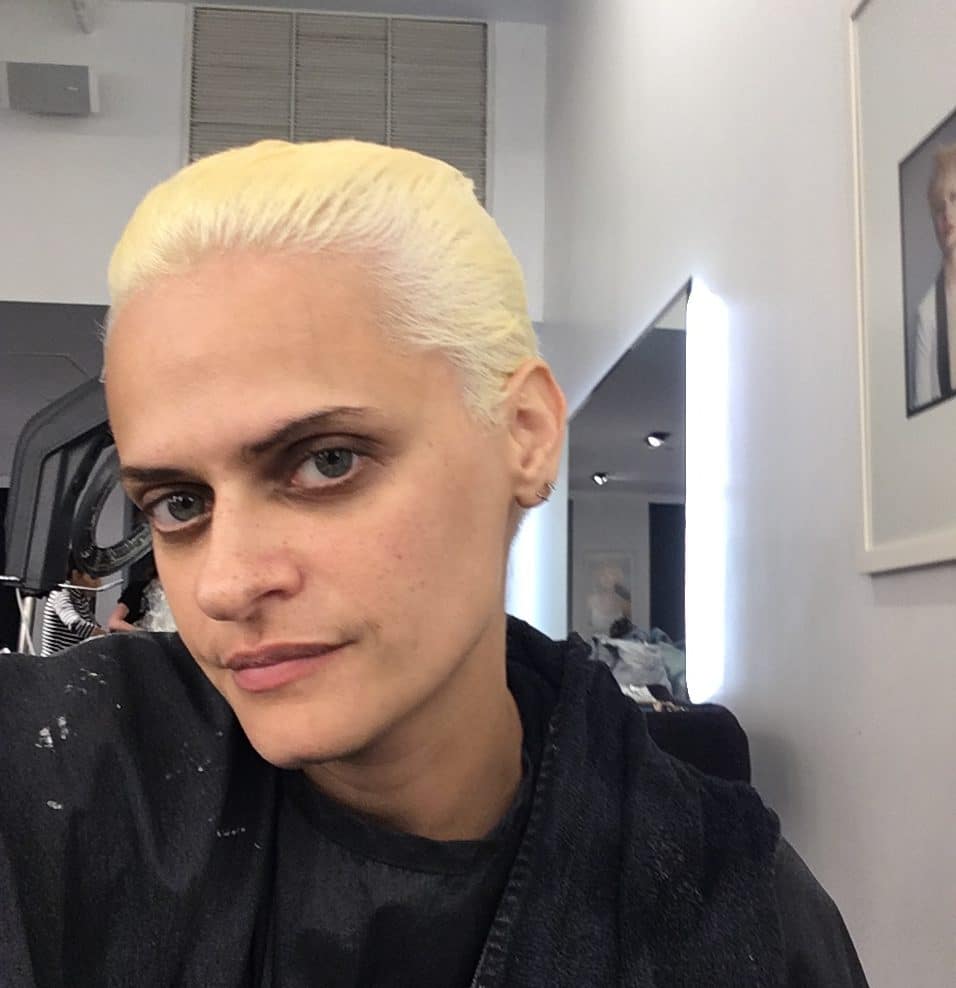 While I indeed looked sinister, it wasn’t really the type of badass look I was going for! And then… Elena applied the bleach for the third time. Now, I’m not going to lie to you: my scalp hurt. It really hurt. I didn’t have the guts to walk out onto busy, trendy West Broadway in front of busy, trendy New Yorkers and tourists with a plastic bag on my head and a tear in my eye. Instead, I paced the salon. I went into the bathroom and took deep breaths. I took off my Docs and massaged my feet, avoiding eye contact with any of the busy, trendy clients of Cutler Salon who were handling their processes way better than I … and they had also remembered to bring food! #$*@($#*!!! And finally…  after some Redken toner to add cool tones to my hair… 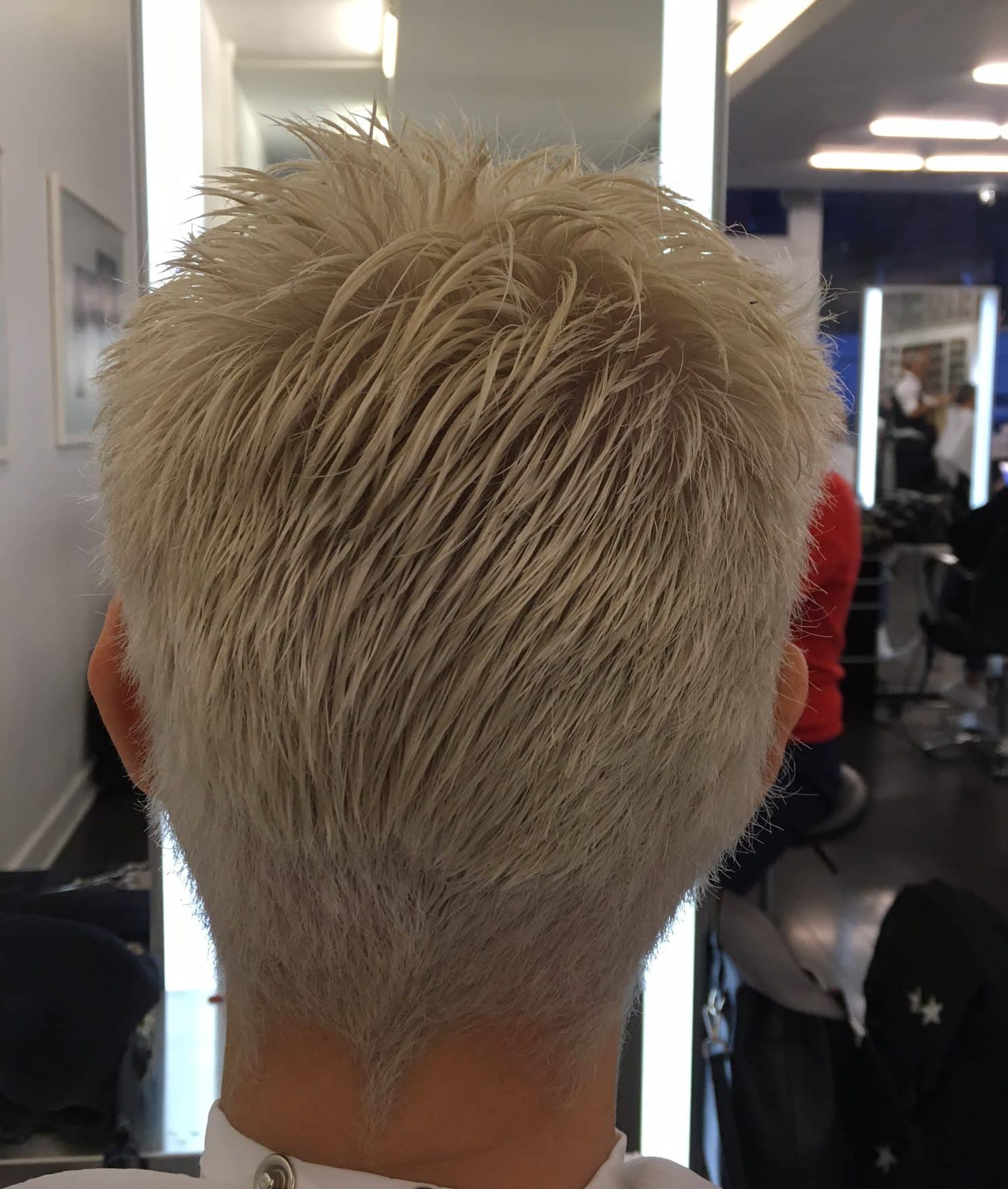 Not yellow blonde, but beauteous platinum blonde, the kind of color I’d always thought would look really rad but figured just wasn’t in the cards for me. My scalp was tender but had stopped hurting as soon as the solution was washed out. (I had no problems after that except for a little itchiness.) Far from being damaged, my short strands were spiky and shiny and responded happily to an impromptu pixie cut touch-up by Jocelyn (@jocelyn_hair). (Apparently, when I did my usual buzz clipper job at home, I missed a few spots. Who would have thought?) I had wondered if the blonde hair would go with my olive complexion, but I loved it. The platinum made my dark eyes and eyebrows really pop and just completely changed up my whole look. In the frigid, unrelenting NYC winter weather, I sauntered out and about without a hat to show off my locks, and caught a cold. 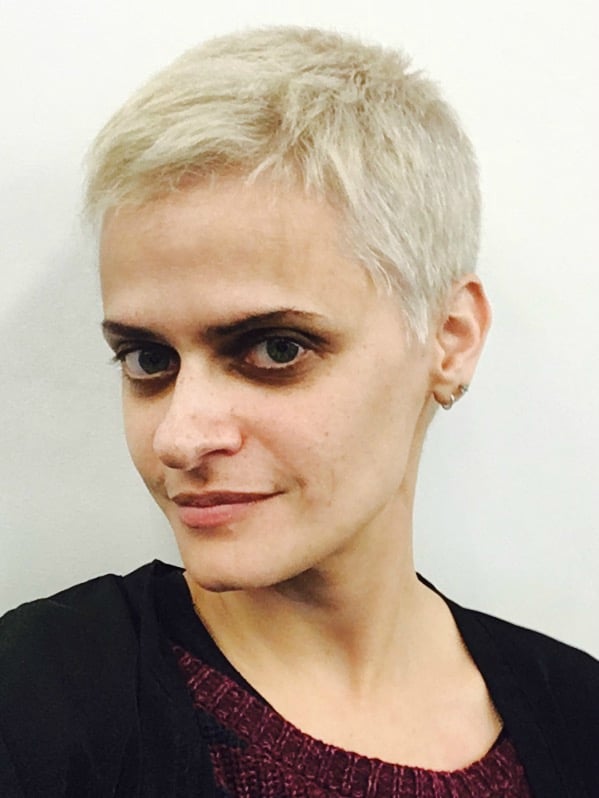 Olaplex is amazing. And there’s more. “On a more regular basis, Olaplex can be added to a highlight or base color service, to ensure that your clients hair stays healthy during the color process,” Elena told me. “Deep conditioners and treatments are all aftercare; the damage has already been done. Deep conditioners make the hair ‘feel’ better, but are not actually penetrating the hair and fixing it on a molecular level. Olaplex does just that. It is like an antibiotic for your hair. It doesn’t make you hair feel or appear healthy, it actually makes it healthy from within.”

Do you hear that? Do you? You can be blonde too (if you want). We don’t have to overthink it; I was happy as a brunette but just felt like a big change. Now, a few weeks later, I have these seriously dope dark roots coming in and I love it. I’ll working those dark roots for a while — and then it’s back to Elena for a touch-up with Olaplex, of course. Blondes don’t necessarily have more fun, but if you want to explore your platinum side, nothing should get in your way.

Comment: Now that we have Olaplex, will you try to go bleached blonde?