Save up so you can travel the world to eat ice-cream.

On the gloomiest of days, a delish soft-serve has the potential to lift our spirits in a way nothing else can, and these creamy creations are so mouthwateringly good, you’ll actually want to jump on a plane and travel the globe to try every last one.

So get drooling and start planning your next trip… 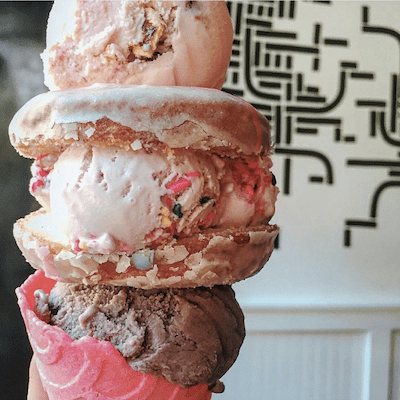 What’s better than three scoops of ice-cream? When one of those scoops is sandwiched between a doughnut – that’s what. This amazing work of art is called the UFO Cone, and it’s only available on weekends. 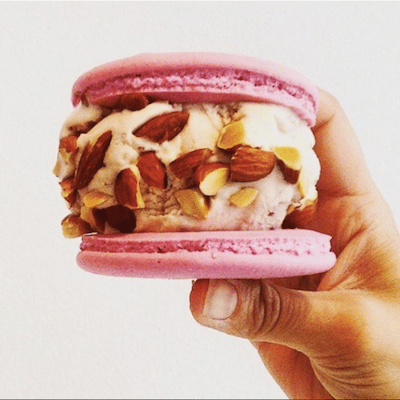 Sammie’s is the nickname given to these indulgent ice-cream sandwiches. Sometimes the ice-creams are sandwiched between homemade cookies, sometimes between fudgy brownies, and even fresh macarons – but whatever the case, the concoctions always look and taste amazing. 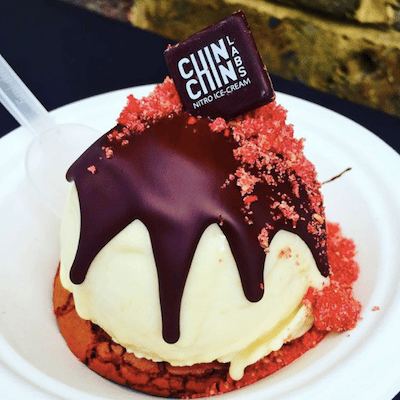 Chin Chin Labs is proud to boast that it was Europe’s first liquid-nitrogen ice-cream parlor. According to The Times, it’s ‘the best ice-cream parlor in England’ – well of course it is; when you pile fresh ice-cream made with nitrogen on top of a brownie cookie (yet another cookie that’s better than sex) and cover it in all kinds of sweet, delicious things, you’re guaranteed to get something amazing. 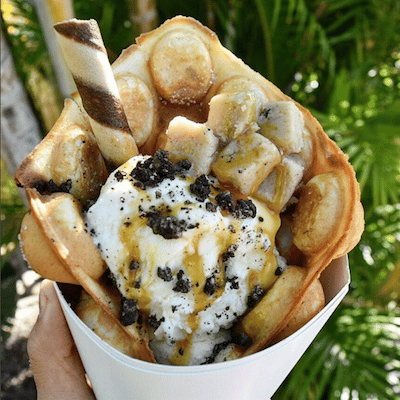 This is not a drill: this is creamy vanilla ice-cream wrapped in a cookie-dough-filled doughnut cone – that’s all of the best things in the world. The creators of this magic travel across Australia, making this ice-cream as elusive as it is delicious. 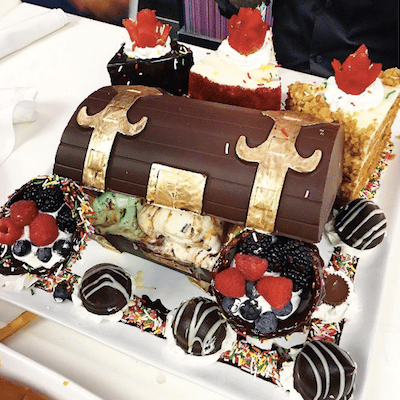 A treasure chest made out of chocolate and painted with edible gold, stuffed with 12 scoops of ice-cream and accompanied by three different slices of cake, deep-fried Oreos and some berries (that makes it healthy, right?). Whoever created this dessert is either a genius or a madman. It’s exxy, but can you really put a price on heaven? 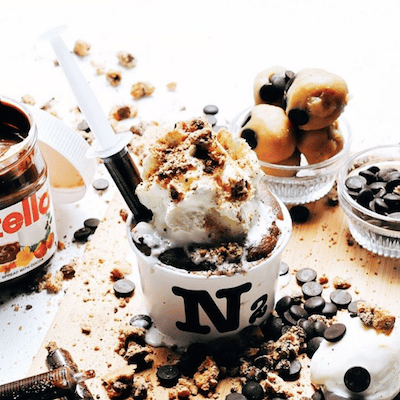 Mixing food and science is awesome. N2 uses liquid nitrogen to make smooth, creamy gelato, and even though the flavors are constantly changing, they are consistently amazing. Each one usually includes a range of different textures, and sometimes even a syringe filled with Nutella (Nutella can do no wrong – proof of which can be found in this recipe for two-ingredient Nutella brownies) or caramel or chocolate, which should obviously be injected straight into your mouth. 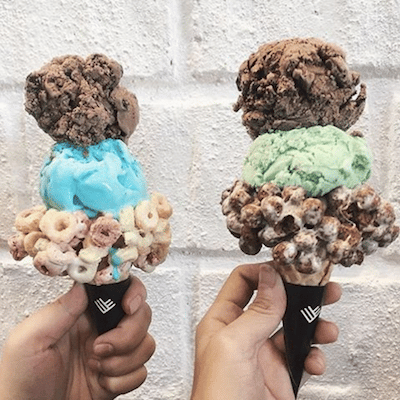 If ice-cream has cereal on it, does that mean it counts as breakfast? The answer is yes, and you can try it for yourself at this one-of-a-kind eatery that’s known for mixing foods that wouldn’t usually go together.

8. Amorino, all over Europe and some boutiques across the USA 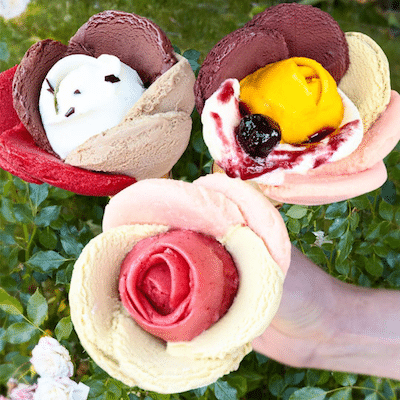 Sometimes you just want to eat something that looks pretty – like artisanal gelato shaped like a beautiful rose. You can have one flavor or two, or even four – the more you choose, the more colors in the flower. 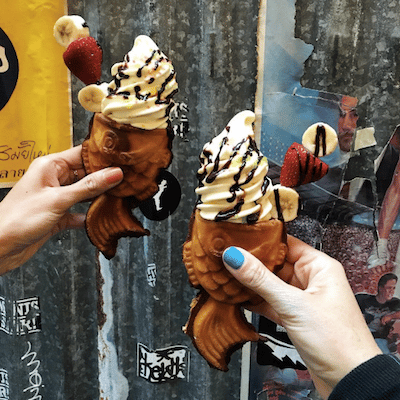 Ice-cream in an animal-shaped cone is instantly better than any other ice-cream. Especially when that animal is an adorable waffle-cone puffer fish. These novelty ice-creams are equal parts yummy and Instagrammable. 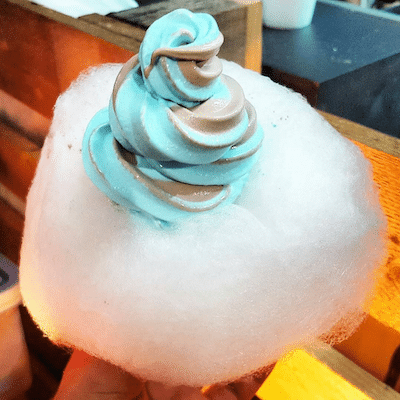 This two-flavor twist of gelato served on a cotton-candy cloud is the thing you didn’t know was missing from your life. It’s almost like it’s floating towards you in one of those sugar-filled dreams you always have. 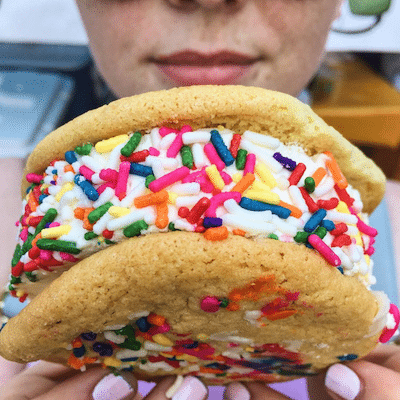 This Birthday Cake Ice-Cream Sandwich is proof that rainbow sprinkles make everything better. So even though you don’t have to wait until it’s your special day to eat it, once you sink your teeth into this beauty, it’ll feel better than any birthday you’ve had. 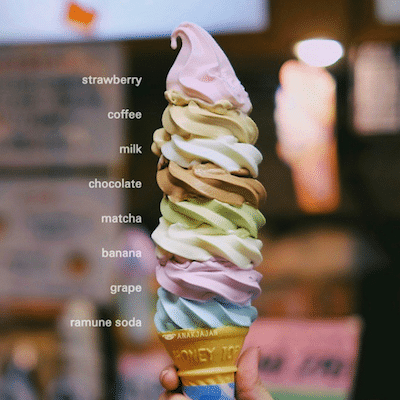 This is probably the tallest ice-cream in a cone you’ll ever see. It is absolutely perfect for those of us who have ever thought ‘I could really eat eight ice-cream flavors in one sitting’. 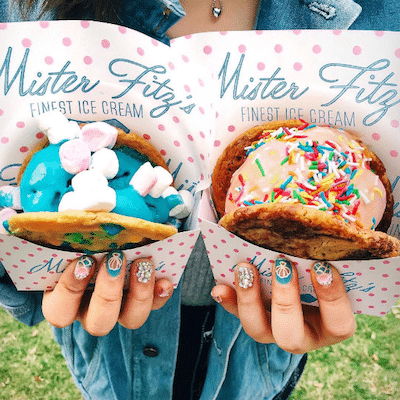 Not only is this ice-cream parlor gorgeous and pink, but the ice-creams that come out of it are gorgeous. And colorful. And you can make your own unique creation by choosing your fave cookie, ice-cream flavor and toppings. Oh, and they’re huge. They are practically perfect in every way. 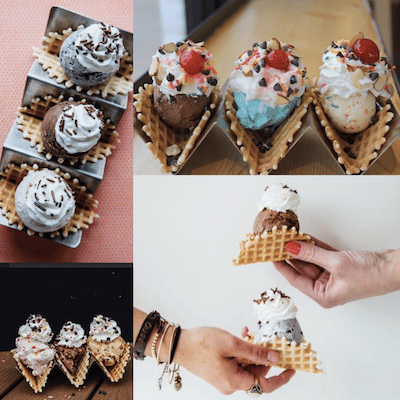 Two words: ice-cream taco. Have you ever seen anything so beautiful? Nuggs even does Taco Tuesday. What a time to be alive! 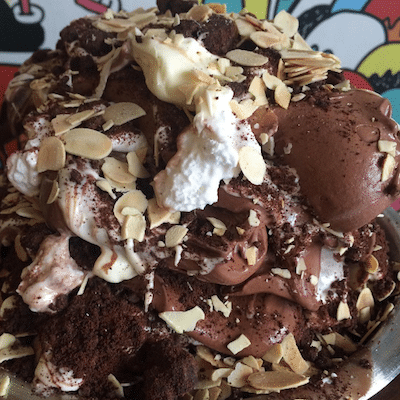 An Australian institution, Gelato Messina is the gelato parlor dreams are made of. Just imagine chocolate gelato with chocolate biscuits, whipped cream, marshmallow spread and toasted almonds. It’s enough to make you pray to the chocolate gods and thank them for all they have done for humankind. 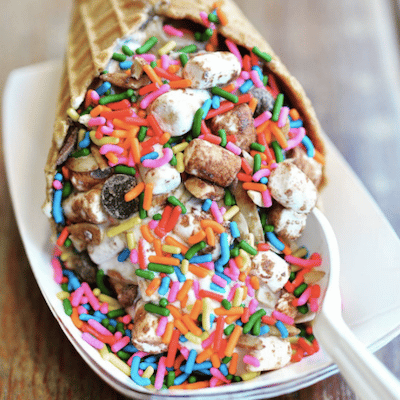 First, this place gets points for such an awesome name. Second, all of its ice-creams are inventive flavors with hilarious names and topping combinations. And, lastly, they all look amazing.

Comment: Have we missed your fave place? Tell us in the comments.