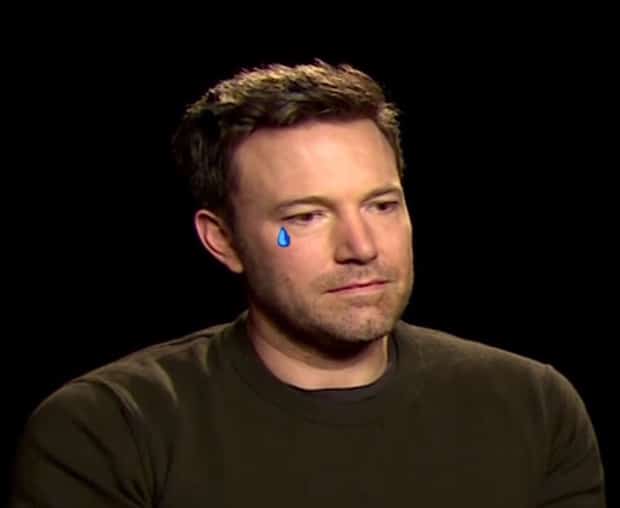 Just don’t feel sorry for him while you’re watching it.

If you went offline for the weekend, you may have missed one of the greatest viral videos to come out of 2016.

‘Sad Affleck’, which is literally a one minute vid of actor Ben Affleck sadly staring down at the floor to the musical track of Simon & Garfunkel’s Sound Of Silence after being asked if the bad reviews of his latest movie, Batman v Superman: Dawn Of Justice have affected him, has already pulled in more than 17 million views on YouTube.

It’s amazing what a bit of video editing can do. In this case, replacing the original sound with a gloomy song while zooming in on the devastated looking Affleck was enough to entertain the whole world, but it also sparked a variety of articles defending the actor, with many arguing why we shouldn’t make fun of him.

When I watched the video, I laughed a lot and I didn’t – and still don’t – feel sorry for Ben Affleck whatsoever. Now before you call me a heartless bitch, consider this: Ben Affleck is one of the most successful actors of the 21st century. He has played leading roles in 27 of the 44 movies in which he’s starred. He won his first Oscar in 1998 for his screenplay of Good Will Hunting, and his second Oscar in 2013 for his movie Argo, which he directed. He earns up to $15 million for each blockbuster he plays a part in and is currently signed for six movies, all to be released over the next three years.

But the most important reason I don’t feel bad for ‘Sad Ben Affleck’ is that Batman v Superman, regardless of any negative reviews, brought in $420 million on its opening weekend, making it the largest domestic opening for a Warner Bros flick. In other words, Ben Affleck doesn’t have any reason to feel sad, except for maybe the recent downfall of his 10-year marriage to Jennifer Garner. Now that’s a topic I wouldn’t laugh about.

For all I know, Affleck’s heartbroken look in the viral video might not even have had anything to do with what the reporter asked. This might have been his 25th interview that day and he may have simply zoned out for a while and remembered he forgot to record a football game.

Whatever it is that made Affleck react this way, it did make for a hilarious video, which ultimately created more buzz about his movie than he could ever have asked for. Seriously, don’t feel bad for ‘Sad Ben Affleck’. Just feel entertained…

Images and video via youtube.com and giphy.com.

Comment: Have you seen Batman v Superman? Is it really as bad as everybody is saying it is?