This isn’t a decision I’ve made lightly.

I’ve been a pacifist for as long as I’ve known what a pacifist is. As I’ve gone through different phases, successes and traumas in my life, it’s been one of my only constants. And now I’m getting rid of it.

Deciding to ditch my pacifism wasn’t an easy choice to make. I still believe that violence should always be a last resort. I’ve always understood why some people reacted with violence, and I’ve rarely blamed anyone who used it. I understand that there are some situations where violence is completely appropriate. I’d simply taken a personal vow never to use it unless my life was in immediate danger.

It’s served me well all these years, my vows of pacifism. And of course I acknowledge that being able to be a pacifist without conflict is an extreme privilege. I’m not in a position where I’m likely to be violently challenged on a regular basis. I’m white, and though I’m queer, I’m also straight passing. I live in a liberal city in a liberal state. While being a woman is and of itself swiftly becoming even more of an unsafe thing than it was before, I’m in a pretty good spot.

Then that infamous video reared it’s head. The one of white supremacist Richard Spencer getting punched in the head during an interview. 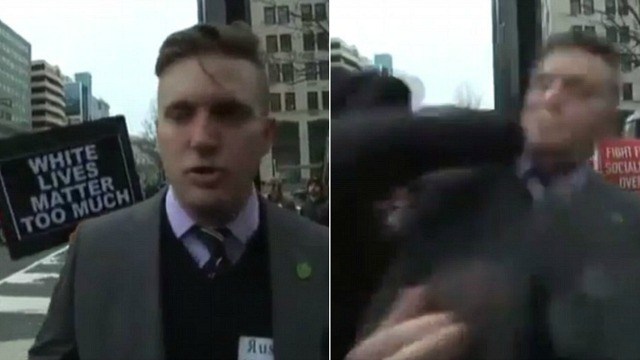 Just to jog your memory in case you’ve forgotten, this is the same man who was spotted leading a conference right after Trump’s election with a Nazi salute followed by a chant of “Hail Trump.” It’s really hard to have sympathy for a guy who got punched in the face for preaching Naziism at a rally about equality.

Or so I thought.

It was amazing to me how many people were bending over backwards to support this guy. I heard a lot of people say that he had the right to speak, the right to say whatever he wanted, the right to preach even the most unspeakable things because the first amendment protected his right to do so. And these people are correct. Spencer can spew whatever garbage he wants from his trash mouth and be free from government action, for now at least. Trump has yet to manage to sign any executive orders allowing for the arrest of people based on their opinions.

What the first amendment doesn’t protect you from, is the reactions of everyone else. You can say whatever you want, and we can interrupt you and refuse to air you and punch you in the face because we think what you said is awful enough that your mother probably should’ve had second thoughts about using a condom on the night of your conception. And sure, punching someone is technically assault, but it’s also an extreme expression. And we live in some pretty extreme times.

All of these conversations made me wonder what I would do. Would I punch a Nazi? If I saw someone standing on a street corner attacking, verbally or physically, someone for being a Jew or not white or any of the other things I never have to worry about being picked on for, what would I do? It was an ethical question that I had to chew on for awhile. My conclusion?

I would absolutely punch a Nazi.

Nazis don’t care about our words or philosophies. They’ve already decided the majority of the world’s population is inferior; lesser. They aren’t going to listen to reason. Their philosophical and political position has been universally considered revolting for decades: they’ve come to agree with this position not because they haven’t had the opportunity to learn better, but despite all of their opportunities to learn better. They’ve made their beds. They’ve chosen the side of Hilteresque evil. I’m not going to waste a second of my life worrying about the hurt feelings of a willing Nazi. Especially in the midst of a political regime that openly enforces their disgusting mindset by banning Muslims from entering the country and tweets openly anti-Semitic images.

So it’s time to take off my cape. Gone are the vestiges of my moral superiority. I understand getting my knuckles dirty may well cheapen my ethical position. But in 10, 20, 30 years, I’ll get to look back on my life and know I did everything I could to fight off this nauseating wave of Naziism in my country. I’ll know I didn’t choose to take the safe route of the privileged. And I won’t regret it.

Comment: Where do you stand on Richard Spencer’s extreme views?