What I Did When I Inherited A 3,000-Piece Vintage Fashion Collection

I knew this was something special.

When I inherited my godmother, Doris Darnell’s collection, 14 years ago, I wasn’t really into vintage fashion.

The thought of wearing someone else’s old clothes honestly kind of creeped me out.

It wasn’t until I received the entire 3,000-piece collection that I realized vintage doesn’t necessarily mean dirty, moldy, or drab.

I’ve always been interested in textiles, history, how style is reflected in different countries, and other people’s stories – when they wore a certain garment, what it represented to them, and what was going on in their life at the time. It’s probably because I grew up with elderly relatives around me that I developed a love of storytelling and reminiscing about the past.

Before the collection arrived, I ran a shop selling French and English antiques. But when I heard that my godmother was giving me her collection, it changed everything.

This elegant Irish crocheted lace tea gown is by Cincinnati designer Anna Dunlevy. Anna had no formal fashion training but built a mini fashion empire at the turn of the 20th century and at her peak (during Cincinnati's Golden Age in the early 1900s) employed over 200 seamstresses to help complete her orders. Anna helped reintroduce the art of Irish lace making to impoverished Irish women who had escape the famine in Ireland and had fled with their menfolk only to remain unemployed in Cincinnati. So successful was this initiative that Cincinnati is credited with producing the finest Irish crocheted lace outside of Ireland. @brigittegrantphotography #annadunlevy #cincinnati #americanwomendesigners #irishcrochetlace #fashionhistory #socialhistory #thedarnellcollection #lace #lacemaking #irish #famine #ireland #thegoldenage

Doris was always flamboyant and brave with her outfit choices. She would wear a bustle skirt from the Victorian era, add a pretty little blouse from the Edwardian era, and then she might top it off with a stunning hat with dramatically large feathers in it.

She loved to wear old fashion and have fun with it. People would constantly stop her in the street to comment on her outlandish outfits, and others began to donate pieces to her. Eventually she started asking the donors to tell her a story about the piece that she could share when someone else commented on the clothing. This was her way of treasuring what had belonged to somebody else, and ensuring their story lived on.

Doris was a librarian at an exclusive Quaker school. Thinking back on it, when she decided to organize these stories about fashion and archive them as a historical resource, it makes sense; putting together unexpected looks clashing eras, colors and patterns was more than a way to pass the time for her, it was who she was.

At one point, Doris was approached by the Phoenix Art Museum in Arizona. They wanted some of her really fine pieces to feature on display. She was absolutely thrilled a major museum with an excellent costume collection was interested in her own collection, but in the end, they only wanted the most expensive pieces, and couldn’t guarantee her what would happen to the rest. She was equally attached to each piece, regardless of its monetary value. So she backed off.

The stories behind the dresses were just as important as the dresses themselves. She didn’t want people merely admiring the Diors and the Chanels and leaving behind the label-less garments with rich history.

I knew about the collection before I was approached about taking it on. I’d grown up with it. I remember going to Philadelphia to visit Doris and play dress-up when I was little. Even when I moved overseas, Doris and I stayed in touch, exchanging handwritten letters across the vast oceans to each other.

But, I guess I was so busy in my own life outside of our mail communications, it never dawned on me – put my hand on my heart – it never, ever occurred to me, that I, of all people, would inherit her collection.

I also had no idea how big it was.

When I pulled out the first dress, and certainly by the second, I knew I had inherited something much more magical than polyester housecoats.

There were big green notebooks full of typed pages, buried amongst fur and frills. Every dress I pulled out of a box had a tag corresponding to a beautifully detailed note in the books. It told the story of each garment; what year it was purchased, who owned it, and an anecdote about what happened when she wore the dress.

It was those green books that peaked my interest. I could suddenly imagine what these women looked like. That’s why I illustrated, rather than photographed the pieces for my book, One Enchanted Evening. While I never had the privilege of meeting any of the garments’ original owners like Doris did, nor could I know what exactly what each of these women looked like. my imagination was sparked reading the intricate story behind each of their dresses, and so, I began to draw.

Admittedly not every story is earth shattering, but to look at them now, they turn into nostalgia. For example, one young woman in the 1930s remembered going to a country club dance in Pennsylvania. Her mother bought her a special dress with a long, plunging back to wear to the event, and she was just beside herself with excitement to wear something so sophisticated. All night long at the dance, entranced by the sensuality of her backless gown, young men flirted with her by playfully dropping ice cubes down the back of her dress. Can you imagine? Today, that sounds so ridiculous. 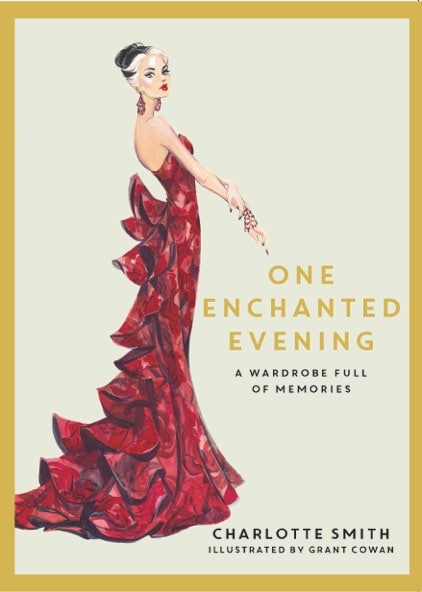 There are definitely some pieces that make my heart beat faster when I see them, even now, not just because they’re extraordinarily beautiful, but because of the sensations and images they evoke when I see them,

Once I realized the gravity of Doris Darnell’s collection and of my inheriting it, I became motivated to turn it into something big. Curating the Darnell Collection has been my full-time job ever since.

Now I’ve grown the collection myself to over 9,000 pieces. It represents every aspect of a woman’s wardrobe, anything you could ever imagine a woman wearing over a 250 year period, right up to yesterday’s catwalk.

I only look at high end fashion couture or haute couture pieces to add to the collection, but the majority are donated to me, just as they were to Doris. I have pieces like a Margiela dress, a Prada skirt, and dresses by Rodarte; purchased by affluent collectors and often only worn once before being given to me. The few pieces I actually buy are usually from indigenous designers around the world. I recently bought something from a Vietnamese designer because I was moved by the enchanting way she combines her heritage with clothing that can be worn in a modern setting.

The oldest pieces I have in my current collection are a 1690s black dress worn by a German bride for her second wedding while she was still in mourning for her first husband who had passed away; and a pair of dancing slippers that would have been worn in the mid-to -ate 1700s. I have quite a few accessories from the early 1800s, too, and then in the 1860s, the garment collection really takes off.

I know Doris dreamed of having a little museum of her collection one day. I’m now working on opening the first museum dedicated to the Darnell collection and its fashion history.

The museum profits will to provide funding for the Darnell Foundation, which provides grants to emerging designers – young fashion and textile designers, milliners, and cobblers who’ve just finished school and not started to manufacture yet. I’ve found that we have many talented young people who graduate, but don’t have the money to get started. They suddenly lose confidence and end up being baristas in their local coffee shop. Their extraordinary talent dies with their dreams. I want to be there for them and keep their confidence.

Despite the passion for preserving historical fashion Doris’s collection ignited within me, I still can’t pull off vintage outfits in the effortlessly off-beat way my godmother did. But I like to think that when I do throw on an old scarf or 1950s frock today, I’m spreading a bit more of her story, and the stories of the women she treasured in each piece, with the people who stop me on the street to comment on my outfit; just the way they did when Doris was alive.

Charlotte Smith is the curator of the Darnell Collection and author of three books. Her latest is One Enchanted Evening. As told to Josie Gleave.