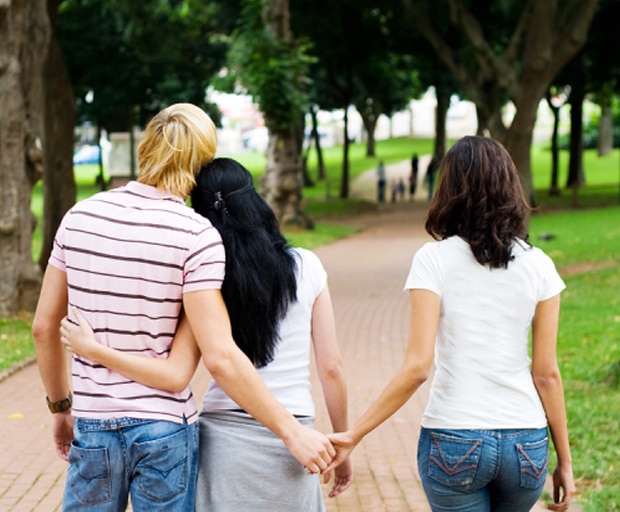 You Asked: Should I Leave My Husband?

Does being in love excuse the inexcusable?

My adorable girlfriend Jane* had been single for an agonising four and a quarter years. We were counting the months like children count their age. It was possibly the longest dry spell ever known to man. Or woman. It didn’t make sense – Jane is gorgeous, funny, and I’d rather spend an evening with her than watch reality TV. This is rare.

She waltzed through my front door with a smile that wrapped around her entire head like a bandage of sunshine and a spring in her step that Bindi Irwin would be proud of.

“I’ve met a guy,” she gushed, tripping over her sunshine bandage with her super springy step. I knew that was coming. As she revealed all, her new man Mick seemed to be ticking all the boxes; right age, good job and his Facebook profile photo got my thumbs up. Then came the clanger – he was married.

Many people, maybe even most people, would have entertained that this could be a fling. The advice would have gone along the lines of, “Have some fun but don’t get attached”. Not me. This was conclusively Mr Wrong.

I’m flexible about most things relationship related, from threesomes to f*ck buddies, but it is absolutely never ok to date a married man in my book. Any woman who enters into an affair is no friend of mine. Call me when it’s over, but I won’t be bringing tea or sympathy.

Does that sound harsh? It’s because the after-effects of an affair are brutal.

My dad had an affair and walked out on his young family when I was three. I know the emotional scars it leaves behind on a wife who is in love with her husband and the long-lasting damage it does to a child who is abandoned. It is never excusable. You are yanking a white picket from the fence outside a marital home and stabbing another woman in the back with it. Having an affair is the ultimate betrayal of sisterhood and you are playing a treacherous game with karma. The same goes for dating a man who has a pregnant partner.

Reading Hollywood actress Claire Danes talk this week about her relationship with Billy Crudup made me feel sick. Crudup had been dating Mary Louise Parker for eight years and was pregnant when he met Danes on the set of Stage Beauty. He broke up with Mary Louise while she was seven months pregnant. Seven months.

“I was just in love with him,” Danes reflected on Monday.

My eyes widened and brow furrowed as I read it.

That was enough, I actually couldn’t read on. Romeo and Juliet obviously went to her head.

In the land of normal human beings, it is rule number one that you check a man’s ring finger before ever making a move on him or letting him make a move on you. That weeds out the first pack of cheaters. In the LaLa land of celebrities, if you actually KNOW that the object of your lust is dating a pregnant woman, you walk away. No ifs, no buts, no maybes. You walk away before any bubbling lust has a chance to turn into love.

Unlike Danes, you don’t ‘explore’ destroying someone else’s relationship or the life of a pregnant partner and unborn child. Who do you think you are?!

I’m sure some will read this and say, ‘He was the one who was in a relationship, it’s his fault’. I couldn’t disagree more. In life, every human being should have some moral boundaries that are absolutely non-negotiable under any circumstances. Not exploring potential mates who are unavailable is one of mine.

My friend Jane chose not to ‘explore’ any further. She had a prick of conscience before a prick of anything else. A few months later she met her Mr Right and now lives happily with her own little, expanding family. Mr Wrong, of course, we later found out had an affair with someone else he worked with and left his wife. Then he repeated the cycle.

A lucky escape for Jane – both from Mr Wrong, and karma.