Being An Operating Theatre Nurse Is Traumatic, And Incredible

After leaving college as a nursing graduate, I thought I was going to change the world, one medication and dressing change at a time. Then I became a theatre nurse and learned surgery is nothing like Gray’s Anatomy, apart from the scrubs and sexual tension.

Nursing is far from sexy. In the surgical theatre especially, we are daggy, sleep deprived, coffee-driven zombies who spend most of our day counting instruments and trying to anticipate what doctors want a split second before they do.

We see so much pain during our day it tends to become a bit of a blur. But there are certain patients we remember; people we refer to as ‘frequent flyers’. They come in so regularly for surgery – typically for cancer or a severe trauma – that we begin to know them by name, which makes our jobs all the more heartbreaking, because we know there’s typically nothing we can do to make their lives the same again, or even comfortable.

Out in the world when you say goodbye, you say, “See you later”. But to our patients, especially these frequent flyers, we always say, “It was nice to see you, but I never want to see you again”. It’s heartbreaking to know that despite hours of surgery, sometimes we just can’t save them.

Theatres are extremely stressful places for extended periods of time. It’s human nature that emotions run high in such tense situations. These emotions are usually manifested in polar ends of the spectrum; there’s either sexual tension so thick you could cut it with a knife, or bullying and aggression so brutal I’ve seen grown men and women have breakdowns mid-surgery and have to leave the theatre before their tears contaminate the sterile field.

Theatre nurses and surgeons complain about not being able to pee, or eat or drink. But I’ve experienced things which I believe are much worse.

Standing in the same position in a space the size of an A4 piece of paper all day gives you crippling foot pain no amount of expensive shoes can fix. I wake up every morning with pain so debilitating I hobble around like an old lady with arthritis for hours. High heels, which used to be my life, have become a device of torture, and near impossible to wear if standing up. As well as not being able to pee when I need to, which often means foregoing water for hours at a time to avoid getting the urge, I can’t simply go to the toilet to change a tampon or put one in if I get my period mid-surgery (it’s happened). So it has to just sit there, staining through my scrubs while I silently pray no one notices. 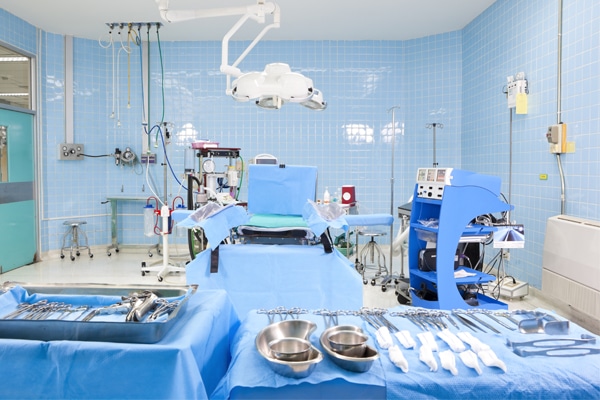 There are other far more disturbing elements to working in an operating theatre, too. Things the general public aren’t aware of, things I never dreamed I’d be experiencing when I first stepped foot in nursing college.

I’ve held amputated limbs in my hands. Watched them detach from the bodies of people I was just hours earlier making small talk with and then stared in horror as they were placed into my outstretched arms, knowing they’d never be a part of that person again.

You never forget your first amputation. Mine was the leg of a young male patient. There was blood, muscle and skin everywhere as it came away from his body, then the limb was handed to me with the same ease you’d flop a folder of paperwork into a colleague’s hands. Only it wasn’t a folder of paperwork. It was a part of a person. A functional human’s leg. And I was standing there holding it in my hands, preparing to dispose of it like it was a piece of trivial rubbish. I had nightmares about it for months afterwards.

I’ve also witnessed rampant sexual harassment inside the insular world of the operating theatre. Being locked in a confined space for hours at a time means I’m forced to listen to whatever the most senior person in the room wants to talk about, and it’s rarely a comfortable topic. Most of the senior staff are older male surgeons with wildly outdated, sexist, racist attitudes that often permeate the theatre.

There are few nurses who haven’t at some point considered throwing in the towel and walking away. The medical world is unlike many others; a bit like Vegas, it’s assumed knowledge that what goes on in the operating theatre, stays in the operating theatre. For that reason, nothing really prepares you for the brutality of the job; be it the long hours, starvation and dehydration or the shocking things you often bear witness to.

But despite its many challenges, there’s nothing quite as satisfying as knowing I’ve played a role in helping to make a person’s life better, and often times longer. Whether that be assisting to deliver a baby into the world via a caesarian section, or getting to be the one to pull a life-threatening cancer from someone’s body. And for that reason, there are also few of us who’d trade our experiences for anything in the world.

Comment: Do you think nurses require better support and conditions?