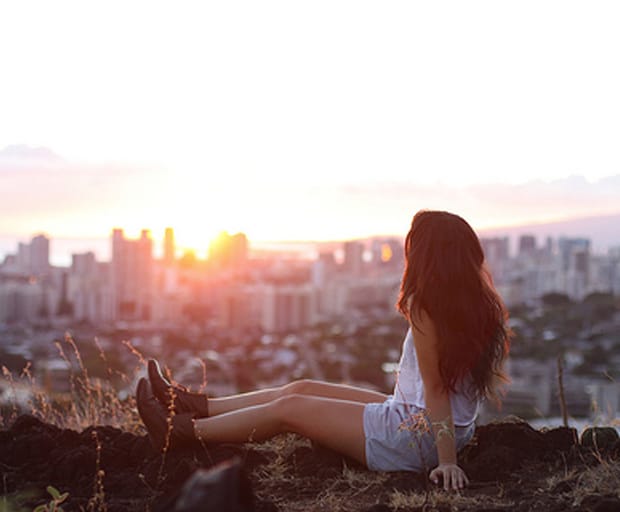 Because you only get one shot at life.

Starting over is hard to do. It’s scary to change up our lives, even when we’re completely miserable with them. When I was in my mid-twenties, I worked a truly terrible office job that didn’t always pay me on time – if at all – and had a boss that was emotionally abusive. But I stayed there for three years because I was scared to learn the answers to the questions plaguing my mind. What if the next job was worse? What if I quit and couldn’t find work? Sometimes the devil you know is the only kind of comfort you can imagine.

It happens with relationships too. You know you’re in a bad place, you know you need to get out, but you don’t. And you may feed yourself a lot of excuses, but at the end of the day, most of them are going to boil down to one fact – change is scary. But if we ever want to be anywhere other than where we are, it’s absolutely necessary.

I had to hit rock bottom before I embraced change. After that awful job, I got a couple of other jobs that were less awful in some ways and more awful in others. The pay was good and steady but the work was slowly syphoning away my soul. I hated what I did and who I did it for, and after a few years, the money alone couldn’t justify the work I was doing.

It probably didn’t help that other areas of my life were swirling down the toilet as well. I’d just gotten out of a bad relationship. Or, well, I’d been dumped. To say I got out of it is to ascribe more willingness to change than I was actively ascribing to at that point in my life. I should have broken it off months before she did, but I was too afraid to. If I just clung onto it, surely things would get better – magically, with the power of love, all on my own without any input from the other party.

I’d dropped out of college. And while college certainly isn’t for everyone, I’d really wanted to finish it. My reasons were mental and financial. I couldn’t afford school and I didn’t know what I wanted my degree in, leaving me feeling like I was wasting both time and money that I didn’t have.

All those piled on me with enough force that I eventually broke. I needed change, major change. I was always a woman with a plan, and not having one frightened me, but maybe what I needed was to be scared. I remembered being a kid, a time when I was fearless and tried new things all the time. Tricks on my bike, exploring the wilderness by my house, making new friends by doing nothing more than walking up and talking to someone. It all came down to embracing the idea that I might fail, that I might get hurt, but the payoff was worth the risk.

At that point in my life, the payoff was certainly worth the risk.

I quit work. With no other job lined up, I walked away. I picked up some freelance writing work online, but realistically it wasn’t enough to pay the bills. I went back to school full-time, partly on scholarship and partly on loans. I was extremely poor. It was not easy.

But it was worth it. I graduated this semester at long last, a process that took me 14 years from start to finish. I have a career that’s very different now and far more fulfilling. I love myself a lot more than I did in my mid-twenties, whether I’m rich or poor.

When I was in highschool I was given the impression that my life had to follow one path. I could choose what path that was – accountant, lawyer, doctor, computer programmer – but I had to be smart early on. I had to make sure I chose the right one, because that was going to be who I was forever. And it’s just not true. It’s never too late to start your life over again if you don’t like where you ended up.

Images via flickr.com and giphy.com.

Comment: Have you ever taken a huge risk in your life that really paid off?