Isabelle Gillespie
May 8, 2016
NEXT STORY

When life gives you lemons, you make a revenge album.

Or at least that’s the case with 46 year-old rapper, Jay Z.

After his wife, Beyoncé surprised the world back in April with her 60 minute visual album, Lemonade, Jay Z has been in some seriously hot water. The critically acclaimed album raised a whole lot of eyebrows with its controversial lyrics, which had fans convinced Bey was hinting at her long-time boo having had an affair.

With lines such as “This is your final warning. You know I give you life. If you try this shit again, you gon’ lose your wife” and the now notorious lyrics, “He better call Becky with the good hair,” along with heartfelt songs that take the audience on a journey of mistrust, betrayal and reconciliation, the album has turned fans into armchair marital detectives, determined to get to the bottom of Jay Z’s alleged infidelity, with conspiracy theories involving everyone from singer Rita Ora (who let everybody know she ain’t “Becky with the good hair” at this year’s Met Gala) to fashion designer, Rachel Roy, who infamously stirred the pot by captioning an Instagram post (which was later deleted): ‘Good hair don’t care’ before vehemently denying any connection to the affair speculation, telling People magazine, “There is no validity to the idea that the song references me personally.” 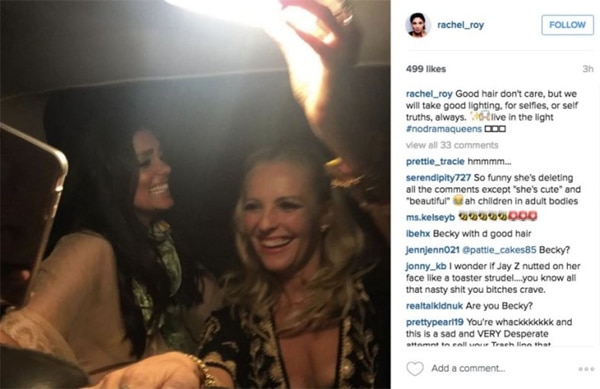 But personal in nature or not, now it seems Jay Z will be the one having the final say. An insider, who is reportedly close to the power couple, told US Weekly the rapper is now “working on an album telling his side of things.”

Although Jay Z has been supportive of Bey’s album – he even appeared in its video footage – the king of hip hop hasn’t yet confirmed whether the controversial lyrics are actually autobiographical, or just a genius publicity stunt. In the meantime, the world is continuing to weigh in; including Queen B’s father and former manager, Mathew Knowles, who recently declared his stance on the issue.

“People want to make it about her… Maybe she dug deep and made it about something we all could relate to.”

Miss Tina, aka Beyoncé’s mother, also cleared the air when speaking to ABC13, suggesting the album was not specifically about the power couple’s relationship.

“People make it all about the cheating and betrayal and, yes, that’s a part of it because that is something you have to heal from… If you really listen to the poetry it is one of hope and redemption and hopefully that can be healing for people.”

Despite similar sentiments from critics agreeing the album is nothing more than a publicity move, Jay Z is continuing to cop it from Queen B fans around the world, so we can totally understand why he’d want to put out a response of his own to clear the air. Only time will tell what the truth is…

Comment: Do you think Beyonce’s Lemonade is a story about Jay Z’s infidelity, or just a really good publicity stunt?