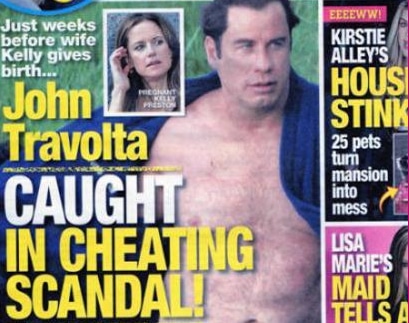 It couldn’t come at a worse time, with his wife expecting a baby this year, but John Travolta has been confronted head on over reports he’s been enjoying secret gay sauna sex for years.

Robert Randolph, author of the memoir, You’ll Never Spa in This Town Again, claims Travolta has been cheating on wife Kelly Preston for years by engaging in “lewd sex acts with other men” as part of a “secret gay spa subculture.”

“When the details emerge, he’s gonna make Tiger Woods look like a boy scout,” claims Randolph, who has apparently passed a lie detector test over his allegations.

“He came on to me a number of times,” says Randolph. “I always turned him down. But there was always some guy who was willing to have sex with him.

“He blatantly cruises guys, and doesn’t seem to care who sees him. I saw him with his lover and he couldn’t get enough.”

This latest report only fuels rumours that have been circulating for years that Travolta is gay, despite being married to Preston for 19 years.

What do you think? Could you believe that John Travolta has been living a double life or that wife Kelly Preston even knows about it?