We’ve all been there: you’re in love and want to tell the world. Naturally, that means posting your new partner’s picture all over your Instagram, Facebook, Twitter, Snapchat, etc. It’s what we do, right? Nothing wrong with that.

But if your new girlfriend is the 17-year-old daughter of a celebrity, your ex-girlfriend is Selena Gomez, and you’ve got legions of fans watching your every move, you might want to think twice.

After threatening to deactivate his Instagram account over criticism of his new boo, Justin Bieber followed through early this morning, disappearing from the social media site and leaving his 77 million followers in the dust.

The drama started when the Biebs got fed up with fans hating on his new love, Sofia Richie. Richie is 17, a model, and the daughter of singer Lionel Richie – three too-easy reasons for fans to get snarky. 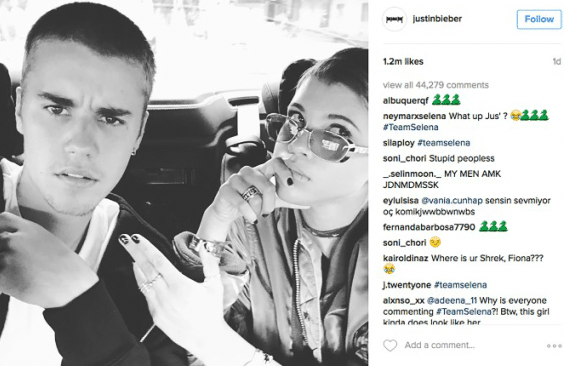 “I’m gonna make my Instagram private if you guys don’t stop the hate,” he posted over the weekend, underneath a photo of the couple. “This is getting out of hand, if you guys are really fans you wouldn’t be so mean to people that I like.”

Among the hundreds of thousands of comments this solicited was one from the singer’s former flame, Selena Gomez. “If you can’t handle the hate, then stop posting pictures of your girlfriend lol – It should be special between you two only,” said Gomez. “Don’t be mad at your fans. They love you. They were there for you before anyone.”

“It’s funny to see people that used me for attention and still try to point the finger this way. Sad. All love.”

From there, it got even uglier, with Gomez accusing Bieber of cheating during their two-year relationship.

“Funny how the ones that cheated multiple times, are pointing the finger at the ones that were forgiving and supportive, no wonder fans are mad. Sad. All love.”

But apparently Bieber harbors some anger of his own over his ex’s behavior with One Direction’s Zayn Malik. He bit back: “I cheated… Oh I forgot about You and Zayn?”

Gomez apparently felt bad after that, posting this message on her Snapchat: “What I said was selfish and pointless.”

me waking up this morning for more justin drama and finding out he deleted his instagram ? #justindeactivatedparty pic.twitter.com/pDgtafg1DU

Comment: Have you ever gotten into a fight with an ex on social media?