Just when you thought Kanye West had exhausted his Twitter resources, he ups the ante once more. Following his bizarre plea to Mark Zuckerberg to give him $1 billion, his latest social-media tirade is directed at none other than the Grammys.

Yep, the Grammys. Not even a human. In addition to his controversial experience with this year’s awards show via Taylor Swift throwing him some serious shade, Kanye has aired his views about the Grammys being culturally irrelevant, and in need of a do-over. 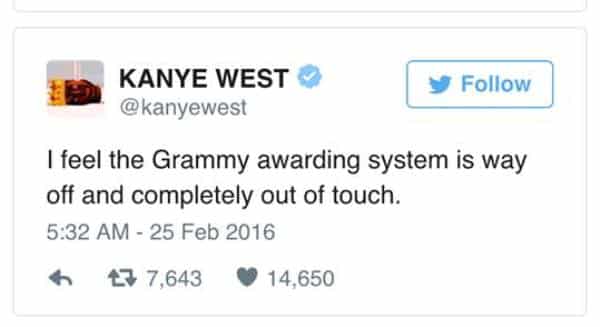 On a more serious note, he’s accused the awards show of racism. He named a number of “black” artists who were ignored by the awards show; pretty poignant considering some stars boycotted the Oscars this year because of the lack of diversity in nominations. 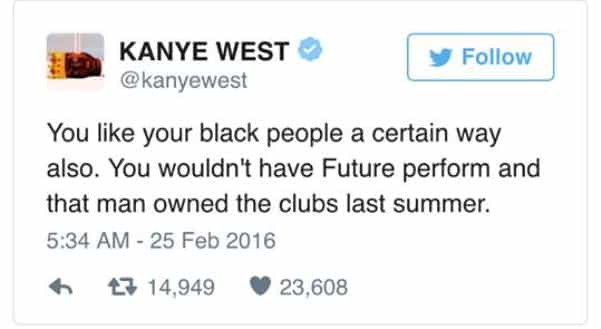 “First order of business. We the people need to see Future at the Grammys,” Kanye tweeted.

“We need to see Young Thug at the Grammys. Not just me and Jay [Z] in a suit. I don’t want to just fix the awards for me but I want to fix it for Dexter Navy who directed A$AP Rocky’s LSD video.”

However, as Azealia Banks pointed out, his rant about racism wasn’t actually all that inclusive

“Kanye West didn’t mention a single female artist in his rant about the Grammys,” she tweeted.

“The black female rap artists deserve to be fought for too! Don’t leave us out. We’re just as relevant and important to the culture!!!”

Might wanna watch it with the chauvinism there, Kanye.

But Kanye’s not just hurling insults – he’s also taken a strong stance on self-esteem. Check out this guy’s self-confidence. 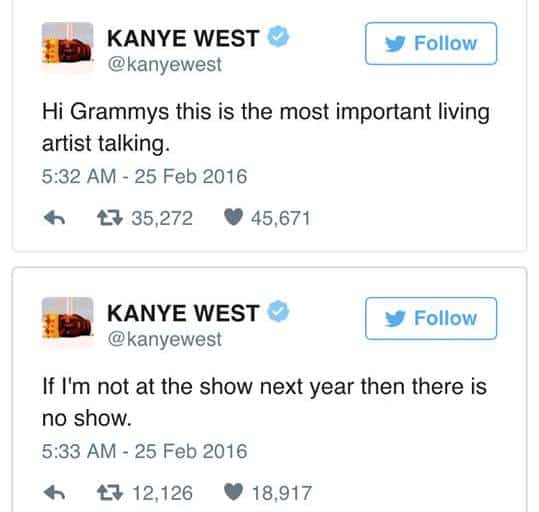 He’s also addressing all the big issues, like freedom of speech. 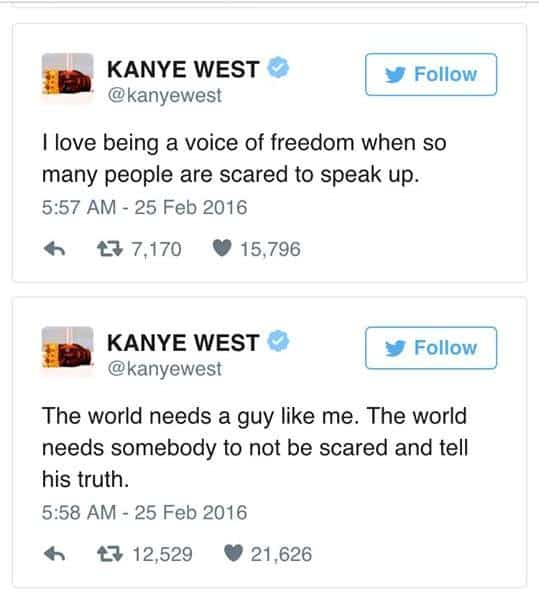 But hey, at least there was a great message of gratitude, serenity and optimism embedded (somewhere) in the rant.

Look, Kanye, we get it – you like speaking your mind and you like social media. In isolation, both of those things are fine, but put them together and you get a lethal cocktail of super-charged Twitter rants permeating everyone’s feeds for several days. So please, for once, would you turn off your smartphone and give us all a break?

Comment: What are your thoughts on Kanye? Is he right? Do you love him or hate him?