Artist Katharina Stenbeck On Why Feminism Needs To Be Intersectional

What does being a woman mean to you?

Stenbeck carries this motif through her art and her views on intersectional feminism is a welcome expression of diversity and inclusiveness.

“Right now, I think it’s really important to make sure that our feminism encompasses all women, including women of color, trans-women and queer women. We’re all in this together.

Without diversity in our lives and in positions of power, we continue to live in our own self-affirming bubbles and in a dangerous status quo. Embracing diversity is embracing life.”

This empowerment sees Stenbeck as a beacon of strength and it seems there is nothing she can’t do.

Stenbeck’s journey as an artist has been anything but linear, full of twists and turns as creatively charged as she is.

You just have to take one look at Stenbeck’s YouTube channel to discover a woman of many talents.

Feminism is a prominent theme throughout most of Stenbeck’s work and she credits Sweden’s progressive attitudes toward gender equality for empowering her to stand up about women’s rights.

“I think growing up in Sweden, where gender equality policies are generally a lot more progressive than many other countries, has shaped me a lot. There’s no closing that door once it’s been opened in you. When painting or designing, I love marrying a folk art aesthetic with motifs that promote tolerance and inclusivity, making the work positive and accessible but still powerful.”

To say that Stenbeck is diverse in her art making practice would be an understatement. Dabbling in fine art, theatre, music and performance, she is somewhat of a creative prodigy.

“I feel like my roots in theatre very much inform my other mediums. I still love working with my body, both as a tool (when working with my hands to create paintings, sculptures or other hands-on projects) and as a subject (when performing live or appearing in my music videos). I still love that direct connection with an audience that theatre provides, and I really appreciate finding ways to create that same dynamic in my other art forms.”

I find that I have phases when I’m drawn to a specific project in one medium and then, once completed, I feel drawn to another project, perhaps in a different medium. It ebbs and flows. I worked a lot on music production, music videos and live performances these last two years, in relation to the launch of my first solo project, Galleriet. Now I’m finding myself drawn to painting, sewing, woodworking and design.”

Galleriet is an ethereal musical project that is equal parts emotional and eclectic. As the frontwoman of her own band, Stenbeck explores concepts of loss, death and time. Her single “Send Me Your Daughter‘ is a perfect example of how music can be used as an outlet to release and recover.

“While writing the EP, someone dear to me passed away. She was a teacher and a mentor who touched many lives, mine included, and her sudden passing came as a shock. She was much too young to go and her passing left me with a flux of emotions.

As a whole, the song isn’t directed at any one person. The song grew to mean a lot to me, so it felt natural to let the EP take its name.”

Given her immense talent, you might be surprised to find that she didn’t always want to be an artist.

“I don’t think I knew that you could be “an artist” back then. I probably knew what an artist was, but I think it was much too abstract for me at that time. I wanted to be an actor/performer of some kind and started taking theatre lessons as a preteen. I also considered becoming a vet or an archeologist, but upon realizing there’d be a lot of math involved in both, my interest quickly waned!”

After graduating from a  performing arts high school in Stockholm, Stenbeck was drawn to moving abroad to pursue her interest in theatre styles. Having been schooled in England for a portion of her childhood, living in London sparked the notion of the “big wide world” that was out there – and she was hungry to see more of it.

Where better to pursue a career in the arts than New York City?

“I’d been to New York City on vacation with my family many years earlier and had fallen madly in love with that place. Everything about it spoke to me. I decided to audition for the American Academy of Dramatic Arts in Manhattan and got in, so I moved to New York at 18.”

Stenbeck spent 10 years in New York before picking up and moving to Ojai, where she currently resides

“Since moving to the US, my roots in theatre have morphed into a lot of different projects in other mediums, like fronting a rock band, creating wearable art for the stage, and painting. Over time, I left traditional acting behind as I grew more interested in a mixture of music, fine art and performance art.

Despite living in America for over a decade, she still maintains a heartfelt connection to her Swedish roots.

“I feel like a Swedish-American hybrid. I’m still Swedish at the core and that identity is very important to me – but there are definitely aspects of my personality that I feel might be considered more “American” too. Like the ease of communicating with a stranger that you encounter at a bus stop, in an elevator or during checkout in a store… Us Swedes are generally not much for opening up conversation with a complete stranger, but I really enjoy connecting with folks in that way. ”

I’m currently working on a new project that I’m really excited about! I’ll be launching a brand new online store with my own design line (totes, pillows, candle holders, and more) very soon. It’s the first time I’m designing my own pieces from scratch and also creating most of the pieces by hand.”

Stenbeck is currently building a new shop where she’ll be selling pieces such as this all-inclusive tote bag. Stenbeck explains the reason behind her designs is her passion for representation. 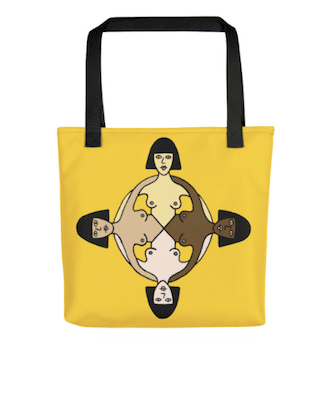 “My ‘Boob Circle’ motif, with a group of diverse women holding each other to form a circle of unity, summarizes many aspects of who I am as an artist and what I believe in. I definitely think that art can empower and inspire. It means the world to me when I create something that someone else wants to support and get behind. That sense of community and dialogue between the artist and the audience is what it’s all about.”

The lovely Katharina Stenbeck leaves me with one final piece of advice.

“Trust yourself and go with your gut. You’re much more powerful than you know.”

Stenbeck’s new shop will be live within the next few weeks and every single item will be hand made with love. She will also be making an appearance at the West Coast Craft Fair in LA on December 7th and 8th this year.