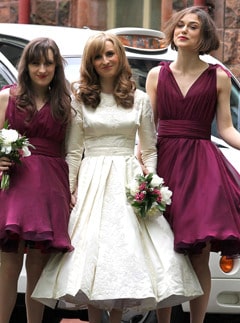 Keira Knightley: “I Was The Worst Bridesmaid In The Entire World”

Keira Knightley might be gorgeous, fashionable and the epitome of English elegance, but she admits she was the world’s worst bridesmaid at her brother’s wedding last month!

The 26 year-old actress looked amazing in her plum dress, one that is already being copied by bridesmaid designers, but says she made a fool of herself when brother Caleb married Kerry Nixon in the Scottish ceremony.

“I don’t normally spill things down myself but every single drink went down that dress,” Knightley said in NY yesterday.

“So I was the worst bridesmaid in the entire world! I’m never going to be asked again.”

So we want to know – share your embarrassing bridesmaid stories below!