The wedding proposal came on Monday – Kardashian’s 33rd birthday – at a party in San Francisco’s AT&T Park baseball stadium in front of family and friends which the rapper rented for the special occasion.

West, 36, presented the reality star with a 15-carat diamond ring, while ‘PLEEEASE MARRY MEEEE!!!’ flashed on the baseball scoreboard screen. Fireworks then exploded and a 50-piece orchestra played Lana Del Rey’s Young And Beautiful followed by his own song Knock You Down. 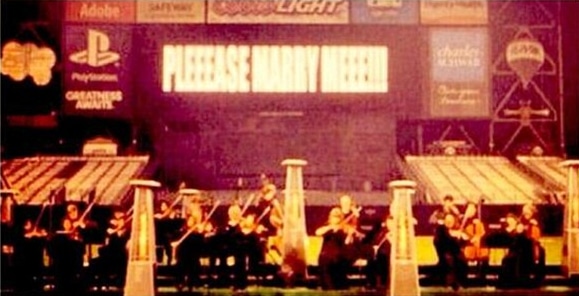 The couple have been dating for 18 months, and their daughter, North, is now four-months-old.

This will be the third marriage for Kardashian, whose first marriage to music producer Damon Thomas ended in 2004, and her divorce following her infamous 2011, 72-day marriage to basketball star Kris Humphries was finalised last June.

What do you think of Kim Kardashian and Kanye West’s engagement?