This is the story of a young woman – passionate, fearless and dangerously curious (with a set of ferocious Jewish parents breathing fire down her neck) – who turned her back on the safety of her suburban life to face probable death in an effort to become the world’s first female Maasai warrior.

Warrior Princess is the hilarious and inspirational memoir of Mindy Budgor, a young entrepreneur tired of corporate life, who decides to make changes in her life. While waiting for her Business School applications to go through, she decides to volunteer – first in India with Muhammad Yunus (Banker to the Poor), and then in Africa building schools and hospitals in the Maasai Mara. While living and working with the Maasai, Mindy talks to the chief and asks him why there are no women Maasai warriors. The chief responds simply and derisively – because women are not strong enough, or brave enough to be warriors. Mindy immediately realises her calling – she gets the chief to agree to train her (and her fellow volunteer) to become Maasai warriors when they return to Africa, and thus begins Mindy’s amazing adventure. 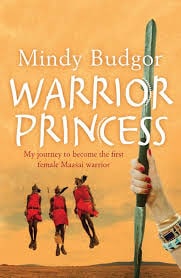 Mindy is now one of the first female Maasai warriors and an official member of the tribe. As a result of their training and advocacy, law in Africa will be changed in 2016 to allow women the right to become Maasai warriors, and Mindy as a tribe member is ready to return to stand with her fellow-warriors against whatever opposition they might face – be it lions, or elephants, or Western-influence.

In her junior year at the University of Wisconsin – Madison, Mindy started her first business, CollegeButler, a concierge service for undergrads. She sold the company several years later and worked at a small sports marketing agency. She also managed early-stage investments for the agency’s CEO. In 2009, after leaving her marketing job, Mindy’s career was at a standstill. Unsure what she wanted to do next, she simultaneously applied to business school and bought a multi-stop plane ticket to Bangladesh and Kenya to explore her interests in social enterprises in developing countries. After completing a two-month microfinance internship in Dhaka, Mindy traveled to Kenya. While volunteering to build a clinic in the Maasai Mara, she met several members of the Maasai, a semi-nomadic tribe, which led to the journey detailed in Warrior Princess. She currently attends the University of Chicago Booth School of Business and is a 2012 MBA candidate.