“I’ve never experienced such blatant discrimination and I’m saddened our daughter had to witness this.”

Australian passenger, Kristina Antoniades was boarding her business class flight from Brisbane to Melbourne with her partner, Merrin and their daughter Lily, when she says she was confronted with “blatant homophobia” by Qantas staff who told the frequent flyer her family would need to be separated in order to accommodate an elderly married couple who wanted to sit together.

“They did not acknowledge that we were a family and wanted to sit together. I argued the point that they should not take priority over our family being seated together,” Antoniades wrote on her Facebook wall this Tuesday.

After some heated discussion with staff, Antoniades was eventually allowed to sit as she’d originally booked.

“Eventually they reissued Merrin with her original boarding pass and we boarded the flight.”

But Antoniades says the discrimination didn’t end there. A couple of hours into the flight, a flight attendant approached the same-sex couple, accusing them of separating the married couple and subsequently demanded to see Merrin’s boarding pass.

“I again advised the flight manager that we were a family and wanted to be seated together. She asked me why I had taken it upon myself to move the wife away from her husband. I advised her that we were in our designated seats,” wrote Antoniades, who says she felt forced to explain the validity of her relationship as a result of the harassment.

“I again told her that Merrin was my partner and Lily our daughter. I told her we had just as much right to be seated together as the married couple.” 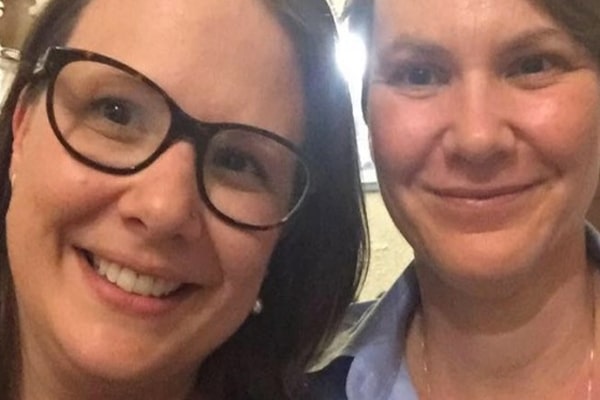 Despite holding their ground and refusing to move, Antoniades says the incident left her humiliated and in tears.

“I have never experienced such blatant discrimination. It was a terrible experience and I’m saddened that our daughter had to witness this…this needed to be acknowledged for what it was; blatant homophobia and discrimination.”

But Qantas are claiming the scuffle was all the result of an “unfortunate misunderstanding”.

“We have been in contact with the passengers to apologize for the situation, where we were faced with two separate groups of customers asking to switch seats to sit together, including an elderly couple,” a Qantas spokeswoman said.

The airline have since offered Antoniades extra Frequent Flyer points as a gesture of goodwill.

Comment: Do you think Antoniades was right to call Qantas out for acting homophobic?