Would You Let Random Men Fund Your Boob Job?

Imagine desperately wanting bigger breasts, but not being able to afford the surgery. You could either save the cash to have the operation done some time in the future, or you could join myfreeimplants.com and have someone else pay for it – and I’m not talking about a loan.

My Free Implants (MFI), which has raised over $13 million since its launch in 2005, lets women accept boob job donations by men they’ve never met before. (Let’s just take a moment to really take that in.)

This is the point where things get interesting, and, to be honest, quite questionable.

For each message received, the women earn one dollar. With a price tag of at least $5000 for a breast augmentation, it would therefore take quite some time to earn enough money, which is why they have other options to get the cash faster, including selling their photos and videos for larger donations. (Read: footage of their bodies, especially their boobs).

Reading through the testimonials, I was quite surprised to find so many seemingly happy women thanking “my friends for making my dream come true”, with some having earned the money in under a month. One 19 year-old girl says she’s extremely grateful to have found the website because the men on there are “older and more mature” and she has “no interest in guys her own age.”

It’s comments like this that suggest MFI isn’t only about the exchange of money for photos, it’s about men getting attention and gratitude from attractive women who are mostly younger than them. While the website calls it “creating lasting friendships”, in reality it borders on being a well-disguised form of pornography. After all, male members can request nude photos or videos of the women and do with them as they please. And once it’s on the internet, it’s there forever. 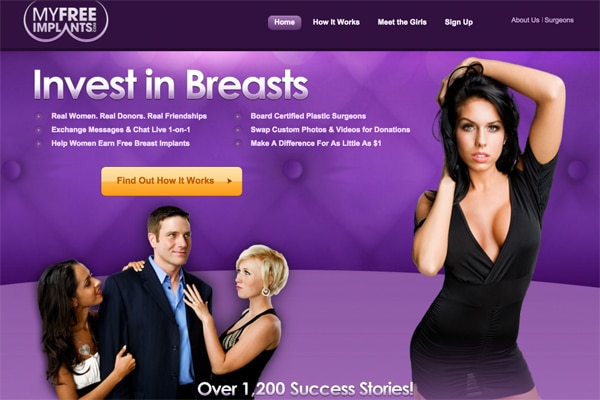 But in the desperate attempt to make money fast, this is something a lot of women wouldn’t even think about, blinded by the seemingly simple way to earn money and tempted by the free prize of cosmetic surgery. Of course, one cannot forget that it’s not just the men wanting attention, but also the women, with some members signing up for a second breast enlargement surgery after experiencing how “easy” it was to get the money for the first one. Lured by the compliments from their benefactors, they think bigger is better.

Besides the moral implications of owing your breasts to complete strangers, the medical aspect of a “free” boob job is just as concerning. Nowhere on the website does it say that a breast augmentation is a procedure that has to be taken seriously just like any other surgery and that there are many risks and possible complications involved.

While this is something a plastic surgeon should discuss in detail with a patient during their consultation, MFI suggests getting a breast enlargement is as easy as buying a new handbag. All you need is money.

I cannot help but think that the surgeons who use the website as a referral source are mainly interested in fast money, above and beyond the wellbeing of their patients. It’s a sentiment echoed by industry professionals.

“My practical advice is that if you have to scrape and save just to pay for a cosmetic surgery procedure, do not do it. What will you do if there are complications and further medical or surgical care is needed? Who would pay for those?” says Memphis based plastic surgeon Dr Aldea.

While it doesn’t happen often, some breast enlargements require revision surgery, which can be just as expensive. I find it hard to imagine that the male members of MFI feel as generous about revisions as they feel about the initial procedures. After all, pictures of deformed breasts aren’t pretty.

But cheap procedures are fraught with health risks. A $5000 breast augmentation is typically not performed in a hospital, but in a private operating room to cut costs, which often lacks the necessary equipment in case of an emergency, as was the case with several patients at Sydney’s The Cosmetic Institute last year, who went into cardiac arrest during breast surgeries performed under general anesthesia without the aid of a licensed anesthesiologist.

Sure, a lot of MFI members have probably achieved what they wanted. But if they think they got it for free thanks to the unbelievable generosity of a few men, then they are fooling themselves. MFI is a website that takes advantage of lonely men and naive women. While some women might be happy with their decision to have somebody else pay for their body confidence, I am certain there is a number of now large-breasted women who regret it, feeling exploited and maybe ashamed.

I’m not judging women for wanting bigger breasts, but there are other ways of getting there than selling your time, attention, and photos to strangers. Especially since any reputable plastic surgery clinic will offer a financing plan. Of course, this means you will have to pay interest, but it’s worth every cent if what you get to keep in return is your dignity.

Comment: Would you let someone else pay for your cosmetic surgery procedure?