This Is What It’s Like Being An Erotica Author

I’ve been writing since I was a teenager, loving the rush of getting my ideas not just out of my head but in print, to be read by the world — or at least, my little part of it. First I penned letters to the editor — everywhere from Vogue to The New York Times to my local paper, The Suburbanite, back in the days before email. Then I moved on to essays, scoring a byline at 19 in The San Francisco Chronicle about being close to my father despite his not always being on time with his child support payments to my mother.

In every type of writing I’ve done, I’ve sought the largest audience possible, whether that meant revealing how hard it was to be the daughter of an alcoholic in PARADE magazine or dishing about my sex life in O, The Oprah Magazine.

I’ve taken that same approach with the over 60 erotica anthologies I’ve edited since 2004, doing everything in my power to reach beyond self-described “erotica readers” toward a broader group — both to increase sales and because I believe there’s far more interest in the genre than the minimal shelf space most bookstores provide would indicate. While I’m fully confident that my chosen genre is as deserving of respect as any other, some moments remind me that, despite the numerous hours and copious funds I put into marketing my books, there are, in fact, readers I don’t want. They’re the kind who send me emails like this one I received recently, which I’m sharing in its entirety: I was reading some of your books, it was great. I feel like jerking off to you. I wish you would let me.

The subject line bore an innocuous “Hello.” I’ll let you guess the gender of the author. 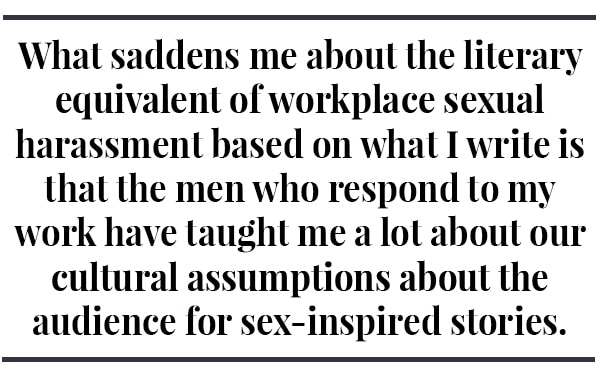 My initial, knee-jerk reaction to the email was a note to self: Don’t engage. But the not-so-subtle p.s. banging away in my mind turned it into: Don’t engage with men. I can already hear the familiar rejoinder: Not all men. Of course, anyone arguing that would be correct — I know because men comprise a significant portion of my newsletter subscribers, attendees at my readings, and students in my writing classes. In the five years I ran a popular New York erotic reading series, In The Flesh, my crowds were mixed in terms of gender, and to the best of my knowledge, I only recall one problematic attendee who my friends and I dubbed “Creepy Guy.” But sometimes you only need one creepy guy to shatter your utopian belief that erotica can enhance and improve lives, not simply stiffen cocks.

What saddens me about the literary equivalent of workplace sexual harassment based on what I write, is that the men who respond to my work have taught me a lot about our cultural assumptions about the audience for sex-inspired stories. Over the past year and a half of organizing readings for a series I edit entitled Best Women’s Erotica of the Year, I’ve received emails from men asking, Is this event just for women? I’ve gotten enough of those that next year when I hit the road again I plan to include these three words in every listing: Open to all.

That openness is precisely the power that the erotic genre holds. It invites readers of all sexual experience levels, backgrounds, genders, sexual orientations, fetishes, and kinks to place themselves in the scenarios on the page. Erotica doesn’t judge them for their turn-ons, and can, in fact, be a refuge from how mainstream society, despite all the strides we’ve made, still categorizes and stereotypes people based on what they do (or want to do) in bed. It’s taught me and continues to teach me invaluable lessons on how to be more open-minded. When authors can humanize topics like caring intimately for a sex doll or having a stocking fetish, they take those subjects out of the realm of cheap laughs and into the heart of what makes us human. I’m a better person for reading erotica because I can no longer separate sexual desires into “us” (things I like and understand) and “them” (things I dislike and can’t wrap my mind around).

I can’t demonize this reader without accepting my own culpability in creating him.

In addition to mining my sexuality for writing fodder, I’ve also played up the role of the sexpot — for example, posing for nude photos, then publishing them in my Village Voice sex column, doing a public boob casting at sex toy shop Shag in Brooklyn, and getting spontaneously spanked by Robin Byrd on her radio show.  I can’t say I regret those actions because I’ve always valued living my life as fully on the page as off. I might not engage in those acts now that I’m in my forties and living a much more sedate, suburban lifestyle, but I relished them in my younger days. I’ve never felt ashamed of my sexual desires or of writing about them, and I refuse to be cowed by those who’d use that openness as a way to attack me.

But I recognize that, most likely, in the mind of that email sender, his words were a compliment, not a reproach. Perhaps they are even a sign that I’ve done my job well, imbuing enough realness into those fictional stories that the line between reality and fantasy blurs. If the definition I use in my writing classes, that erotica means writing intended to arouse, is true, then my work has performed its function — and then some.

It’s a catch-22 of my chosen genre that being successful in my role as an author may, in fact, mean that I, not just my characters, also factor into that arousal.

In the wake of the success of Fifty Shades of Grey, Tom Bissell opined in GQ about his experiences with consuming erotica and the role the reader plays. “To write about sex well, you have to be brave. To read about sex well, though, you have to be honest. You have to be willing to be turned on, and you have to be willing to be disgusted; you also have to understand the difference between being turned on and being disgusted. That’s the nutshell history of censorship: turned-on people claiming to be disgusted.” Perhaps in relegating this reader to the category of “those I don’t want to read my work,” I’m privileging my disgust and instinct to protect my private self from my desire for my words to move people.

I have to live with the dichotomy that while readers like him aren’t necessarily who I’m trying to reach — or at least, his jerking off to me vs. my stories isn’t my aim — it’s a natural byproduct of both my chosen genre and a society that hasn’t quite grappled with its puritanical past. We are still living in a world where erotica, though it’s broken through to the mainstream via E.L. James, is still taboo in many parts of the supposedly libertine United States. I used to pay friends to record my reading series to post the videos on YouTube, only to later receive numerous requests to take them down (all of which I granted), because authors were being harassed or their jobs threatened. I’ve been told by some that they can’t even click “like” on a Facebook page promoting an erotic anthology they’re published in, lest their judgmental neighbors and peers find out. The act of writing erotica can still be used against someone in a custody battle.

All those ongoing taboos butt up against the idea that “sex sells.”

While that mantra may still be true, it’s not such a simple equation. Sexy words may intrigue and may even move books, but they also invite readers into a level of intimacy that’s unintended. That’s a tension I have to ignore when in the act of writing, lest it inhibit my creative process, but once my words are out in the world, I have to accept it. To those who might share similar thoughts as my email sender, I humbly ask: Please keep them to yourself. I actually do want you as a reader — I just don’t need to know where that reading takes you.

This article has been republished from Ravishly.com with full permission. You can view the original article here.

If you liked this story, read more like it on Ravishly: