You know it when you see it, and feel it, but it’s difficult to define as we all have different ideas about what it is and how to get it… until now! New research has revealed exactly what makes Australians happiest. Catching up with good friends (85%), going out with a partner (81%) and spending quality time with family (80%) topped the list of things that made the over 1,000 Australian adults surveyed most happy.

Despite living in an age where social media is credited with connecting people and building closer relationships, nearly half (49%) of Australians are feeling overwhelmed by technology, with the exact same percentage (49%) agreeing that if social media didn’t exist, they’d be more inclined to see their friends in person.

The study by from Australian chocolate cafe, San Churro, found that while the effect social media is having on our relationships is apparent, it’s heartening to reveal that 90% of all Australians believe there’s absolutely no real substitute for meeting friends in person, rendering the glut of connections on social media worthless unless they’re supported by sharing real moments in person.

Further to this, while the nation is lively on social media, with the average person often having hundreds of social media friends, a staggering 39% of the country is feeling more disconnected from people than ever, with young Australians (18 – 24) feeling the isolation most heavily (69%).

Despite being firm believers in sharing real moments with our friends and family, there’s still a fair proportion of Aussies who will invest more time in communicating with their friends and family on social media than in person (39%). Those most guilty for this are women (43%), a nine per cent increase on their male counterparts (34%).

Clinical psychologist at The Happiness Institute, Dr Paula Watkins, believes the research highlights the important role our relationships play in determining our happiness:

“Relationships are key to happiness. When we have family and friends that we love and feel connected to, we are happiest. Relationships need to be nurtured and there is no substitute for coming together in person to build deeper connections.” 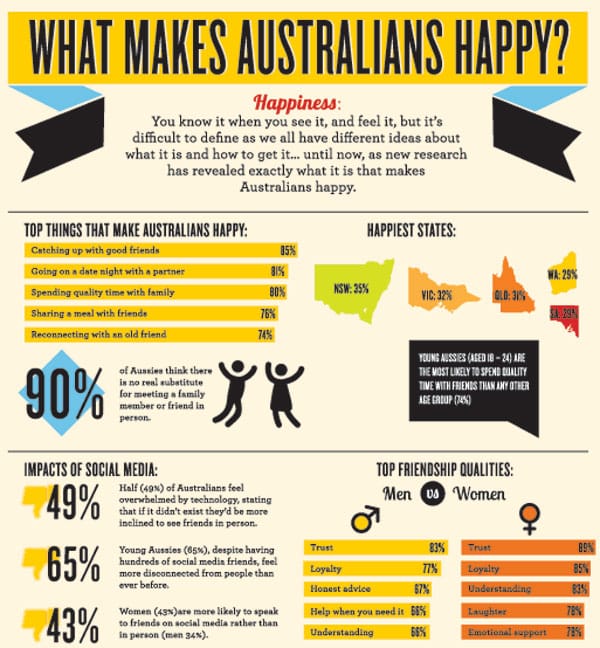