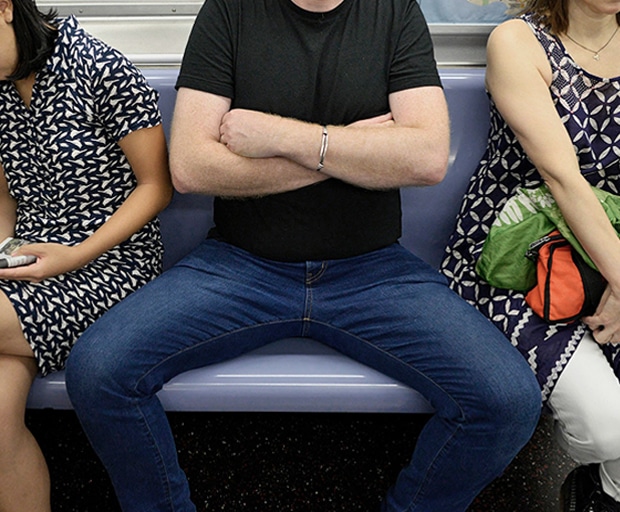 Anyone who’s both not a man and is a frequent rider of public transportation has seen this before.

It’s a crowded rush hour train car during the hottest time of the year. You’re in sweaty work clothes, carrying a bag or brief case and trying desperately to hold on to both your bag and the pole in the middle of the car. The guy next to you is talking loudly on his phone and you’re trying not to get crushed by the mother with a stroller next to you as the train, bus or subway jerks along it’s route.

Lounging in the limited seat area around you is a man. His arms are folded across his chest as he dozes, legs spread impossibly wide. He’s taking up two, maybe even three seats as you struggle to maintain your balance in uncomfortable work pumps.

It happens in every seating area, on every bench, every sofa and shared space in the world. Manspreading is male privilege at it’s finest, and it must be stopped.

The phenomenon of manspreading is the act of any man spreading his legs out so wide he takes up both his space and someone else’s. Like every other arena of life, men seem to think they’re entitled to more than their fare share of the room as their comfort is apparently more important than anything else. I mean, sure, the guy has a seat, but it’s so much more comfortable for him to spread his knees out! His ability to do this is, in his mind, more important than allowing anyone else the opportunity to sit down.

There are a lot of reasons why men feel entitled to this space. The first is because, of course, as men they’re conditioned to not have to worry as much as the rest of us about taking up space. Women, for example, are constantly encouraged to take up as little as possible. We’re supposed to keep our legs closed at the knee, fold our hands in our laps, hunch our shoulders in. We’re also supposed to be quiet, making sure we don’t take up too much sound in the room either. A woman who talks big and has big, assertive ideas is a ball busting bitch. A man doing the same is a leader.

Even Emma Watson can’t give a relevant speech without it being called whining. Men are just too fragile to handle any voices in the world but their own.

But the most common excuse men use for this particular exercise in privilege is it’s impossible for them to keep their legs closed. It’s not impossible — it might be uncomfortable, but it’s certainly not impossible. And I’m assuming this means men have no idea how uncomfortable it is for women to have to do the same while crushed between two guys on a subway. How many times have we sat with sweat-sticky thighs chafing together under a skirt on the train? How nice would it feel to be able to spread ’em a little and let the cool air flow in? It would dry us off so we can walk around the rest of the day without worrying about having a rash the next day?

That would be vulgar, of course. For some mysterious reason when women do things allowable form men it’s vulgar. I wonder what this says about the inherent vulgarity of men as a whole.

A the end of the day the solution is simple. Don’t take up more space than you’re allotted, whether it’s in a conference room or a city bus. Make sure you’re within the bounds of your area and aren’t unnecessarily encroaching on someone else’s. Pay attention to the people around you. Remember you aren’t the only person in the room. Remember other people’s comfort is just as important as yours.

And for the love of cheese, remember to keep your legs closed. There are children present: don’t be vulgar.

Images via reddit.com and mic.com.

Comment: What are your thoughts on manspreading? Is it sexist?

The Men Who Despise Women: Inside The ‘Incel’ Community

Donald Trump Is Being Sued For Child Rape, And The Media’s Ignoring It