“We’re just normal people doing a normal job that has been around for hundreds of years.”

When you think of a sex worker, you probably wouldn’t think of a grandmother – and that’s just the problem.

Our society’s view of sex work is skewed, colored by the stigma that is perpetuated in films and mass media. We tend to automatically assume drug and alcohol abuse is a prerequisite for sex work but Taylor Tara is proving us wrong.

Tara is a 57-year old mother, grandmother, author and sex worker who is as daring as she is determined to break down the stigma we have around sex.

“I started in the industry just on 10 years ago now and it wasn’t long into that I chose to write the book because it was like ‘oh my god’ this is so not what I thought it was.”

“I was never actually interested [in sex work]. Drugs and prostitution always went hand in hand from a movie I watched at a very young age and it put me off both for life because of what I thought you had to do. After my marriage break down I was by myself for about 10 years and I dated a couple of times but it never really worked out. I thought you know what, you can damn well pay for it.”

Having found her feet in the industry, Tara has been no stranger to criticism but praises her family for being so supportive.

“I told my children first after six weeks of being in the industry, I just couldn’t lie to them anymore. I’ve always brought them up never to judge people and accept them for who they are, and that probably worked out in my favor later on in life.”

“Most people, because they knew me for so long before they knew what I was doing said “yeah we can see that”, mainly in the care factor and caring nature for people.”

Putting herself in the public eye has exposed her to some negative comments but she stays strong in herself, using any criticism as motivation to break down the stigma surrounding sex work.

“It’s just people’s ignorance. It’s not that they are being nasty to you. Things are taken too personally. It’s just that they don’t know any different. That’s why we have to talk about it and be educated.”

The media puts sex work in hand with drugs and this couldn’t be further from reality. Choosing to go into the sex industry isn’t something that should open you up to public criticism. Society can’t demand a service and degrade the people who provide it.

“You only hear about the downside to it but every profession has a downside. It’s an industry that’s much needed and does so much good that people have no idea. We all deserve Nobel prizes for what we do in our everyday work at one time or another. We see everybody.”

Tara notes that being a working girl is very different from what you might expect, and it doesn’t just revolve around sex.

“It’s not an easy job and it’s not just sex. There is a lot of sex in it but it doesn’t revolve around sex. It’s more emotional.”

It can take a toll on you, there are some people who have just lost their children and their partner and children all at once and having no one to turn to. It’s listening to their story”

Tara’s clients aren’t the stereotypical men you would picture, having been subjected to the media’s negative connotations of sex work. Children hire her for their fathers if they’ve been widowed or alone for too long and she’s even fulfilled one man’s dream to wake up next to someone on Christmas morning.

These heart-warming stories are the ones that should be at the forefront of this conversation. The intimacy she provides to societies most vulnerable is notable as she works to help isolated people feel less lonely.

Her work as an escort has taught her clients and herself how to love without expecting anything in return. She is empowered by her work and loves caring for people who need it the most.

It might surprise you to know that Tara has not always been this sexually empowered. Self-proclaimed as “Mrs. Missionary’, her journey to being an escort was the key that unlocked confidence she had never known before. Her fear when she started quickly subsided when she made an important self-discovery.

“You get to experiment and try new things. You learn how to read people’s bodies, what works and what doesn’t work. They don’t know who I am and they don’t know I have absolutely no idea what I’m doing so I can do anything because they don’t know me.”

In 2018, Tara decided to write a book entitled Tara – Memoirs From The Boudoir to normalize the notion of sex work and promote healthy conversations around the industry. She hopes that by writing the sequel, Tara: Behind Closed Doors, she can continue to promote her work in a positive light and draw attention to the caring aspect of being an escort. 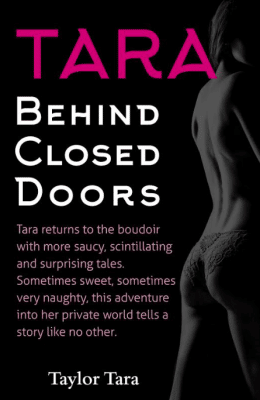 “It has the same stories but different scenarios to make people think and bring table talk. People can actually talk about this stuff”.

She shares her story in the hope that it will spark a conversation and bring awareness to the negative connotations associated with sex, often stemming from ‘abstinence-only’ education taught in schools.

“I used to tell my children not to have sex or you’ll get AIDS and die. That was all I knew. Sex education needs to be more forthcoming. This is a day and age where things do need to be addressed without the giggling and the pointing and the shaming. It’s just a normal part of life.”

Tara will continue to raise awareness by sharing her stories in an effort to promote the sex industry in a positive light. She is successfully changing people’s minds and educating people about the importance of sex workers in our society.

“All sex workers do an amazing job and they do it because they want to do it.”

Taylor Tara has 4 nominations in the Adult Industry Awards. She’ll walk the red carpet on the 16th of October to promote sex work and represent the industry in a positive light.

Join the discussion: What do you think about Taylor Tara’s thoughts?