Men Who Help Out With Housework Get More Sex

Few things are sexier than a man who regularly helps out with the housework, or the child-raising, without even being asked. Forget a dozen roses, chocolates, oysters, truffles or wine (although these have their place) – the most libido-enhancing aphrodisiac is, for many women, a man who happily shares the domestic load.

I fondly remember female lecturers’ ferocious rantings about the “gender segregation of housework” in gender studies at university and with good cause: a new study suggests that men and women could be doing an equal share of the housework by 2050. That’s a hell of a wait ladies!?

And, coupled with the fact that women are still earning markedly less than men – the gender pay gap is 17.5 per cent – that is a bitter pill to swallow.

Interestingly, new research by Cornell University in the US backs my theory: men who help more with the housework get laid more often. However, this greater sexual satisfaction did not extend to men who just stuck to doing stereotypical “manly” chores, such as mowing the lawn.

In addition, the study showed only three in ten couples did equal amounts of housework and in 63 per cent of couples, women did approximately two-thirds of the housework. Gah! So, blokes, how about picking up a mop, putting on a load of washing or emptying the dishwasher without being asked? Would it kill you?Why do so many blokes seem to think housework is “women’s work”?

On the weekend just gone, I watched my husband – who, for the record is usually a fantastic help around the house – have an absolute shocker in terms of the dreaded Husband Housework Blind Spot. I was busy writing inside, while he helpfully played with our two toddlers in the garden, walking with them in laps around the house, in order for them to burn off steam, so I could work in peace and quiet.

However, he walked past rows and rows of dry laundry on the line, as though it was invisible to him. Why are so many men seemingly untroubled by such a sight? If our roles were reversed, with him working inside, I’d have multi-tasked my arse off, with a toddler on each hip and a washing basket full of neatly folded laundry off the line.

And it got me thinking too – is this a good thing? Are we women are own worst enemies because we try to do so much at once? Should we instead make like a man and stick to one important task at a time?

What are your thoughts? Is your partner a household sloth or saviour? Should men and women share equal division of labour in the home? 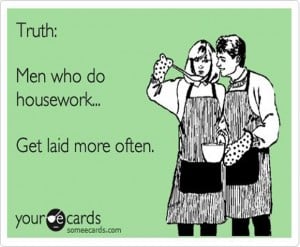 Main image via www.alternet.org and Someecards cartoon from www.pinterest.com