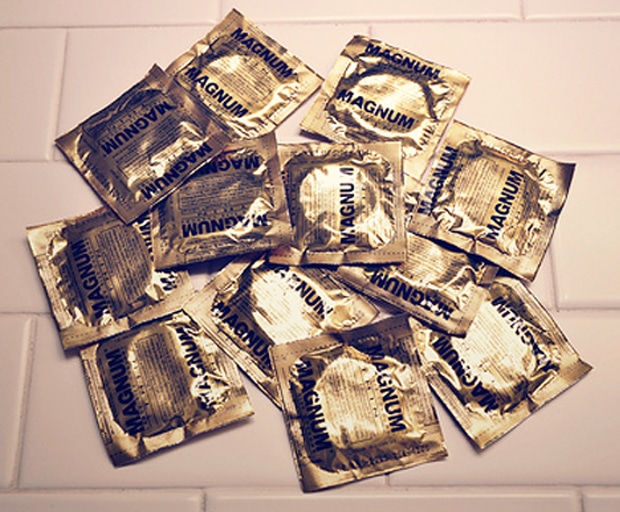 I remember the days when I’d just started having sex.

My boyfriend at the time would tote around a single crinkled condom in his wallet. And although those years were awkward, with fumbling hands and the kind of sex where neither of us really knew what we were doing, we knew for certain if you wanted to get it on, you had to slide a rubber on.

I’d always be so worried about not using one too, with the scary side effects associated with unprotected sex coming to mind. I guess I can thank my slightly misinformed Catholic school education that lead me to believe all sexual acts lead to pregnancy. Add in the images I was confronted with when I Googled ‘What’s wrong with my vagina?’ that time I had a yeast infection, and I’m surprised I’ve ever opened my legs for a man again.

So when did an unplanned pregnancy or incurable disease become sexier than slipping on a rubber?

I understand there’s nothing sexy about interrupting the moment to forage through your nightstand at 1a.m. looking for condoms – it can be a total mood killer – but a health scare would curb my lady boner more than ducking to 7-Eleven in the middle of the night to replenish my rubber stash ever could. I know from experience, good sex happens when you relax, and I don’t know how people can fully immerse themselves in the moment and enjoy the experience if they aren’t using protection.

Among the most prolific I’ve heard to date include, “I’ve had a vasectomy”, “I can’t get it up with a rubber on” and “Let’s just pull out” – because, you know, no pregnancy has ever occurred as the consequence of the ever-effective withdrawal method. *Rolls eyes*

And that isn’t even touching on the scary thought of contracting an STI. But that shouldn’t be a big deal, because they’ve ‘apparently’ been tested (but can’t tell me when that was) and they’re almost certain someone like me would be ‘clean’. But here’s the thing about STI’s: they don’t care if you look like a wholesome good girl or a sex worker. And, PSA: if people have a cavalier attitude about unprotected sex with you, the likelihood is they have it with everyone they encounter.

With condoms low on the trendy scale (because safe sex is apparently so passé), it’s no surprise many people are passing on STIs without knowing it; Chlamydia being one of them. The easily contactable STI can often present with zero symptoms, whilst wreaking havoc on your fertility system. According to the Kirby Institute’s 2016 Annual Surveillance Report, there were over 66,000 notifications of Chlamydia in 2015 in Australia alone last year. They estimate there were 257,245 new cases, including re-infections, by the end of 2015, showing that the vast majority of infections remain undiagnosed. Yikes.

And yet, there’s no reason for the number to be so high when low-cost options like condoms are readily available, and if you’re sexually active, regular STI tests should be the norm. Online healthcare group, Stigma Health, which aims to take the stigma out of getting tested for STIs, know all too well about their prevalence.

“STIs like Gonorrhoea and Chlamydia in particular are issues today that don’t need to be issues, the treatment is simple and effective so why are they running rampant?” says co-founder James Sneddon.

So if we’re careless with taking care of our sexual health, why aren’t we at the very least wrapping the pickle? Stigma Health co-founder, Dr Mitchell Tanner says it could be to do with the focus many young people put on preventing pregnancy through use of alternate contraceptives like The Pill and IUDs, which don’t actually offer any protection against STIs.

“It is a fair statement to say that many young women feel that preventing unplanned pregnancy is the most important thing for them in regards to sexual health, and once this is achieved the other aspects of sexual health are often ignored. Many women simply don’t see STIs as an important health issue.”

I, for one, have never fallen back on the, “But I’m on The Pill” excuse for unprotected sex, but I do know I’m guilty of freaking out more about an unplanned pregnancy than I have over contracting a serious STI. Now I rank both as an equal concern, which is why I’m adamant we need to use protection.

But what about the men who refuse to wear condoms, all because of their pleasure? The kind of men who threaten that sex won’t happen if they have to wear a condom, because they can’t climax when they have one on.

Firstly, although orgasms are pretty rad, they shouldn’t be the sole purpose of your bed time together. And secondly, if we really look hard at that statement, what these men are essentially saying is that sex is just an act for them to get off and women are purely vessels for that act to happen.

I guess this explains why some men feel so entitled to take the condom off mid-act without consent. This form of sexual abuse is called ‘stealthing’, and most frighteningly about this sick new fad, is the fact the men doing it believe they aren’t doing anything wrong. Some even think it’s kind of hilarious they managed to slip off their protection, undetected. However, like many other women who’ve recently become aware of this horrifying trend, I deem so-called ‘stealthing’ a form of rape, largely due to the fact it removes the woman’s ability to consent to the act taking place, by performing it covertly.

I know I’d change my mind about having sex with someone if informed it was going to proceed ahead unprotected. Dr Tanner agrees with my way of thinking, too.

“Whatever the case, the use of the condom was a condition of the consent, be that expressly stated or implied. Removing the condom from the sexual equation changes the variables, and therefore the previous decision to engage in intercourse is no longer applicable, and the consent has to be given with the new terms.”

Comment: Have you ever gotten into an argument with a sexual partner over contraception?